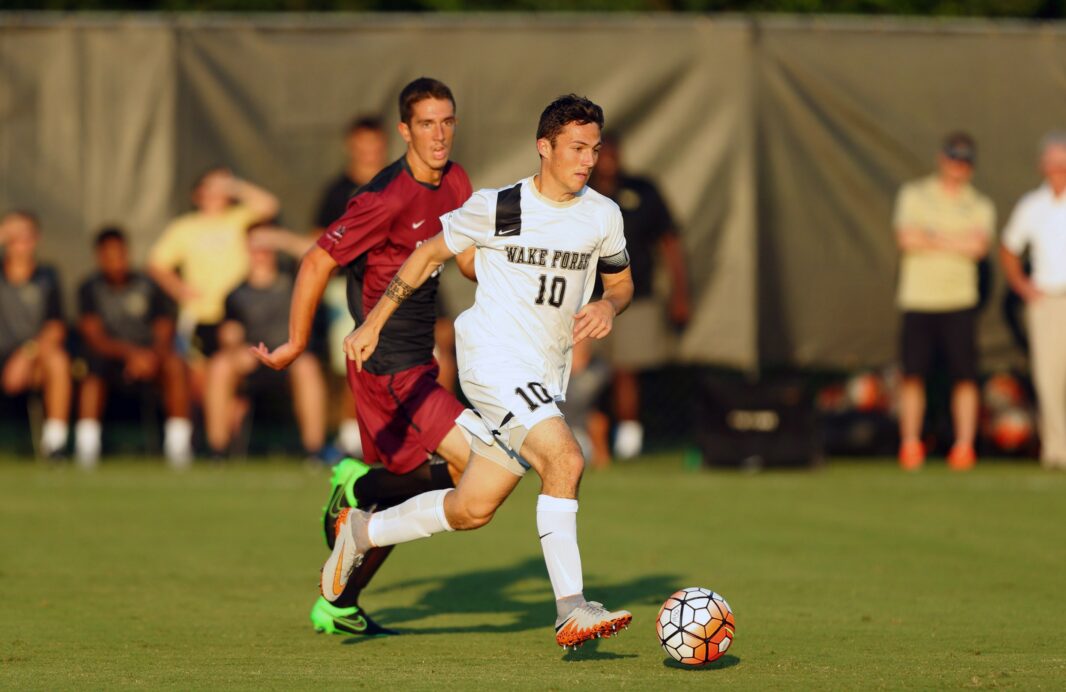 Michael Gamble does not fit the common mold of a tall and physical domestic striker, but that doesn’t deter the Wake Forest senior in the slightest.

Gamble has picked up right where he left off last season, scoring six goals and assisting twice so far and helping Wake Forest win practically week in, week out in the 2015 college season. However, the campaign is halfway complete, and because it’s his senior year, he’s preparing for life after college.

The 21-year-old prospect started to catch the eyes of scouts since he stepped onto Wake Forest’s campus as a freshman. He scored eight times and assisted four other goals that year, but he really started to impress in 2014, when he had a career year for his team.

The senior attacker scored six times and assisted 10 goals en route to being named to the 2014 All-ACC First Team. He is also one of SBI’s Top 30 MLS Draft Prospects ahead of the 2016 MLS SuperDraft. Despite the superb numbers, he stands at just five feet, seven inches, making him undersized for a typical professional forward.

According to his head coach, though, Gamble’s height should not worry anyone, because he offers much more with his play on the ball.

“Michael’s not a prototypical forward,” Demon Deacons coach Bobby Muuss told SBI. “So the people that have him categorized or stereotyped maybe as a forward, I think Michael, he’s got a little bit more soccer than people maybe give credit for. He can play in multiple different positions. I think he can play anywhere along the front four. Depending on the system of play, if you play with two forwards, definitely he can play more as a false 9 with a little bit more of a role of coming back and facilitating the game and where he can turn and face the game.

“Michael plays a lot bigger than he is just because he’s competitive,” Muuss added. “He’s brave, and he’s quick as anything. There’s going to be some big, strong, physical presences like we have in the ACC and in college soccer at the next level, but very few of them are going to have Michael’s quickness.”

A move to Europe’s biggest and brightest leagues is what Gamble wants, but he knows that he may have to take the necessary steps in order to realize that desire. One of those steps to showcase his talent occurred in August.

Gamble was called into the U.S. Under-23 Men’s National Team’s College Identification camp before the start of his fourth college season, and while he enjoyed meeting up with players from across the nation, he saw the time there as more of an opportunity to highlight his own game.

“Obviously, I was really excited going into (the camp), imagining myself up against the best college players, and once I was there, it kind of felt like it wasn’t about that at that point,” Gamble told SBI. “I felt that I was one of the better players there and that what I could really take out of (the experience) was playing in front of the national team coaches, playing in front of a bunch of the scouts, agents and MLS clubs.”

John Hackworth, current U.S. Under-15 Men’s National Team head coach, helped Gamble during the College Identification camp. The former Philadelphia Union boss and Wake Forest player helped his alma mater during the 2014 preseason, and Gamble was glad to reconnect in August, asking for advice on his game ahead of his senior season.

The short but athletic attacker knows his future is in his own hands, though, as words of advice from U.S. senior head coach Jurgen Klinsmann have stayed with him from the USMNT’s camp.

“Like (Klinsmann) said, it’s in our hands — where we want to take our career,” Gamble said. “You know, we can’t really blame anybody else. We’re in this position to get exposure and experience, we just have to make the most of it.”

While Gamble may not be a “prototypical forward,” he has had no problems scoring goals once again this college season. Although he doesn’t fit the common mold, he knows what he does best and will let his goal-scoring record do the talking for him.

“I think a lot of people say one of my biggest strengths is I play with a lot of tenacity, and I think that’s kind of how I am getting into the box,” he said. “That’s how I’ll find my goals.”