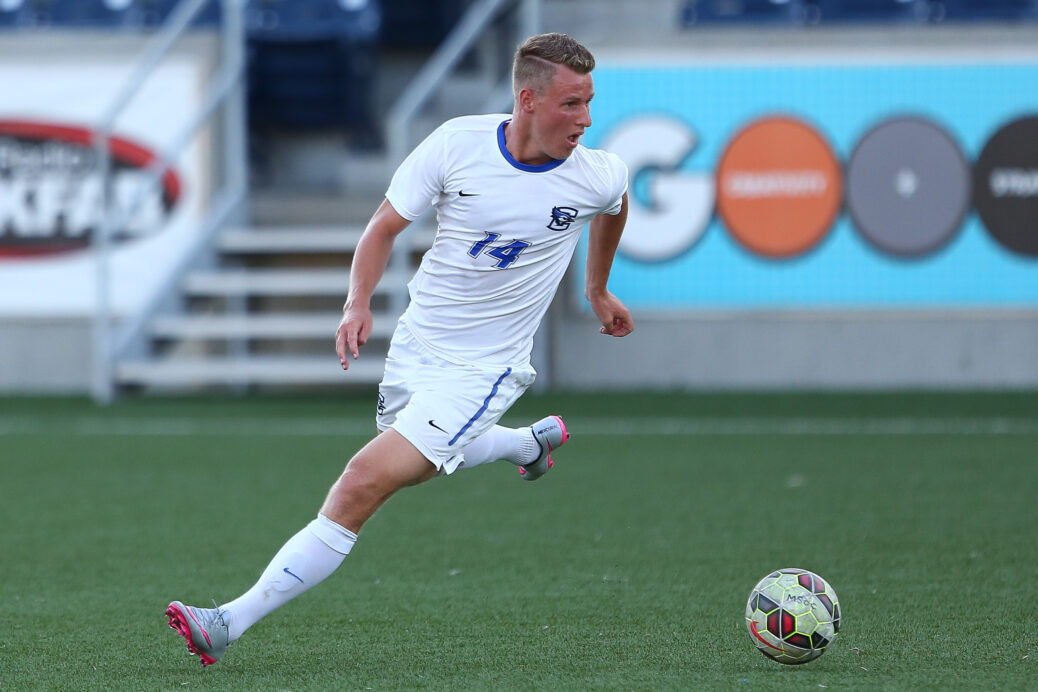 When Fabian Herbers decided to move from Germany to the U.S. to play college soccer, the decision to leave home wasn’t an easy one.

The junior forward has excelled with Creighton since arriving in 2013, though, and despite being halfway around the world from his family, he has created a new one with his coach, teammates and friends on campus.

The Bluejays are currently the only undefeated and untied team remaining in Division I of the NCAA with a 14-0 record, and their success is in most part due to Herbers. The 22-year-old attacker has scored 11 goals and assisted eight times thus far, tied for first and second, respectively, across the nation.

“His talent and ability already separates him in many ways,” Creighton head coach Elmar Bolowich told SBI. “Secondly, the way he sees the game. He sees the game from a very professional angle. He sees things that other players sometimes struggle with even identifying, and he sees them very early so he can make decisions in pressure situations as to what will be the better solution: taking the shot, playing the pass, going on the dribble.

“He’s a very astute and smart player, and obviously, he helps us out defending in that he is very cognizant and anticipates very well as to where the ball is going to go.”

With the help of a system of scouts in Europe, Bolowich had been keeping tabs on Herbers in Germany, as the attacking midfielder appeared 25 times while scoring seven goals and adding 17 assists for VFL Rhede in the fifth tier of German league soccer. The Creighton coach was highly impressed with how Herbers was starting and scoring, and so the decision to bring him to the U.S. was an easy one in his mind.

Despite the Bluejays’ decision to bring him across the pond being easy, learning to adapt to the college game was a little more difficult for Herbers. While Bolowich says the junior has done well becoming a more consistent contributor, the player found the game a little more rough at first than that in Germany.

“The main difference that I experienced was that it is a lot more physical here,” Herbers told SBI. “All of the players are a lot more athletic; they go to the weight room three-or-four times a week and try to get big, try to get fast and strong.

“Back in Germany, there’s more focus on the technical and tactical part of the game. They do everything with the ball.”

While Herbers said he struggled with the “dirty fouls” and physicality at first, his numbers sophomore year showed he had learned how to succeed quickly. He scored 10 goals and added eight assists in 2014.

He went on to receive numerous accolades for his breakout season, including being named a MAC Hermann Trophy semifinalist. Herbers was named to SBI’s Top 30 MLS Draft Prospects list at the beginning of the 2015 season and he’s also a Generation Adidas candidate.

His success on the field in 2014 and so far this season can partly be attributed to Bolowich, who has created a roster that features a handful of foreign players around Herbers.

“I think it’s good to have a little bit of a foreign influence in the college game,” Bolowich said, “because those foreign players bring a different viewpoint about the game.”

That foreign talent includes fellow Germans Felix Kollmannthaler (a freshman) and seniors Vincent Keller and Timo Pitter. The latter of the trio is Herbers’ dynamic partner in attack, and the German connection has helped the pair exponentially excel so far this year. Pitter has seven goals and three assists for the Bluejays thus far.

“Obviously, (Pitter and I) are both from Germany and it’s easy to communicate with each other, and I would say we’re the same type of player. We’re both fast and try to beat the defender and have a good shot as well, so that makes it a little bit easier.

Herbers and Pitter also take the German connection one step further by using the language to gain an edge on opponents.

The connection on the field has translated off of it as well, with Herbers saying that a lot of his free time is spent with his Creighton family — his teammates.

Herbers added that moving to the U.S. was difficult because he was separated from his biological family, but he said they have supported him every step of the way and will continue to do so when and where he decides to play professionally — whether domestically in MLS, back home in Germany or somewhere else abroad.

For now, he is focused on trying to help Creighton maintain an unbeaten record while enjoying his college experience.

“I really like spending time with my friends and teammates,” Herbers said. “I love having long dinners with them maybe before a game or during the week when we have a busy week with exams. I love going out sometimes with them, going to dinner, having a good talk.

“I really just enjoy being with (my teammates and friends) because, I think, after college you won’t have that that much any more, so I’m trying to enjoy every moment with them while I’m in college. I really enjoy hanging out with my teammates. Those are my family, basically, they are the substitute for my family.”