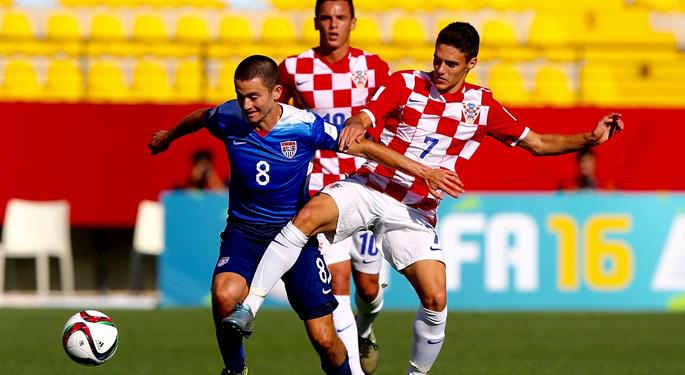 The opening two games of the Under-17 World Cup have left a lot to be desired from the U.S. Under-17 Men’s National Team.

After starting out with a loss to Nigeria, the U.S. squandered a two-goal advantage on Tuesday en route to a 2-2 draw against Croatia. The Americans have looked lackluster so far, to say the least, and a reactive style of play took its toll yet again vs. the Croats.

Still, it’s not all doom and gloom. Christian Pulisic, once again, looked spectacular in creating both U.S. goals, and the U.S. still has a very realistic shot at earning a knockout-round berth.

Here’s a closer look at some takeaways from Tuesday’s draw with Croatia:

Heading into the U-17 World Cup, much of the hype regarding the U.S. was centered around Christian Pulisic.

He has lived up to every bit, if not exceeded it.

Pulisic was integral in both U.S. goals, scoring the first before assisting on the second finish of the 2-2 draw. Overall, Pulisic was dynamic in the opening half before being stifled a bit by an overly passive U.S. team as the game wore on.

Still, Pulisic’s contributions in the first 45 were what would be an ideal sign of things to come. Technically superior to everyone on the field, Pulisic genuinely looks like he wants the ball and, when he gets it, remains calm and collected while looking to pick out teammates.

Even before receiving a pass, Pulisic is always working. The Borussia Dortmund midfielder’s timing and soccer intelligence is impeccable, as Pulisic threatened to open up Croatia’s defense several times in the first half with darting runs into space.

Overall, Pulisic continues to shine with both his technical ability and reading of the game. A true creative, playmaking midfielder, Pulisic has individually shown himself about as well as he could have hoped through two games.

U.S. TOO REACTIVE IN SECOND HALF

There was little of that on Tuesday afternoon.

After going up 2-0, the U.S. all but buckled its seatbelt and prayed for the best. That approach gave the team just one point through two matches while also putting it at risk of elimination.

Throughout the second stanza, the U.S. remained all too content to defend. Conceding 57 percent of possession, the U.S. was outshot 29-6 on the day while conceding a whopping 14 corners.

The U.S. was content with allowing the Croatians to make their mark, and nearly paid for it by almost throwing away all three points. William Pulisic played hero in goal time and time again, while Croatia was just a pair of stoppage-time strikes off the post away from a win. Overall, Croatia deserved more than what it got out of Tuesday’s match.

In the game of soccer, when a team maintains a lead, it can take one of two approaches. You can concede possession and hope to play mistake-free while effectively killing the game, or you can push to kill the game, taking it to a demoralized opponent while ending comeback hopes before they even get started.

The U.S. U-17s, and several teams throughout U.S. Soccer as a whole, can certainly use much more of the latter if progression is to be made as the games wear on.

FORWARDS REMAIN JUST A STEP OFF

A Brandon Vasquez headed finish aside, the U.S. forwards still have left a bit to be desired through two games.

For the second straight match, the U.S. looked lost in the final third for long periods of time. Part of that can certainly be attributed to the team’s bunkering in the opening half, but more work certainly needs to be done atop the field.

Even in the first half, the U.S. attack ran through Pulisic and Luca de la Torre, who were relied upon heavily to weave and create chances. Vasquez took his chance well with a placed header, but aside from that, the team’s forwards never truly threatened.

The most concerning aspect was late in the game, when the U.S. failed to show much urgency in creating. Following Croatia’s equalizer, the U.S. never looked like it would reach the box, let alone score, as balls rolled out of play or easily to defenders with no one displaying the desire or energy to chase them.

Subbed in in the 83rd minute, Haji Wright looked one or two steps slow in his brief cameo despite the fact that he should have been on fresh legs. Josh Perez struggled to find the rhythm that made him so dangerous in qualifying before being sacrificed for defensive cover in the 68th minute.

Overall, the U.S. will need more dynamic play out of its forwards if the team is to have any chance of making a dent in Chile.

No matter the mistakes and missteps, the U.S. still remains very much alive going into the final group stage game. However, anything short of a win will be a disaster.

Luckily for the U.S., the U-17 World Cup allows plenty of wiggle room as four of six third-place teams earn a berth to the knockout rounds. Even with just one point through two games, the U.S. controls its own destiny heading into a clash with host Chile.

That clash, to state the obvious, is vital. A win will propel the U.S. into the knockout stages, where everyone knows anything can happen. A loss, though, will prove damning, not just for the 21 players on the roster, but for U.S. Soccer as a whole given the current climate.

With pressure ramping up on the organization, the last thing U.S. Soccer needs is another big-stage failure. After seeing the senior U.S. side fall to Mexico and the U.S. U-23s falter in Olympic qualifying, a U-17 flame out would be a rotten cherry on top on a horrible month for soccer in America.

Prior to the tournament opener, head coach Richie Williams said his team was not feeling the pressure of having to make up for the older teams’ failures. Yet after two disappointing performances, that may no longer be the case.