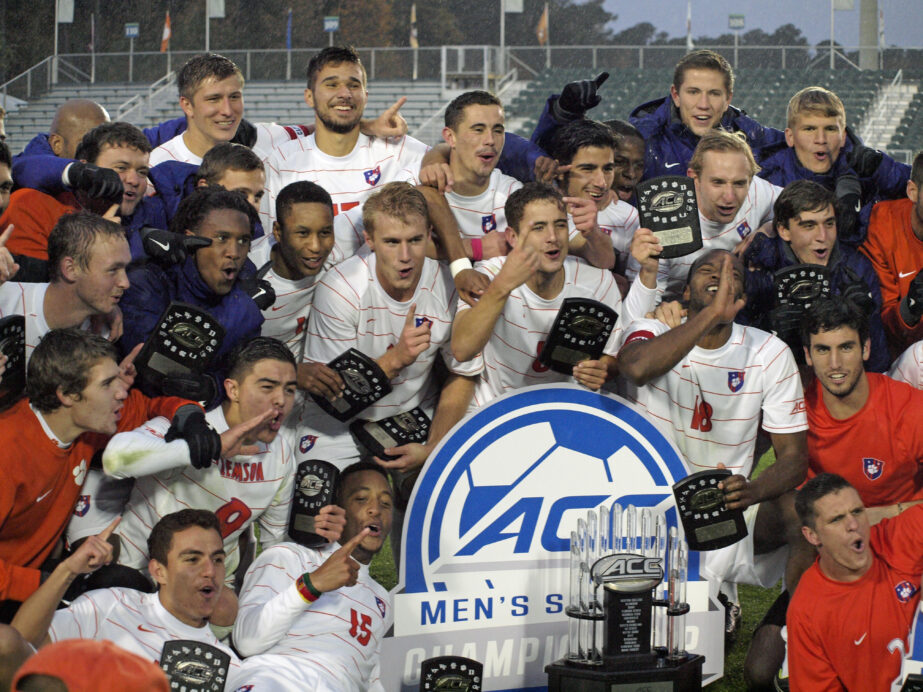 While a handful of coaches from top teams in the ACC say the NCAA title is the most-coveted postseason prize, they all also agree that the ACC Tournament is extremely difficult, possibly even tougher to navigate.

The start of the single-elimination ACC Tournament kicks off on Wednesday with a pair of first-round matchups. Duke hosts Louisville (7 p.m.), while Syracuse battles with North Carolina State (7 p.m.). Meanwhile, the top teams will wait until Sunday to do battle in the tournament’s quarterfinals.

Success in the conference tournament does not always correlate to success in the NCAA championship. Last year, Clemson lifted the ACC title in Cary, N.C., but ACC contender Virginia eventually lifted the College Cup title in the same city at WakeMed Soccer Park. The ACC has a long history of producing top teams, as six out of the previous eight College Cups have been won by a team from the conference, and this year is no exception.

“I don’t know if I’m the only one who speaks this highly of the conference, but I don’t think I am. I think winning the ACC Championship is harder than winning the NCAA Championship because you play, in four games, you play four of the very best teams in America,” Wake Forest head coach Bobby Muuss told SBI.

The Demon Deacons hold the top seed in this year’s tournament, and they will meet the winner of Louisville vs. Duke on Sunday (1 p.m.). Muuss says that no matter who they play, Wake Forest will be heavily tested because he considers the ACC to house a majority of the best players from across the nation.

While he said Bakero should be receiving as much attention as anyone, especially after the way he’s been playing throughout the season, Harrison has developed into a dynamic and electrifying playmaker — a game-changer in the mind of Muuss.

“Jack continues to get better with each and every game, each and every week of training. I think he’s come in and had great success early on, and I think that’s a testament to some of the guys around him that allow him to be able to express himself in the attack the way he does,” Muuss said.

“He’s an extremely quick and pacey attacking player, obviously left-footed, but he can definitely use his right foot just as well as his left, which makes him extremely dangerous and difficult to defend.”

Meanwhile, North Carolina is the ACC’s second seed and will face the winner of Syracuse vs. NC State on Sunday as well (1 p.m.).

“They present different challenges, and I guess that’s a part of the ACC Tournament, it’s that each team presents its own challenges, so pick your poison. They’re both good, but so are we. I think we’ll focus on ourselves, for sure, not knowing who we’re going to play and try to be the best Carolina team that we can be on Sunday.”

Despite playing almost half as many minutes as his fellow forwards, redshirt junior Tucker Hume leads the Tar Heels with nine goals. Somoano says that his physical presence makes him difficult to deal with, and using him more as an impact substitute affords him opportunities to pounce on tired defenses.

Notre Dame, winner of the 2013 College Cup, is the fourth seed in this year’s tournament and will host reigning national champions Virginia on Sunday (1 p.m.).

The Fighting Irish failed to maintain their dominance throughout the whole 2015 season, winning only twice in their previous seven games. The Cavaliers did fall, 3-1, to the Fighting Irish at the end of September, though, and have not had a true goal-scorer step up to lead them. Sophomore playmaker Jake Rozhansky has a team-leading three goals this season, while the Cavaliers as a whole only scored 22 times — 11 fewer goals scored than the Fighting Irish.

“We have to keep games tight. We are not, like last year, a high-scoring team,” Cavaliers head coach George Gelnovatch told SBI. “I do think we compare to last year. We do have some good, young attacking talent in guys like Derrick Etienne, Edward Opoku and Jean-Christophe Koffi. These are very good guys who are playing a lot of minutes for us, and they each have a couple of goals.

“These games are going to be small margins,” Gelnovatch added. “I think the nice part is for all of the teams, even the teams that are playing (Wednesday) night, nobody’s getting hurt in terms of (NCAA) RPI, so even if you lose, because you’re playing against a high-RPI team, you’re not going to take a hit in your RPI. This time of year, if we go to South Bend again and tie or lose to Notre Dame, you could actually move up in the rankings just by virtue of playing on the road against that high of an RPI team.”

Currently, Notre Dame is sixth in the latest NCAA RPI rankings, which were updated Monday and are used to determine at-large berths for the postseason tournament. Wake Forest, Clemson and North Carolina are ranked first, second and third, respectively, while Boston College is 16th, Virginia comes in at 23rd and Louisville is the seventh ACC team in the top 25 at No. 25. Conference USA has the second-most sides in the top 25, yet it only boasts three teams in this week’s rankings.

Finally, Clemson claimed the tournament’s third seed and will host Boston College in its quarterfinals matchup to begin its title defense.

“We were very, very happy that we were able to secure one of the four home seeds, and I think that when you’re looking at a tournament like this, that’s critical,” Tigers head coach Mike Noonan told SBI. “You’re going to play a great team, good teams, so it’s not necessarily about who you play because they’re all going to be good, it’s where you’re playing, and we open up at home against a very good BC team.

“If the seeding stays true, then we have to go on the road to play North Carolina, and that will be a very difficult game. But it’ll be a great game because we didn’t face North Carolina during the regular season.”

The Fighting Irish are the only team to usurp the Tigers this year, posting a 1-0 win in South Bend, Ind. on Sept. 12. Noonan’s men won’t meet them again unless they both reach the final, but the head coach says he and his team are ready to take on anyone in the ACC, including a Boston College side that he feels is a little underrated. With a sturdy defense playing extremely well behind the multitude of goal-scorers on the team, Noonan says he is hoping for another good run from his side, in spite of obvious challenges they will face along the way.

“What people ignore is the fact that we’ve only given up 0.6 goals a game,” Noonan said. “Kyle Fisher, a central defender for us, and Andrew Tarbell, our goalkeeper, they’re All-ACC performers from the last couple of years, so they tie it down in the back, and T.J. (Casner) has certainly come through with some timely goals.”