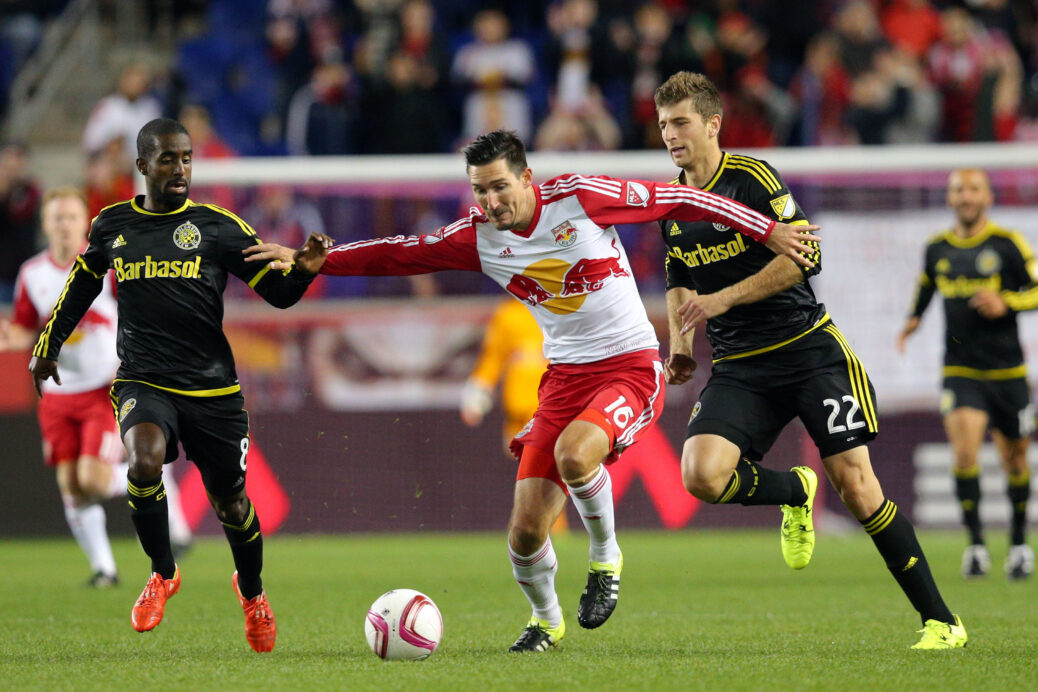 Ask about the Columbus Crew’s successes in 2015, and most people will point to the attacking duo of Kei Kamara and Ethan Finlay. Some might even throw Federico Higuain into the equation.

It has not just been the Crew’s offensive-minded players that have gotten the club this far into the playoffs, though. The defense has also contributed in a major way, which is something that the New York Red Bulls are well aware of.

The Red Bulls and Crew are set to meet in the first leg of the Eastern Conference finals in a little more than a week, and both teams will enter confident after winning at home in their decisive legs in the last round. The Red Bulls defeated D.C. United, 1-0, on Sunday to win via a 2-0 aggregate score, while the Crew survived the Montreal Impact by picking up a 3-1 victory in extra time that gave them a 4-3 edge on aggregate.

The Crew will be feeling especially good about their chances given the job their defense did on Impact forward Didier Drogba. Few teams have been able to stymie dominant Drogba over the past couple of months, but he was held scoreless and largely in check over the course of the 210 minutes of the Eastern Conference semifinals.

Yes, the Crew had some costly, self-inflicted hiccups at the back, but the overall performance put forth by the defense was noteworthy. So much so that that the Red Bulls know that they are in for a real test when the first leg vs. the Crew kicks off at Mapfre Stadium in Columbus, Ohio, on Nov. 22.

“I think since (Gaston) Sauro has joined the team, he’s tightened things up,” said Red Bulls head coach Jesse Marsch when asked about the Crew’s back line. “He’s a physical defender, he’s a pure defender, he takes defending personally. Now, he’ll be out in the first game (due to yellow card accumulation). Whether it’s Tyson Wahl or (Emanuel) Pogatetz that steps in, they are still defenders who are good with the ball but also understand how to handle moments of transition.

“In that series, I thought they did a very good job of dealing with Drogba, of not given away too many big chances. But we also know that with the way we play it’s going to test their back line. We’re going to be very, very aggressive, to press their back line, to go at them, to play vertically. Again it sets up for, I think, a very good series.”

The Red Bulls, whose defense has posted back-to-back shutouts to start their playoff run, also know that it has to be very sharp at the back. The Crew boast a talented and deep crop of versatile attackers, and Kamara and Finlay have both been consistent game-changers for the club this year. In fact, both of them found the back of the net in the second leg vs. the Impact this past weekend.

It was Kamara, however, that had a bigger stamp on the game. The forward, with 22 goals during the regular season, bagged a brace in the Sunday showdown, and his two-goal outing included a headed winner that came only after he had botched a penalty kick attempt.

A wily veteran who boasts athleticism, size and a nose for goal, Kamara should prove a handful for the Red Bulls’ defenders. Marsch still sees his central defenders — especially the imposing Ronald Zubar — providing a good matchup.

“Ronald is our best defender in the air, even if you look by the statistics,” said Marsch. “His percentage of winning aerial duels is the highest of (our top three centerbacks), and even just watching him you can see he’s very good in the air, he wins those battles. With the way we play, we force teams often to play direct or long. It’s a benefit to have centerbacks who are in good in the air. Obviously, that’s a big strength of Ronald.

“The other part for dealing with Kamara is that Columbus is leading the league in crosses. That’s where they get a lot of their offensive production because now they are creating advantages in wide spots and then running players in the box, specifically Kamara. The goal that gets Columbus into the Eastern Conference finals is Kamara leaping and a doing a good job in the box to now get on the end of a ball and score a good goal.”

Admittedly, the Red Bulls expect a much different series vs. the Crew than they had against the more-defensive-minded D.C. United. The Crew will want to try and attack and win the possession battle more than D.C. United, and the Red Bulls know that they themselves will have to raise the bar if they are to come out on top and reach the MLS Cup final.

“Now in the Columbus series, this series is going to involve a lot more soccer,” said Marsch. “I think that, again, that will be a big challenge for us, but one that we’re excited about and one that will be very entertaining. I think for soccer fans, and MLS fans, this series sets up to be very interesting: two good teams, two talented teams, two well-coached teams.

“In all ways now at the end of the year, it’s a big series between two very good teams that are going to throw everything at each other and that play very different styles. We’re looking forward to it. We have a lot of respect for Columbus. We know it’s going to be a great series, but we think we’re up for the challenge. It’ll be fun.”