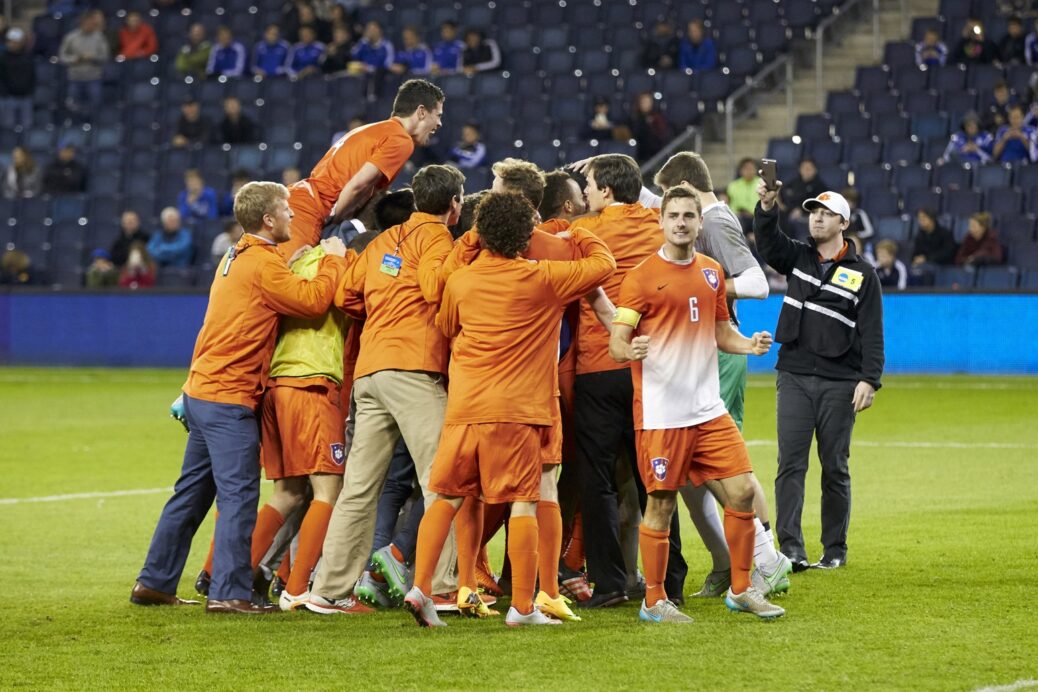 The path taken wasn’t easy and always pretty, but the Clemson Tigers are back in the College Cup final.

For the first time since 1987, the No. 2-seeded Tigers advanced to the NCAA Tournament final where they will play Stanford. Thanks to the stellar play of goalkeeper Andrew Tarbell, as well as the calmness of Clemson’s field players, the Tigers secured a 4-1 penalty kick win over No. 6 Syracuse after a 0-0 tie.

“The game of soccer is cruel sometimes. We are very happy that we advanced, but you have to give a  lot of credit to Syracuse,” Clemson head coach Mike Noonan said in a press conference after the game. “They played exceptionally well. They made it very difficult for us. Both teams know each other really well.”

German-born playmaker Julian Buescher proved the be the most dangerous player on the field at Sporting Park on Friday evening. On the other side of the ball, though, senior centerback Kyle Fisher was the best defender, closing down open space while making strong tackles throughout the 110 minutes of play.

In penalty kicks, Iman Mafi converted first for the Tigers, and Tarbell saved the Orange’s first chance, setting the tone for the rest of the shootout. After Michael Melvin scored, Buescher blasted in the Orange’s only conversion of the shootout. Oskar Sewerin missed wide, while Thales Moreno and T.J. Casner sealed Clemson’s advancement into the College Cup final on Sunday (2 p.m., ESPNU).

“They had us scouted pretty well in wide areas and places that we like to play soccer,” Casner said of Syracuse following the semifinal. “We are normally at our best when we can keep the ball in the attacking half of the field and that’s something that we didn’t get to do a lot of today. Their pressure was good through our forwards and on our backs. We didn’t really get any combination play or movements like we normally do.”

With minutes remaining in regulation, Tarbell came up huge for the Tigers. He came off his line quickly and made the most important save of the night on Ben Polk. Both sides failed to produce any more solid chances, including through the two 10-minute extra time periods.

“We’ve talked about three things through the course of the year,” Noonan said. “We talked about being ruthless, being relentless, and being resilient. We were certainly resilient today.”

For the first time in history, both College Cup semifinals ended in a 0-0 tie. However, following a tough battle and 10 rounds of penalty kicks, the No. 8 Cardinal won the shootout, 8-7, vs. No. 4 Akron.

“For a good part of the game I thought we were the better team, but as the game went on there were chances on either end. It could have gone either way,” Stanford head coach Jeremy Gunn said in a press conference after the game. “So proud of the team the way we fought through and kept our nerve. Hopefully a great advert for soccer.”

Foster Langsdorf came close to ending the game with a golden goal moments into the first extra time period, but was denied by Zips goalkeeper Jake Fenlason. For the most part, the Cardinal, especially Jordan Morris and Langsdorf, showed more creativity in attack, but they lacked the final touch.

In the 26th minute, Stanford distributor Corey Baird was the first player to attempt a shot on the evening, but his effort sailed well wide of the mark.

Langsdorf, however, found himself in a one-on-one situation in the 33rd minute. It was the best chance of the half for either side, especially given that Akron attempted no shots at all in the first 45 minutes. Fenlason made a fantastic save, though, quickly diving down to his right to stop the low blast from flying into the back of the net.

“Akron is good on the ball and broke our pressure a lot of times, but it’s a credit to us for rolling up our sleeves and getting the job done,” Brandon Vincent said following the match. “We are sticking to the task and not giving them many chances on goal and that’s a big part of our back line being successful and Andy coming up big when he needs to.  I’m happy with the way we performed.”

The Zips finally recorded their first shot in the 57th minute, and six minutes later, Adam Najem ripped a shot towards goal that was deflected. Many on Akron claimed that a hand was used to block Najem’s shot, but play continued.

Richie Laryea, who scored 11 goals and provided seven assists prior to Friday’s game, sparked most of the Zips’ chances throughout regular time. Laryea arguably had the best chance to end the game in extra time as well, as he sprinted towards goal and sent a low shot on frame. However, Cardinal netminder Andrew Epstein made the important stop.

“We have a wonderful history within our program,” Gunn said. “Lots of great coaches and great players, but when you are in the moment it’s all about the team you have right now. You try to set goals that you want to have and this group was flat out, let’s play as many games as we can together. We’ve done that and now we are in the final and want to get greedy and win it.”

What did you think of Clemson’s and Stanford’s advancement? Who do you think will win the final?