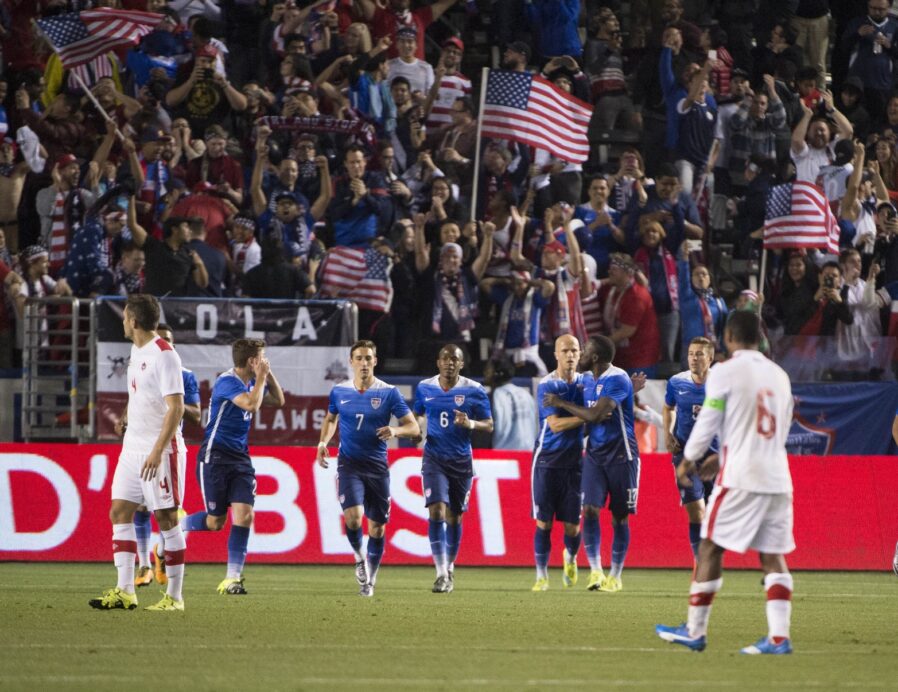 Carson, Calif. – After opening the 2016 campaign with a late win over Iceland, the U.S. Men’s National Team repeated the feat Saturday against Canada.

Relegated to the bench after starting last time out, Ethan Finlay did not take long to have an impact on Saturday night.  Subbed on in the 87th minute, the Columbus Crew winger corralled a long ball on the left flank from Michael Bradley, and with his second touch, rifled a cross onto the head of Jozy Altidore. The forward leapt at the six-yard line and headed the ball neatly into the corner to give the U.S. a deserved 1-0 win against a lackluster Canadian side that showed little desire to press the attack.

Keeping a spine of veteran players – Jozy Altidore up top, Mix Diskerud and Michael Bradley in the middle, and Matt Besler and Jermaine Jones paired as center backs – Klinsmann sent out waves of young talent on the edges of his 4-4-2 formation and allowed them to run free.

It made for a spotty affair, with the U.S. on the front foot for almost all of the night, outshooting Canada 18-4 but just as frequently fumbling the ball away in the final third.

Altidore had one of his more active nights of late, manufacturing five shots of his own while working to keep his younger teammates involved in the attack.  His hard work paid off when he sealed the victory in the final minute, earning Man of the Match honors.

The Toronto FC forward came close to netting a few minutes before the eventual winner, when he pulled down a long ball at the edge of the area and attempted to chip Canadian goalkeeper Maxime Crepeau, who was caught well off his line.  The lob had a bit too much air under it, however, and Crepeau was able to race back and bat the ball out of play just a yard shy of the goal mouth.

While Altidore grabbed the headline with his late tally, several USMNT prospects shined on the night. Jordan Morris was active in the attack, and tenacious in his high pressure of the Canadian back line. Lee Nguyen  showed well too, controlling the attack and generating multiple chances for the US with smart passing. David Bingham, meanwhile, earned his first start in goal for the senior team, and while he had little to trouble him on the evening.

As the game wore on, Canada backed further behind the ball, spending large chunks of the second half with only a lone striker, Orlando City’s Cyle Larin, in a forward position.

This gave the US considerable possession in the Canada half of the field, but multiple promising forays were undone by poor touches in the final third by the gaggle of youngsters Klinsmann had on the pitch. Gyasi Zardes started and played well at times, in particular when he sent in a quick through ball onto the foot of Altidore that created the USMNT’s first shot of the night, but also saw several opportunities evaporate when he couldn’t hang onto the ball.

Overall, however, Klinsmann and his squad left the pitch all smiles, happy that they could nab a result at the end of a long month in California.  The USMNT will reconvene in the spring when they resume CONCACAF world cup qualifying against Guatemala on March 25th.