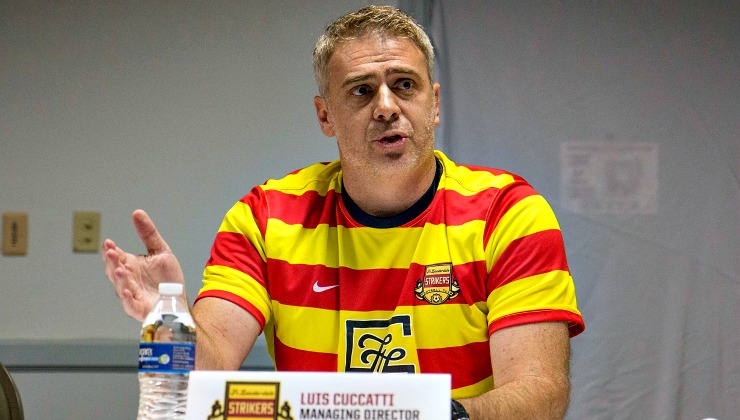 Soccer clubs are a business, albeit ones that are very different than the companies that hold brick and mortar locations on busy streets, and the Fort Lauderdale Strikers believe they have found a take on the soccer business that is perfectly suited for the NASL and American soccer as a whole.

As members of the NASL, the Strikers have previously operated on an eight-to-nine-month schedule. The season kicks off in April with a summer break in the middle before wrapping up with the postseason ahead of the winter months. But with that schedule comes challenges, both on and off the field.

To combat all of the downtime, the Strikers have moved to a 12-month plan that will see the team on the field for a majority of the year. Starting with this past month’s Florida Cup, the Strikers will be active throughout the year, including a preseason trip to China and a June visit to Brazil. With those moves, the Strikers can keep players fit and focused, while also finding new ways to monetize some of the dead months in new markets.

“If you are looking at this business, each owner has their own targets and objectives,” Strikers managing director Luis Cuccatti told SBI. “The goal of the Strikers owners is to make sure that this team is active for 12 months and is relevant in markets like the U.S., Brazil and China and is generating revenue every month. That improves our brand equity. When our team is not playing, we’re not making money, and that impacts our brand.

“We are redesigning this whole thing to fill the gaps that the NASL calendar gives to us. We can play in tournaments with the help of (team owner) Ronaldo. The way we did the planning this year, I have high expectations for April because the team will be ready. I want to see the team perform at the highest level on April 2. We cannot afford the team performing 30 or 40 or 50 percent and getting better. I want to be a champion, and then we go to a new cycle and we’re up again going into a new year. That’s the cycle that we envision here.”

Cuccatti says that international relevance begins with events like the Florida Cup, which saw the Strikers take on Germany’s Schalke, Colombia’s Santa Fe, Brazil’s Corinthians and Ukraine’s Shakhtar Donetsk. Broadcasted in countries throughout the world, the event served as a showcase of the players, the team and the league, while also monetizing a January month that is normally a dead zone in American soccer.

Referencing Corinthians as an example, Cuccatti said the Brazilian club has 80 games a year on the club’s calendar, significantly more than the 30 or so guaranteed by the NASL and U.S. Open Cup schedule. Cuccatti says that the team will be prioritizing the U.S. Open Cup even more this season, but the idea of playing more games in a variety of places are necessary for helping the team grow.

Next up for the Strikers is a trip to China, which will see the team go abroad from Feb. 28 to March 12. While there, the club will train in four cities and play several friendlies. In addition, the club will work with owner Ronaldo’s R9 academy to stage a series of tryouts to add a Chinese player to the club’s roster.

“This is an American company owned by Brazilians,” Cuccatti said, “and we see the Strikers U.S. as our headquarters. We’re looking to expand that, expand to markets where we do have things in place and can do some good things there. There are markets where Ronaldo has opened doors with the R9 academy and we are coming behind with the Strikers, like in China and India. Those are markets that we want to play a role in and are markets, like China now, spending a lot of money on soccer, and you need to be visible and relevant in those markets.

“Those are the things that you need to do beyond the NASL,” he added. “We need more people talking about the NASL and making the league relevant, because every time that you do that the team increases in value.”

While Asian expansion and strengthening the club’s perception in the U.S. remain a focal point, furthering the club’s reach in Brazil remains a major priority. With Ronaldo as owner, the club has already made significant waves in Brazil with regards to TV deals and branding efforts.

Most recently, those efforts have yielded a multi-year, multimillion dollar kit sponsorship deal with Brazilian drink company Guaraviton. As a result, Guaraviton is set to open a factory in Miami while expanding into America. Meanwhile, the Strikers will receive five percent royalties on a club-branded drink in addition to the club’s multimillion dollar sponsorship fee.

Cuccatti says that the deal is “extremely important” for the club, and is one step towards continuing the club’s push both on and off the field. The next step, Cuccatti says, doesn’t come in the boardroom or with a sponsorship agreement, but rather on the field.

Along with Ronaldo, Cuccatti says he has had talks with NASL commissioner Bill Peterson with the aim of getting the league’s teams into international competition, like the Copa Libertadores or CONCACAF Champions League. Cuccatti says the discussions have been “positive,” but there is still work to be done with regards to getting into competitions that the Strikers believe can change the fate of the league.

“One thing that I have been talking to Bill about is that the NASL needs to open doors to other teams,” Cuccatti said. “If you are a champion of the NASL, what does that mean? You don’t get any money. You don’t get access to a tournament. That’s what you should get. I want to go to the Libertadores, I want to go to the CONCACAF Champions League, because that’s where the big money is. The NASL needs to provide that. If you are NASL champion, we need to qualify for those tournaments.

“If we make that happen, then I see this league exploding. That will open doors to different things. Sponsorships become easier. Attracting talent becomes easier. Everything becomes easier because you’ll be exposing your brand to big tournaments and playing against big clubs. You don’t create a business to play only in the NASL. You want to pursue something big. I’m not saying the NASL is small, but the NASL needs to open doors to other things.”

With international aspirations aplenty, the Strikers still remain focused on the here and now just as much as their lofty goals for the future. At the end of the day, Cuccatti says he is responsible for making sure the product on the field is good enough to convince fans to come watch.

To that aim, the club has concentrated on infrastructure in the aftermath of a complete restructuring to a board of directors. Cuccatti says that work is being done on a new performance lab as a new training facility that the club believes will give players everything they need to perform at the optimal level.

With a 12-month schedule on the horizon, the Strikers will need every advantage they can get, as the club looks to make waves all over the world while remaining relevant in the local Florida soccer scene.

“That’s my biggest challenge today,” Cuccatti said. “People there are 5,000 miles away watching our games. People there are not coming to our stadium, and that’s where I have been investing time to change things like that. We have the right tools and people in place to change, first of all, the product, which looks very good. We expect the team to perform well, and that should attract more people by just playing good, quality soccer by performing well with a championship mentality. That’s one piece of the equation.

“The other piece is showing additional value to people with the whole experience and everything that the Strikers can do for them on a Saturday night that they can exchange money for value. That’s my biggest challenge today: to nail down any awareness with the local commitment to the Strikers, and those are the things I’m working on right now.”