Klinsmann not promising Howard, Guzan spot in goal for USMNT 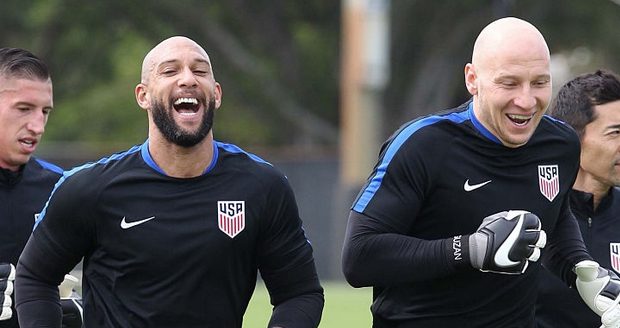 For the past several years, the U.S. Men’s National Team’s goalkeeping position has been a battle between Tim Howard and Brad Guzan.

Howard was given the majority of nods to start, and Guzan served as the capable backup. Yet, the tide appears to be changing, as the two goalkeepers have struggled for minutes in recent months and are not getting any younger. Howard turned 37 on March 6, while Guzan will be 32 in September. U.S. head coach Jurgen Klinsmann is looking at the next generation of netminders to potentially take over, and thinks they are capable of doing so.

“There’s a reason why we have four goalkeepers in this camp because we’re trying to also look into the future, and the future is David Bingham, the future is William Yarbrough and other young goalkeepers coming in — Ethan Horvath, who’s playing for the Olympic team,” Klinsmann said ahead of Friday’s World Cup qualifying contest vs. Guatemala in Guatemala City (10 p.m., beIN Sports/NBC Universo).

Bingham has looked strong in goal for the San Jose Earthquakes to start the 2016 MLS season, while Yarbrough has performed equally as well for Club Leon south of the U.S. border.

“We have the highest respect for Tim and for Brad Guzan, so they’re leading that group (of young players),” Klinsmann said. “So we want to see our younger goalkeepers grow. Every time they are here in the group, we want them to make an impression. We want them to become more confident and more mature.”

Klinsmann did not confirm who would be starting in goal for the Americans come Friday. While Howard appears to be the obvious choice, given his experience, the Everton — and soon-to-be Colorado Rapids — goalkeeper is not a lock. Howard has not played a game for Everton since Jan. 24.

“Having a player like Tim Howard back in our group is huge because his experience now. Is it more ideal if he plays? Absolutely,” Klinsmann said.

“But if he doesn’t play, he’s (37) years old, he’s played I don’t know how many hundred games in the Premier League and before that in MLS, so he knows how to deal with that situation (of not being selected on gameday). He’s calm. He’s professional, he’s a top, top professional.”

Guzan, who would normally be next in line to start, has also had struggles with his EPL club, Aston Villa. Guzan did not play an EPL match for approximately two months after the club suffered a string of losses. Aston Villa currently sits on the bottom of the league table, and is set to be relegated to the English Championship.

For the longest time, it seemed as though the USMNT’s regular No. 1 and No. 2 goalkeepers were to enter the first two World Cup qualifiers of the year having only a few games under their belts, but Guzan did recently regain his starting spot for Aston Villa. He and the club haven’t done any better in the four games he has appeared in this month, though, conceding 10 goals while losing all four games.

“That will sort itself out by the time the games come around,” Guzan said of the competition for the starting spot, “so we’re all focused in terms of preparing and making sure we’re all ready to contribute in whatever way we can.”

Despite his struggles, Guzan is prepared to play if selected by Klinsmann, and he believes experience playing in the region will be a much-needed asset for the team.

“I think we all know what these games mean and what they are about when you go down to some of these countries down in Central America and how hard they actually are. We’re going to have to use every bit of experience, every bit of knowledge, every bit of togetherness that we have to try and get a result.”