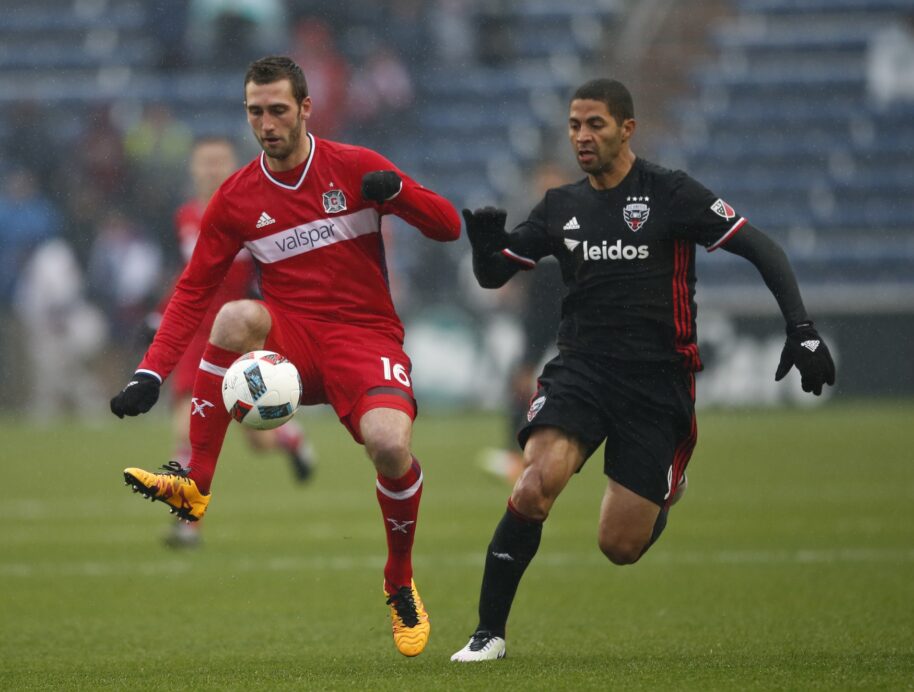 BRIDGEVIEW, Ill. – For the second consecutive match, the Chicago Fire dropped home points from a leading position. This time, they were undone by a familiar face.

D.C. United’s Patrick Nyarko, who spent the last eight seasons in Chicago, headed home a Luciano Acosta cross in the 64th minute to cancel out Jonathan Campbell’s first-half goal and earn D.C. United a 1-1 draw at Toyota Park on Saturday.

“It’s just kind of how soccer works doesn’t it?” D.C. United head coach Ben Olsen said. “You know he’s going to come back and get something just like I’m sure (Chris) Pontius at some point is going to get ahold of a goal against us. It seems that’s how this league goes. I’m happy for him, I know he’s really proud of his time here in Chicago, and I know the people have a lot of respect for him.”

After 40 minutes devoid of much going forward, the Fire went ahead in the 41st minute. Arturo Alvarez took a free kick from the left wing and curled a left-footed cross into the box. The ball bounced once before Campbell, streaking across the edge of the six-yard box, caught it with a flick of his right foot and sent it past D.C. United’s Travis Worra.

The 22-year-old barely broke stride before sliding across the wet grass into the corner flag, celebrating his first professional goal.

“It felt great, but all credit to Arturo playing that ball in behind,” Campbell said. “I just had to flick it on, but it was a great feeling.”

Besides the goal, the opening half didn’t include much offense. Chicago (1-2-4) controlled 53 percent of the possession, but managed just four shots, and Campbell’s was the only one on target. D.C. United had three shots, two of which were on target.

The visitors were better in the second half, however, and within 20 minutes, they had found a tying goal. In the 64th minute, DCU played a short corner to Acosta at the edge of the 18-yard box where he sent a cross in. Nyarko got his head to it before a diving Matt Lampson could punch it away.

Nyarko’s second goal of the season proved to be enough to earn D.C. United (2-3-4) a draw.

The Fire nearly grabbed a winning goal in stoppage time. Alvarez split the D.C. United defense with a nice through ball on the counter, but Worra claimed it before Joey Calistri could get there.

“No doubt that we wanted to win this game more than anything,” Fire head coach Veljko Paunovic said. “We had the opportunity, it was there, but still we have to understand that we are a young team, a team in the process which requires a lot of effort to win games.

“I’m happy with one point. Of course they also had good opportunities to win the game, and I think that’s where we are at this point. We have to build that momentum that we had in the game against New York, momentum where we close to get to the next level, after that game and the next game against Montreal that hurt us a lot, but now we are recovering from that. I think that our team, at the end it was a fair game and a fair result.”

In the 64th minute, D.C. United’s Patrick Nyarko marked his return to Chicago with a game-tying goal.

D.C. United forward Alvaro Saborio whiffed on a shot in the box during the first half and had a team-low 17 touches in the opening 45 minutes. He finished with just one shot.