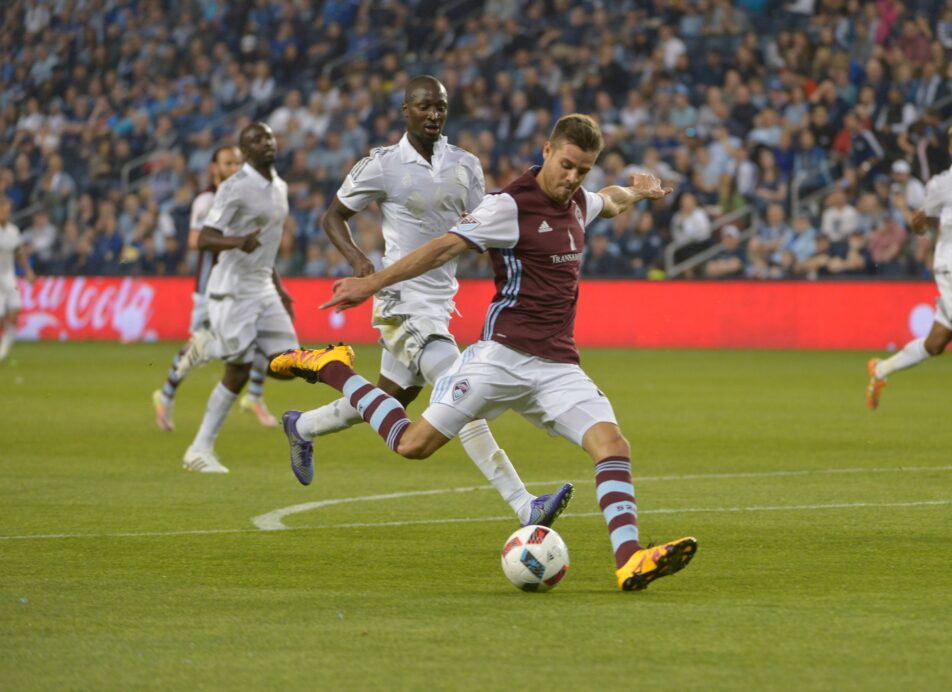 Coming off a stellar performance in New York over the weekend, Sporting Kansas City returned to Children’s Mercy Park Wednesday night with a slightly weakened lineup to lose 2-1 to the Colorado Rapids.

Connor Hallisey whipped in a cross to the head of Dom Dwyer, who headed it past Rapids goalkeeper Zac MacMath in the 76th minute. The equalizing goal came after a barrage of shots from Sporting.

The equalizer went to waste for Sporting though, as Shkelzen Gashi scored to make it 2-1 in the 82nd minute. Sporting KC goalkeeper Tim Melia made a save on Dillon Serna’s long range attempt, however, the follow-up could not be reached.

Sporting began the match with some starting players missing. Dwyer didn’t start but entered as a substitute in the 57th minute. Benny Feilhaber also entered the match as a substitute at halftime. Center back Matt Besler was out of the gameday lineup for Sporting.

Holding the upper hand from the halftime break on, Sporting dominated the Rapids in the second half up until Gashi’s goal.

The Rapids claimed the first-half lead in the 41st minute as Luis Solignac scored after Marco Pappa collected the ball from Sporting KC’s Lawrence Olum. Olum was unable to find a pass in time and exposed the Sporting KC defense to a killer pass from Pappa to Solignac. Solignac finished to the near post for the 1-0 lead and the first shot on goal of the game for the Rapids.

Sporting came into the second half with a lot more energy. Chasing a goal, Sporting found a few chances early on. Diego Rubio saved a ball off the endline and nearly scored, hitting the bottom of the crossbar, in the 47th minute. After Sporting cut out a Rapids breakaway in the 52nd minute, Graham Zusi nearly scored with a shot from inside the box that Lawrence Olum tipped over the bar from an unbalanced position at the back post.

With the first goal of the match came from a difficult angle and a nice pass from Marco Pappa, Luis Solignac takes tonight’s Man of the Match. Solignac was a dangerous forward for the Rapids and exploited the lack of defensive discipline from a Sporting team that was missing one of its leaders in Matt Besler.

Sporting came extremely close to equalizing in stoppage time. Brad Davis found Sporting’s last chance with a shot that smacked the corner of the crossbar and the post from a cross. Other close chances to score and make it a different result for Sporting include Diego Rubio’s tight-angle shot that hit the bottom of the crossbar.

In his second start since re-joining Sporting KC, Lawrence Olum had an off night. Giving away the ball that led to the Rapids’ first goal. Filling in for Soni Mustivar, who is injured, Olum had trouble stopping the Rapids’ offense from reaching the center back pairing of Nuno Andre Coelho and Ike Opara.