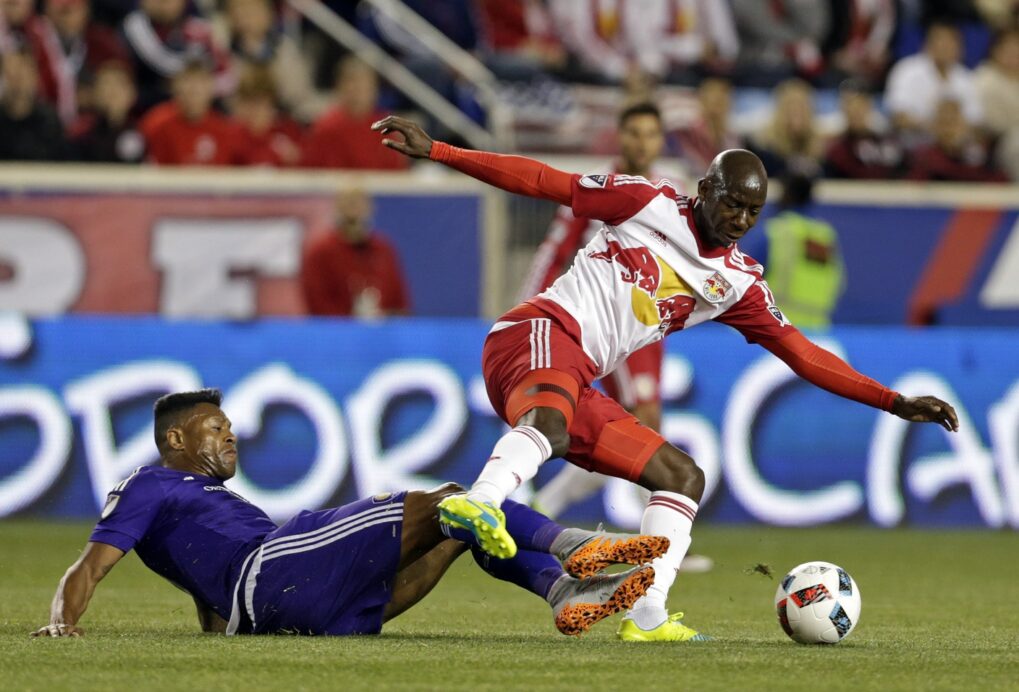 The New York Red Bulls registered three second-half goals against Orlando City, in a controversial 3-2 comeback victory. The win gives the Red Bulls their second of the season, pushing them off the bottom of the Eastern Conference standings.

Orlando City opened the scoring after just three minutes, when Rafael Ramos played a low cross into the path of Cyle Larin. The Canadian striker guided the ball home comfortably for his fourth goal of the season.

Mike Grella started the attacking onslaught for the Red Bulls in the 65th minute, after Sacha Kljestan picked out the midfielder for his first goal of the year. Bradley Wright-Phillips doubled the team’s lead four minutes later, when Grella’s goal-bound chip to the far post found the Englishman’s foot.

Orlando City came close to a second goal moments before, when Larin was sent forward to chase a long ball. The 21-year old was involved in a tight back-and-forth challenge with Red Bulls defender Karl Ouimette, which concluded with Larin being taken down on the edge of the penalty area. Referee Hilario Grajeda opted to play on despite appeals from Orlando.

Wright-Phillips scored his second goal of the match and the season with a quarter hour remaining, giving the Red Bulls a 3-1 advantage.

Orlando City nearly worked their way back into the match in the dying minutes, when Ouimette registered an own goal that pulled the lead back to a single goal.

The Red Bulls found several quality chances to level the match at the end of the opening half, most notably when Grella’s acrobatic volley was punched away by Orlando goalkeeper Joe Bendik in the 45th minute. Wright-Phillips’ header moments later nearly found its way into the net, however, Larin was positioned perfectly on the goal line to make the clearance.

The Red Bulls will return to the field on April 29 against FC Dallas, while Orlando City travels to the New England Revolution the following night.

After a difficult start to the season, Bradley Wright-Phillips broke out for two goals against Orlando City. The striker had previously failed to score in the Red Bulls’ opening seven games.

Referee Hilario Grajeda’s no call in the 64th minute against Karl Ouimette proved to be costly for Orlando City. The Red Bulls centerback took down Cyle Larin on the edge of the penalty area on a breakaway attempt, however, Grajeda opted to continue play.

In addition to the Karl Ouimette‘s no-call in the second half, the Red Bulls defender struggled in several key situations against Orlando City. This was highlighted by his late own goal, which pulled the visitors to within one in the final 10 minutes.