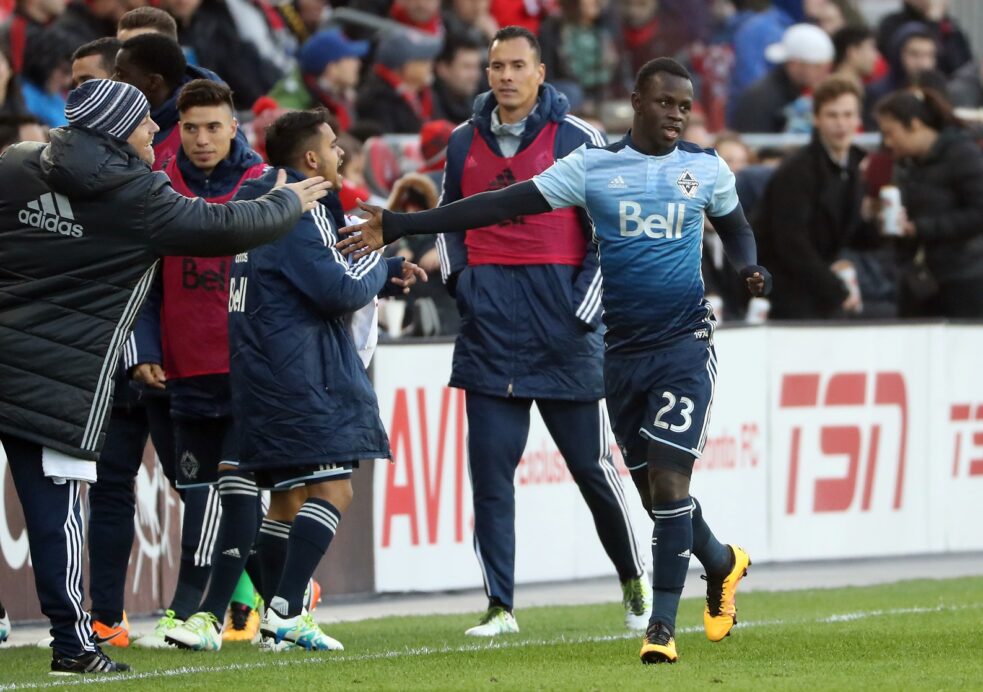 The Vancouver Whitecaps continued their hot streak on Saturday night at BMO Field, shunning a would-be comeback by their Canadian opponent.

Two consecutive victories had the Whitecaps rolling coming into the weekend, and Carl Robinson’s side kept their winning ways going with a thrilling 4-3 win against Toronto FC.

Sebastian Giovinco’s second-half brilliance was cancelled out by a pair of goals in a three-minute span by the Whitecaps. Kekuta Manneh and Pedro Morales scored in the 70th and 72nd minutes, respectively, giving the Whitecaps a two-goal lead.

Manneh broke the deadlock 12 minutes into the match, following a sloppy turnover in the defensive half by Toronto’s backline. Damien Perquis attempted a short pass to Jonathan Osorio, but it was off-target and allowed Manneh to make the scoreline 1-0.

It took just six minutes for the Whitecaps to double their lead, when Manneh was involved in the attack yet again for the away side. The 21-year-old attacker had his close-range attempt blocked by goalkeeper Clint Irwin, before Christian Bolanos followed up and calmly finished.

Toronto FC’s attack struggled to find opportunities early on but as the first-half wore on the home side built confidence. Jozy Altidore had a penalty kick saved by David Ousted in the 35th minute, but Sebastian Giovinco closed the deficit two minutes later.

The Italian striker gathered the ball in the penalty area, maneuvered the ball onto his left foot and managed to beat Ousted despite facing heavy pressure from the Whitecaps defense.

Altidore was forced out of the match in the 38th minute due to an apparent hamstring injury. The American has no goals this season in eight appearances for Toronto.

Giovinco scored his second goal of the night six minutes after the hour mark, after Michael Bradley’s timely interception led to a Toronto counterattack.

The home side made things interesting in the dying minutes when Drew Moor headed home a third goal for Toronto, but it wasn’t enough to complete the comeback.

Toronto will look to rebound on Wednesday night when they travel to the Bronx to face New York City FC, while the Whitecaps take on a Cascadia rival Portland Timbers next Sunday.

Kekuta Manneh looked vibrant all game, and his two goals and an assist proved that point. The midfielder’s 70th minute ankle-breaking cutback on Steven Beitashour set up his second goal of the night in spectacular fashion.

Damien Perquis and the Toronto backline looked disjointed more times than not on Saturday, especially when Manneh attacked down the left side.