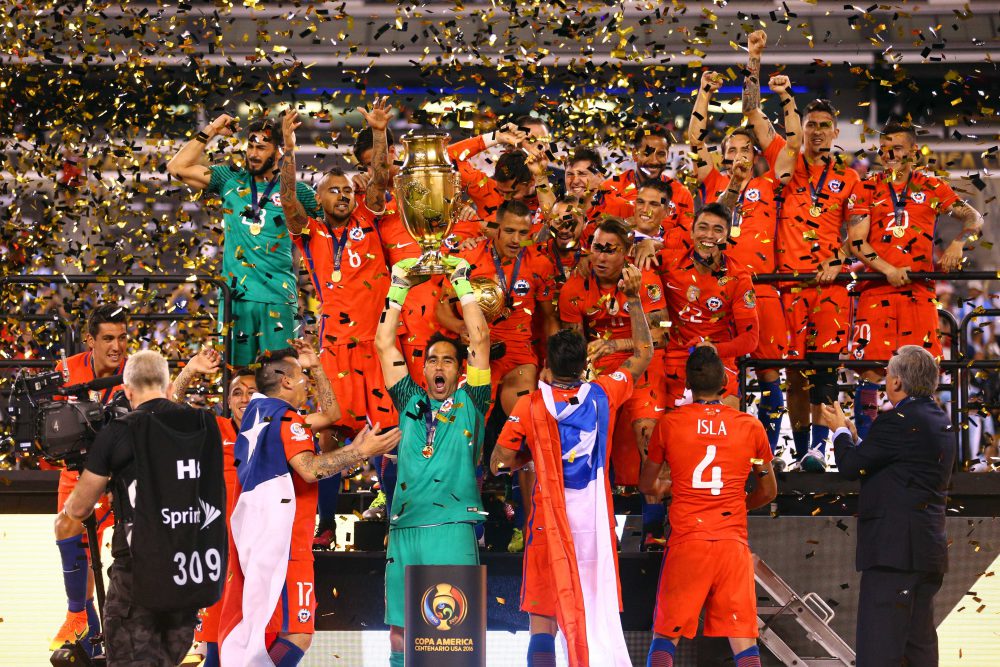 Chile defeated Argentina, 4-2, in penalty kicks after a scoreless 120 minutes in Sunday’s Copa America Centenario final at MetLife Stadium on Sunday night. The win gives Chile a second straight Copa America title after winning the 2015 edition of the competition, while leaving Argentina with a defeat in a tournament final for the third straight year.

Arturo Vidal was charged with taking the first penalty kick, but was undone by a diving Sergio Romero. Messi stepped up next, but skied his shot over the crossbar, leaving both sides scoreless through one round.

After exchanging a pair of converted chances and then taking a lead, Chile took the advantage in the fourth round when Lucas Biglia had his penalty kick saved by Claudio Bravo. With a chance to win the game, Francisco Silva buried his spot kick, sending Chile and portions of the record 82,026 fans into a frenzy.

Chile nearly struck in extra time, but was undone by a Romero save. After a miscue from the Argentina backline, Edson Puch lofted a pass to a wide open Eduardo Vargas, whose shot was collected by Romero.

The first half of regulation was defined by physicality, and the ensuing refereeing decisions from Brazilian Heber Lopes that left each team down a man.

Chile was the first side to see a player dismissed, as Marcelo Diaz received his marching orders for his second yellow card. After taking down Messi just moments before, Diaz toppled the Argentine star again in the 29th minute to get sent to the locker room for an early shower.

Just two minutes before halftime, play was leveled as Argentina were reduced to 10 players as well. After seeing Vidal hacked down just outside the box, Lopes issued a straight red to Marcus Rojo for the foul, which resulted in a wide open second half.

The best chance of the opening 45 minutes went to Gonzalo Higuain, who was given a chance to exorcize demons of finals past after missing good chances in both the championship games of the 2014 World Cup and 2015 Copa America. Alone on goal after pouncing on a poor touch from Gary Medel, Higuain hit a chip over Bravo that trickled just wide of the far post.

The second half saw both sides slow down a bit, as the wear and tear of 10-on-10 soccer dropped the intensity level slightly. Chile enjoyed a majority of the possession and the attacking play, and Vargas forced a save out of Romero in the 79th minute in Chile’s premier chance.

Just moments after Vargas’ chance, Sergio Aguero appeared destined for a title-winning moment, but fired his 85th-minute attempt off the frame.

Argentina was left to rue that miss, Messi’s failed penalty kick, and the multiple other chances it had as the South American powerhouse remains without a major title since 1993. Chile, meanwhile, now remains Copa America champion until at least 2019.