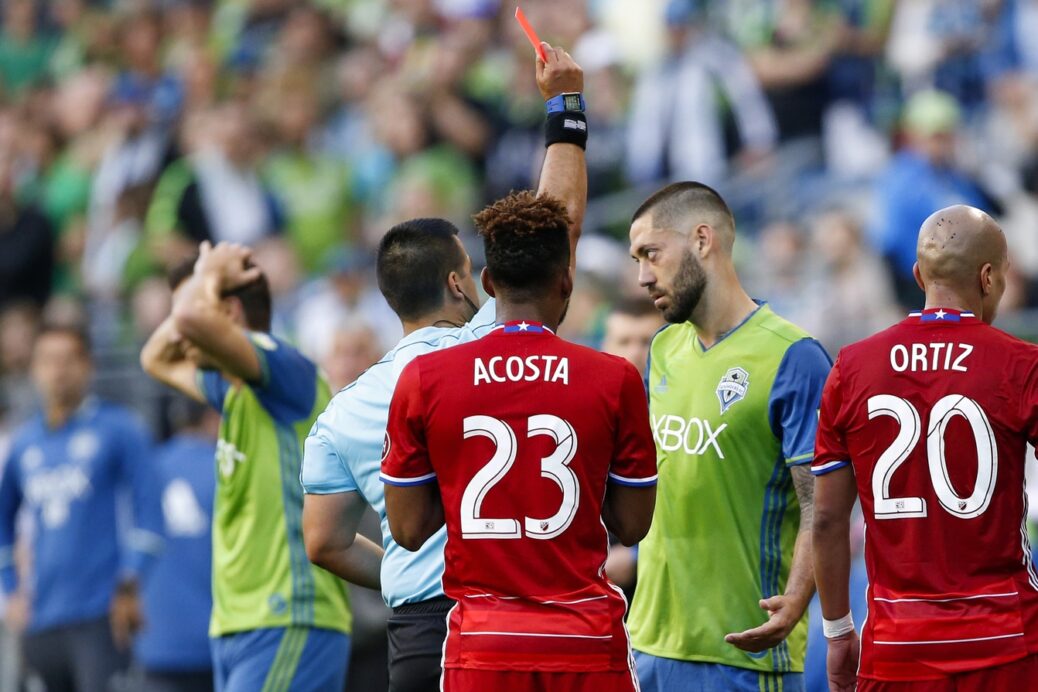 Clint Dempsey is a competitive guy, one who consistently brings a fiery personality to the field in every game he plays. Seattle Sounders head coach Sigi Schmid has seen that personality first-hand for nearly three years, and believes opposing teams are doing their best to take advantage of it.

Dempsey was issued a red card on Thursday night as the Sounders toppled FC Dallas, 5-0. After registering a goal and an assist, Dempsey was sent to the locker room for violent conduct, with referee Ricardo Salazar telling reporters after the match that Dempsey was sent off for striking an opponent in the face. Replays clearly show Dempsey lightly slapping FC Dallas’ Juan Esteban Ortiz in the back of the head just before Ortiz collapses while holding his face.

It wasn’t Dempsey’s first incident as a member of the Sounders. Last season, Dempsey earned a suspension for tearing a referee’s notebook in a U.S. Open Clash, but Wednesday’s dismissal was Dempsey’s first ever in MLS play.

While Schmid didn’t want to comment too much on the incident without seeing a replay, the Sounders boss said he believed Ortiz began the altercation with a hard elbow prior to Dempsey making contact with Ortiz.

“He competes,” Schmid said during his postgame press conference. “He’s also often times a target. I think people forget that the opponent sometimes target him so they put a little bit extra into it. I think the protection from the referees has to be there as well.”

Prior to the dismissal, Dempsey was having one of his best games of the season. After scoring the game’s opener via a penalty kick, Dempsey set up Jordan Morris for the game’s third goal, all but putting away a shorthanded FC Dallas team.

“He was good. We wanted him to play a little bit more on the left wing, push up there and stay wider,” Schmid said. “Obviously, he came through statistically very, very well. I thought he had a good game and had some good moments for us. His passing helped us today.”

The red card will now force the Sounders take on the Portland Timbers without one of their biggest stars. Barring a successful appeal, Dempsey will miss out on a major game just as the Sounders appeared to turn things around. Following Wednesday’s lopsided win, the Sounders sit ninth out West, six points behind the rival Timbers with two games in hand.

“We’re as well positioned as we can be. Obviously, we’d prefer to have Clint for that game because he’s a big-game player, and it’s a big game,” Schmid added. “I know he thrives on those situations, but we’re going to have to make do without him.”

What do you think of the Dempsey red card? How will the Sounders replace him against the Timbers?