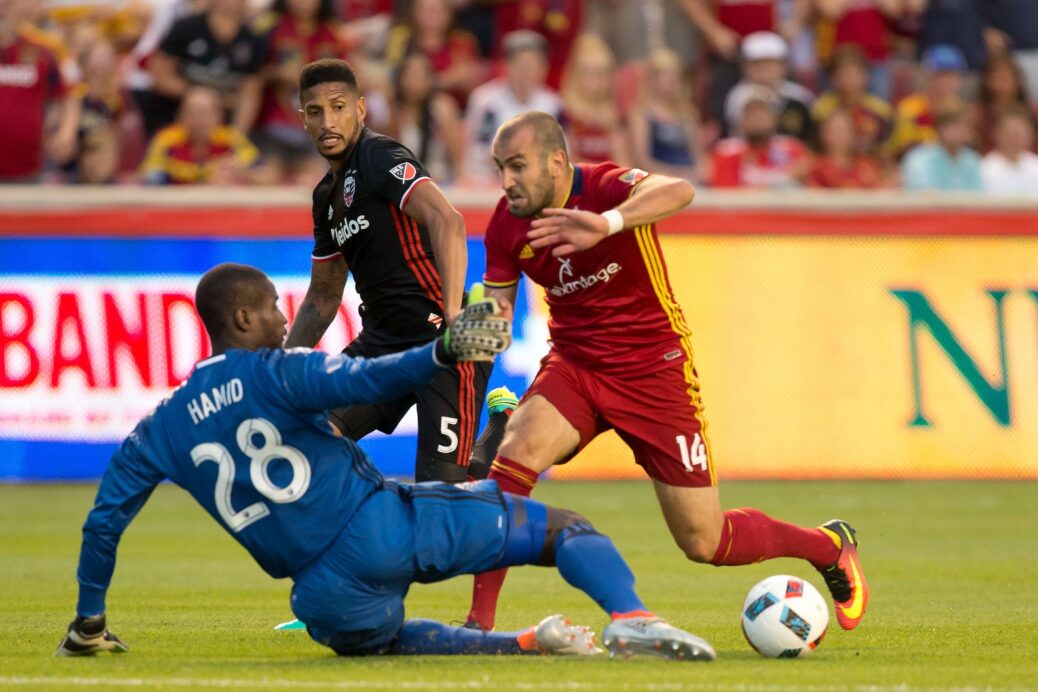 Jeffrey’s header in the 92nd minute handed the Black and Red an unexpected draw on a night where only goalkeeper Bill Hamid shined for Ben Olsen’s side.

Hamid was the star of the first half despite Real Salt Lake’s commanding presence on the ball. The United States international made four denials in the opening stanza, including a double save from close range on Yura Movsisyan in the 17th minute. The D.C. goalkeeper also tipped Luke Mulholland’s blistering shot from distance over the bar in the 39th minute to keep the match scoreless heading into the half.

D.C. only forced Nick Rimando into action on one occasion in the first half. Rimando made a diving save on Alvaro Saborio’s attempt from the left wing in the 10th minute. That would be the only significant chance created by the Black and Red in the first half.

RSL continued in the driver’s seat to start the second half and they finally found a breakthrough 12 minutes into the closing stanza through Juan Manuel Martinez.

Movsisyan held the ball up on the left wing to keep the attack alive before he knocked the ball onto the boot of Martinez. The Argentinian easily raced past a trio of D.C. defenders on his way to goal. When he reached shooting range, the 30-year-old delivered a delectable chip over the arms of a diving Hamid.

Minutes after Hamid made a one-on-one save against a breaking Olmes Garcia, Jeffrey took advantage of a set-piece opportunity and nodded the equalizer into an open left side of the net.

Both teams will be back in action on July 9. D.C. will visit the Philadelphia Union in an Eastern Conference showdown, while RSL will play host to the Montreal Impact.

Bill Hamid was immense throughout 90 minutes as he kept D.C. within striking distance. The U.S. international made a total of seven saves and he was only beaten on a moment of brilliance from Martinez.

Jeffrey’s 92nd-minute header stunned the RSL faithful inside Rio Tinto Stadium and many outside observers as well. Before the substitute’s goal, D.C.’s only shot on target came in the 10th minute.

The main reason D.C. was on the back foot for the majority of the match was the awful play of its back four. Bobby Boswell was especially poor in front of Hamid. He stood flatfooted as Martinez dashed past him on RSL’s goal.