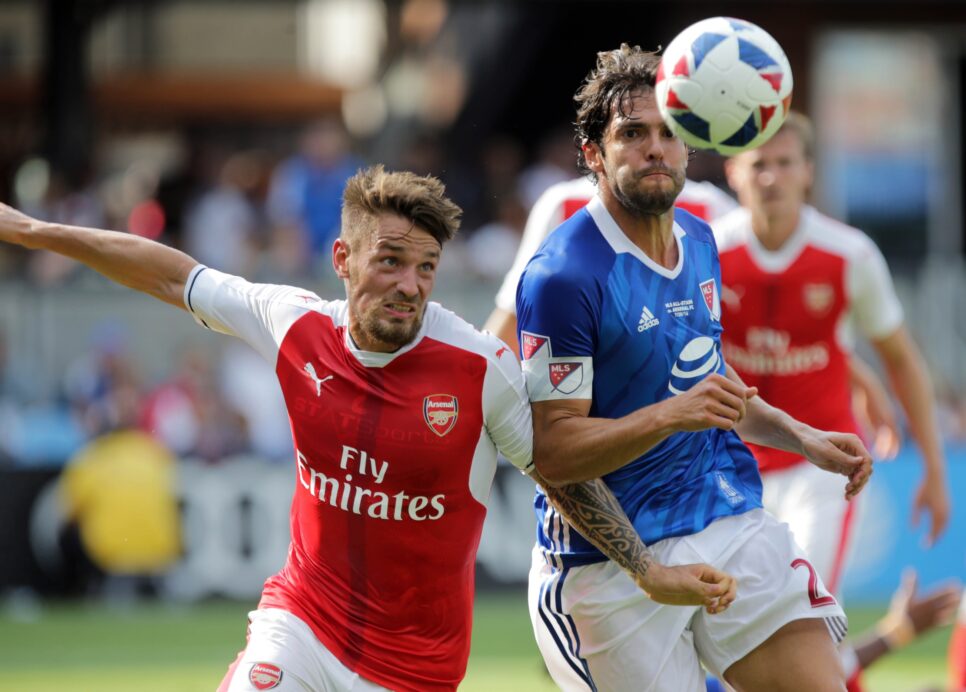 For the first time since 2013, the MLS All-Stars were defeated in the annual mid-summer showcase.

A late Chuba Akpom goal was enough to push Arsenal to a 2-1 victory in Thursday’s MLS All-Star game at Avaya Stadium. The loss is the All-Stars’ first since a 3-1 defeat to Roma in 2013, while the 2014 and 2015 matches provided wins over Bayern Munich and Tottenham, respectively.

Akpom’s winner came with just four minutes remaining, but the chance proved as simple as could be. As the MLS defense was opened up on the right side, Nacho Monreal slid a pass across the face of goal and into the path of Akpom, who was left with little more than a tap-in to seal Arsenal’s victory.

It took just 10 minutes for Arsenal to strike for the game’s opener, and it was a familiar face that did the damage. Following a ball over the top, Costa Rican star Joel Campbell was bumped down in the box following some miscommunication from the MLS defense. Campbell stepped to take the penalty kick he earned, slotting it into the right-hand corner to give the Gunners the early advantage.

That lead held until just before halftime when Didier Drogba punished Arsenal much like he had throughout his illustrious career with Chelsea. After seeing two initial shots blocked away inside the six-yard box, Drogba finally found the net with his third effort, besting former teammate Petr Cech and sending the two teams into the halftime break level at one apiece.

As both sides made wholesale changes heading into and throughout the second half, the most anticipated of those changes came in the 68th minute when Gedion Zelalem entered the match. The U.S. Under-23 Men’s National Team midfielder got on the ball several times throughout the match, keeping things simple as the game wore on.

The first half featured a frenetic pace, as both sides pushed the ball quickly up the field. For Arsenal, Theo Walcott prove dangerous, but a bit wasteful, while Alex Oxlade-Chamberlain created from range. On the MLS side, David Villa was an early standout before the NYCFC forward joined teammate Andrea Pirlo as an early substitution ahead of the team’s clash with the Colorado Rapids on Saturday. Joining Villa among the more active MLS stars was Giovani dos Santos, who provided one of the better looks in the eighth minute with a shot that forced a diving save from Cech.

Both sides slowed down a bit in the second half, with neither side generating as many chances as in the opening stanza. Clint Dempsey nearly squared Chris Wondolowski in the 74th minute for a decent late look, while David Bingham made a pair of diving stops throughout his 45 minutes of action. Playing in front of his home crowd, Wondolowski put a second chance just over the bar in the 82nd minute following an excellent run from Cyle Larin.

Moments later, it was Akpom’s turn to strike, leading Arsenal to victory.

In a match that featured few players on the field for extended minutes, it’s hard to standout, but Chuba Akpom did just that by firing Arsenal to a win with his late goal.

A late game-winner will always earn Moment of the Match honors, and Chuba Akpom’s finish moments before the final whistle proved just enough to push Arsenal to a 2-1 win.

It’s easy to excuse the MLS side given their lack of familiarity, but the Belgian pairing of Laurent Ciman and Jelle van Damme will be frustrated by the team miscommunication that led to Arsenal’s opener. It was the fault of the entire MLS defense, including goalkeeper Andre Blake, as a unit that had never played together very much looked the part.