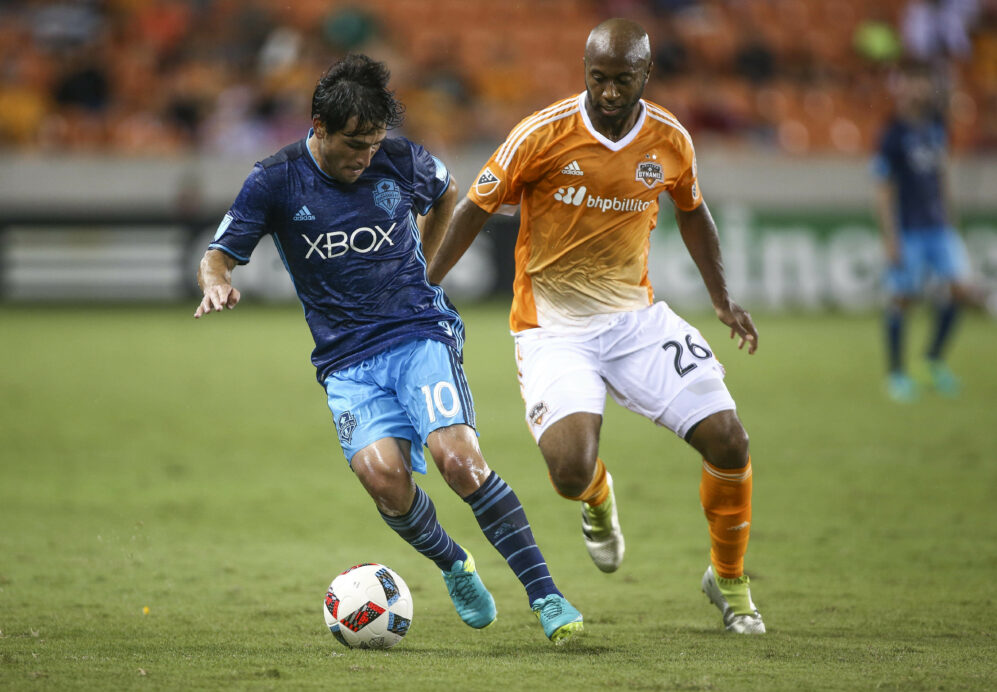 The Seattle Sounders found themselves down, but not out, at the BBVA Compass Stadium in Houston on Wednesday night.

Though the Sounders entered the match having won their last three matches, the visitors found themselves outplayed by the Houston Dynamo as the hosts statistically dominated. The visitors could get nothing going offensively nearly all match as the red-hot Clint Dempsey was rested by interim manager Brian Schmetzer for the midweek match.

It would come back to bite them as the Sounders looked lost without their star striker, only managing six shots, in stark contrast to the Dynamo who bombarded the visitors with 22 of their own.

Even so, it was the Sounders who had a chance to seize the lead first, as substitute Jordan Morris found himself one on one with Dynamo keeper Joe Willis, who came up huge to deny Morris on the doorstep.

The visitors would battle valiantly, blocking 10 shots, before Andrew Wenger struck in the second half. The breakthrough would come in the 75th minute as a series of botched clearances capped off by a Cristian Roldan turnover ultimately led to the Wenger goal, assisted by Ricardo Clark and Will Bruin.

It seemed as though all was lost and the Sounders win streak would come to an end, but Nicolas Lodeiro was having none of it. The Uruguayan found himself on the end of the final corner of the match, deep in the 94th minute, hammering home the equalizing goal from near the penalty spot to snatch a point from the Dynamo in heartbreaking fashion for the home crowd.

The last second goal sees the Sounders extend their unbeaten streak to five matches and leaves them one point out of playoff position with a match in hand over the Portland Timbers, who currently sit in the sixth and final position. They’ll face their Cascadia rivals this Sunday in Oregon in a massive contest.

The Dynamo remain in last place after their league-leading seventh draw at home this season. They welcome in-state rivals FC Dallas to town on Saturday.

Nicolas Lodeiro. It has to be the spectacular Uruguayan, who continued to impress in his time so far by sending every Dynamo fan disappointed.

It has to be Lodeiro’s 94th minute equalizer. The goal at the death maintains the Sounders 5 match unbeaten streak.

The Houston Dynamo defense. Bad enough to surrender a corner in the last minutes. Worse to leave Lodeiro with enough space in the box to get on the end of it to drive a dagger into the back of the net.