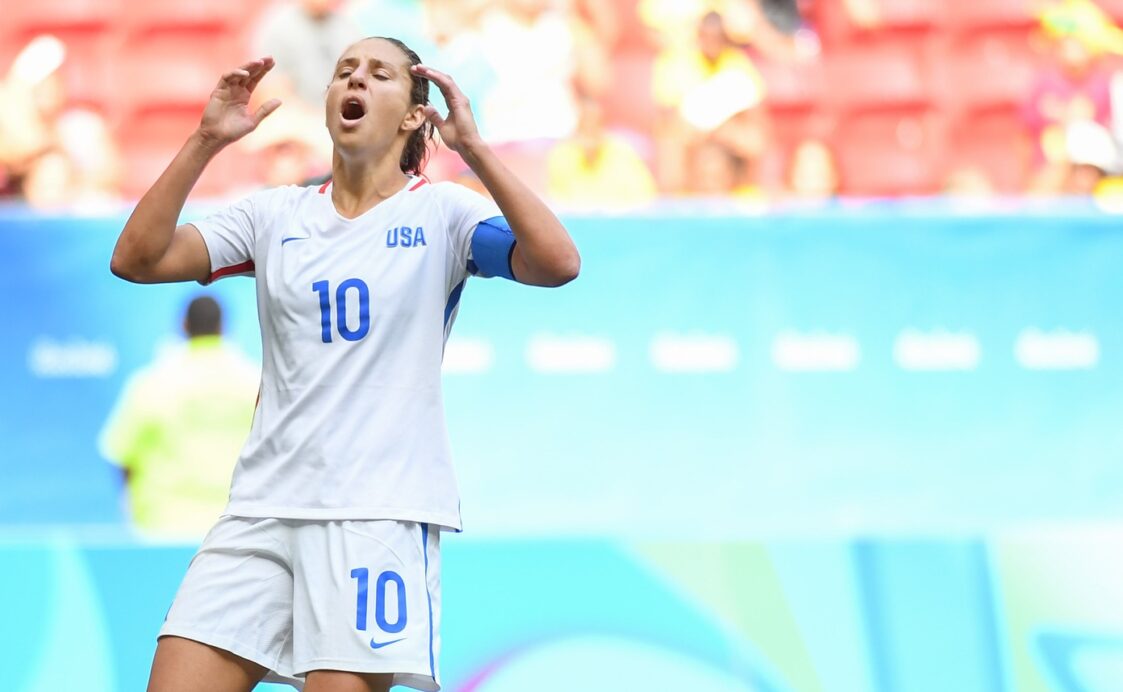 The U.S. Women’s National Team’s pursuit of a fourth-straight gold medal ended Friday in the cruelest of ways.

After 120 grueling minutes, Sweden defeated the USWNT, 4-3, on penalty kicks in Friday’s Olympic quarterfinal. Regular time ended in a 1-1 draw on goals from Stina Blackstenius and Alex Morgan, but the USWNT could not reach the gold medal game for the first time since the tournament’s inception.

Morgan’s initial penalty kick was saved before Sweden fired home their first two spot kicks. Lindsey Horan and Carli Lloyd kept the USWNT in the fight before Hope Solo parried away Sweden’s third shot from the spot to bring the U.S. level. The two teams exchanged finishes until the fifth spot kick, which Christen Press sent over the bar.  Lisa Dahlkvist buried Sweden’s fifth and final penalty kick, sending Pia Sundhage’s side through to the semifinal round.

The USWNT collapsed on a Sweden counterattack after nearly 60 minutes of domination to concede the game’s first goal. As pressure continued to mount, Sweden took their chance on the break as substitute Blackstenius broke loose. With Julie Johnston on her shoulder, the Sweden forward fired a shot past Solo for just her second career international goal.

After minutes of poking and prodding following Sweden’s opener, the USWNT finally found their break, and it was a fortunate one. Following a Sweden injury, a ball over the top deflected off of a defender and straight into the path of Morgan. As she cruised past a rattled Sweden defense, Morgan fired past Sweden goalkeeper Hedvig Lindahl to level the scoreline in the 78th minute.

In second half stoppage time, both sides scored goals just moments apart, but both saw the referee call the finishes back for offside. Lloyd started the drama with a 115th minute header into the back of the net, while Lotta Schelin’s finish on the other end less than a minute later was incorrectly ruled offside.

The USWNT were dominant throughout the first half, at least in possession. Despite having a majority of the ball and chances, the U.S. failed to generate a goal despite several solid opportunities to do so. In particular, Mallory Pugh and Alex Morgan combined wonderfully through the first 45, with the former showing the maturity to break down a stout Sweden defense. In total, the U.S. fired six shots, but forced just one save from two first half saves from Lindahl.

The second half was more of the same, until Sweden broke through with the game’s opener. As extra time continued, Sweden began to push more as tired legs took control of both sides. Still, no side could overcome the opposing defense, or the assistant referees, as two goals were wrongly ruled out.

In total, the USWNT outshot Sweden, 26-3, but could not emerge from penalty kicks.

Following the win, Sweden will take on the winner of Brazil’s match with Australia in Rio de Janeiro on Tuesday.