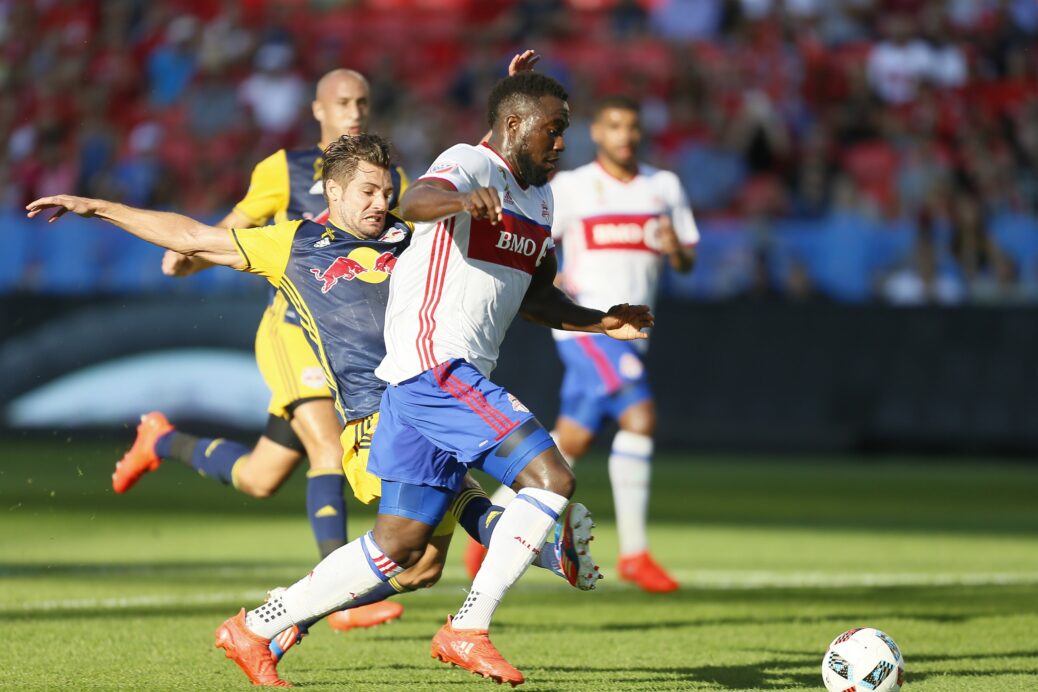 A former New York Red Bull led a second-half comeback as Toronto FC came back from 3-1 down to draw 3-3 with the Red Bulls on Sunday at BMO Field.

Jozy Altidore completed a brace to secure the draw for TFC (13-8-8), who extended its lead atop the Eastern Conference with 47 points. The Reds are also just five points adrift of FC Dallas in the Supporters’ Shield race with a game in hand.

As for the Red Bulls, they coughed up a two-goal advantage for the fifth straight time and remain in a tie for second place with New York City FC.

The match got off to a flyer after an own goal by TFC defender Steven Beitashour. Another lapse in concentration by Eriq Zavaleta gifted Bradley Wright-Phillips with New York’s second strike of the match on 31 minutes.

However, Michael Bradley, a former MetroStars player, cut Toronto’s deficit in half just 10 minutes later with his first goal of the season.

Just when it appeared as if the Red Bulls were going to let another advantage slip through their grasp, they capitalized on some lackadaisical defending from TFC. Sacha Kljestan picked out a wide-open Wright-Phillips, who made no mistake and buried his league-leading 20th goal of the campaign.

That strike made the English forward the first player in MLS history to record 20 or more goals in two seasons. Kljestan earned his league-leading 16th assist in the process.

With Toronto seemingly down and out with around 20 minutes remaining, Altidore took control. The American made it 3-2 off a beautiful free kick, leaving Luis Robles rooted to his spot. The 26-year-old scored his second of the day in the 86th minute with a tap in from inside the box, completing an improbable comeback.

Two strikers dominated the game, but Jozy Altidore should be commended for his resolute play. TFC was trailing 3-1 at home and the U.S. Men’s National Team forward delivered at a time when his team needed him the most.

When Bradley Wright-Phillips buried the Red Bulls’ third goal of the day, BMO Field was practically silent. Then Altidore reinvigorated the stadium with his beautifully taken free kick in the 68th minute. There was almost a sense that TFC was going to find an equalizer after that strike.

Neither defense was particularly impressive, but Eriq Zavaleta‘s performance was torrid from start to finish. Not only did his giveaway lead to the Red Bulls’ second goal, he gave Wright-Phillips too much space on several occasions and appeared lost whenever a cross came into the box.