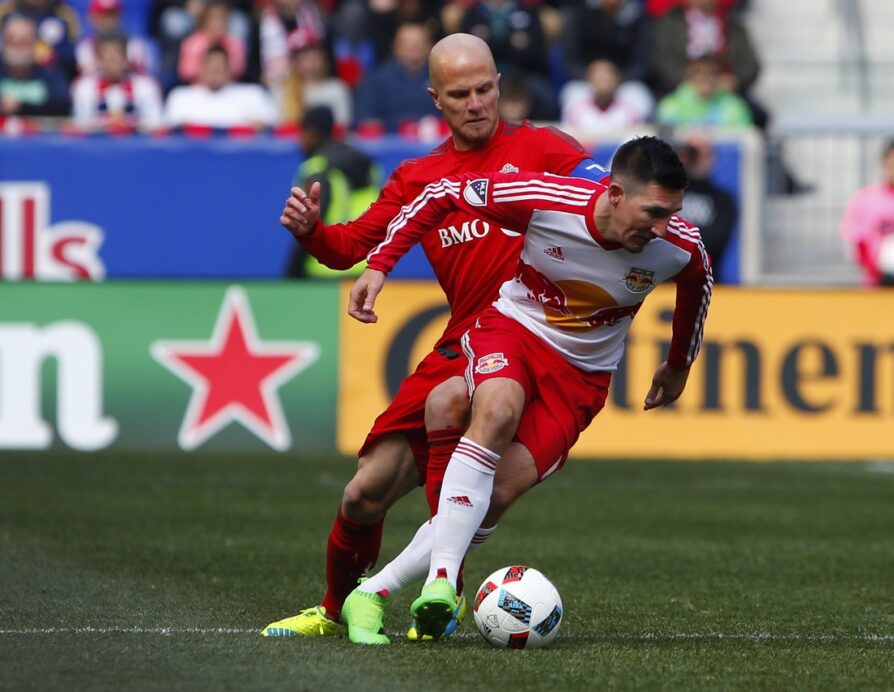 With only five weeks left in the MLS regular season, the race to the playoffs is heating up.

A battle between first and second place in the Eastern Conference highlights the action this weekend, with Toronto FC hosting the New York Red Bulls on Sunday. Both sides are separated by just two points, with New York City FC breathing down their throats as well.

Speaking of NYCFC, David Villa and co. face the newly crowned U.S. Open Cup champion FC Dallas at Yankee Stadium on Saturday. FC Dallas has a four-point lead over the LA Galaxy for first in the Western Conference and the Supporters’ Shield standings. NYCFC , meanwhile, will try to keep pace with TFC and the Red Bulls.

The Cascadia Cup returns as the Seattle Sounders welcome the Vancouver Whitecaps to town. The loser of this match would likely drift out of the playoff race, especially the Sounders as they are already six points adrift of the postseason.

Other crucial matches include the Open Cup finalists New England Revolution and slumping Montreal Impact, along with Sporting Kansas City facing the Galaxy on Sunday afternoon.

Here is a closer look at the action in Week 30:

The opening match of the weekend is a crucial one for D.C. United.

Fresh off a 2-2 draw with the New York Red Bulls, D.C. is one point adrift of a playoff spot with six games remaining. It has a tremendous opportunity to move above the red line against the Chicago Fire, where crushed, 6-2, by United on Aug. 27. The Black and Red are unbeaten in their last eight matches, but will have to cope without defender Sean Franklin and midfielder Jarred Jeffrey, who are both injured.

The Seattle Sounders and Vancouver Whitecaps square off in the afternoon to kick off the action on Saturday. The road team has won the last five matches between the two clubs, with the away side outscoring the hosts 11-1 in that span. This should favor the Whitecaps, but apart from last weekend, they have struggled to score. The Sounders, meanwhile, are looking to snap a three-game winless skid to move closer to the red line. Clint Dempsey remains unavailable due to his heart issue, while Kekuta Manneh is still dealing with his foot injury.

The Portland Timbers are being chased by their Cascadia Cup rivals for the final playoff spot in the Western Conference and have an opportunity to widen the gap.

The Timbers welcome the Philadelphia Union to Providence Park on Saturday. Portland has traditionally finished the regular season on a high note, and will be hoping it repeats that trend this year. The Union have been relatively solid the past few weeks, although they’ve failed to win their last two games. It won’t be any easier in a building where their opposition has a 10-3-2 record. Injuries to Brian Carroll and Ken Tribbett are Philadelphia’s only concerns, while Nat Borchers is Portland’s only major absentee.

The U.S. Open Cup champion will try to add to its perfect week with a victory in the Bronx.

FC Dallas will face New York City FC just four days after winning their first trophy in 19 years. NYCFC has won five straight home games, and with Dallas traveling on short rest, Patrick Vieira’s side will have a distinct advantage. Both teams don’t have any key injuries, so Oscar Pareja could rotate his starting XI, but with a narrow lead in the Western Conference, he may not have much of a choice.

Orlando City is clinging to the sixth and final postseason berth in the Eastern Conference, but can create a bit of room with a win over the Columbus Crew.

The Lions have picked up 11 out of a possible 24 points under Jason Kreis. However, Orlando City appears to be gaining an identity as the weeks go by. The 4-2 loss to the LA Galaxy was a tough result to take, but a 4-1 victory at the Montreal Impact showed how exciting Kreis’ team can be. Orlando has a great opportunity to rebound from the defeat to the Galaxy, as the Crew are winless in three of their previous four matches.

The Montreal Impact and New England Revolution are in desperate need of a victory on Saturday.

The Impact have won just one of their last six games, while the Revolution are coming off a 4-2 loss to FC Dallas in the U.S. Open Cup final. However, both teams have in-form strikers. Juan Agudelo has now scored four goals in his last three starts in all competitions for the Revs. Montreal’s Matteo Mancosu has been involved in six goals over 10 appearances, but he’s been sharing time with Didier Drogba. With the Canadian side five points above the Revolution, this adds even more intrigue to the match at Stade Saputo.

The Colorado Rapids are in the thick of a Supporters’ Shield race, while the San Jose Earthquakes are fighting for their playoff lives.

The Rapids, who are unbeaten at home, will host the Earthquakes on Saturday night. San Jose has earned just one road victory in 2016 and are dealing with significant injuries. Four starters are hurt, including Clarence Goodson and Quincy Amarikwa. However, Colorado is missing Jermaine Jones, Sean St. Ledger and Kevin Doyle. Now is as good of a time as any for the Quakes to force an upset.

Saturday’s round of games finishes in Utah as Real Salt Lake faces the lowly Houston Dynamo.

RSL has not won in September, but its 3-3 draw with the LA Galaxy demonstrated the team’s tremendous spirit to come back and earn a point. However, with the Dynamo coming to town, the Claret and Cobalt have to take advantage. Houston has only earned one road victory and the hosts have a chance to pass the Galaxy and the Colorado Rapids in the Western Conference standings.

Both teams are experiencing contrasting runs of form. As usual, the Galaxy are heating up down the stretch, while Sporting KC is dwindling. LA is unbeaten in five straight games and are four points behind FC Dallas for the Supporters’ Shield. SKC has accumulated just one win over their previous five MLS matches. Sporting still has a four-point cushion in sixth place, but that could quickly disappear if this disappointing run continues.

The week finishes at BMO Field as Toronto FC and the New York Red Bulls square off in a matchup of first versus second in the Eastern Conference.

Toronto FC has been in top form over the past two months, going unbeaten in eight of their last nine games. The Red Bulls haven’t lost since their loss in the Hudson River derby on July 3, but conceding a 2-0 lead to D.C. United last week definitely hurt. In fact, New York’s road form has been abysmal, earning just two victories this season. It has also struggled in the second half of matches. However, the absence of Sebastian Giovinco will definitely help the visitors’ chances.