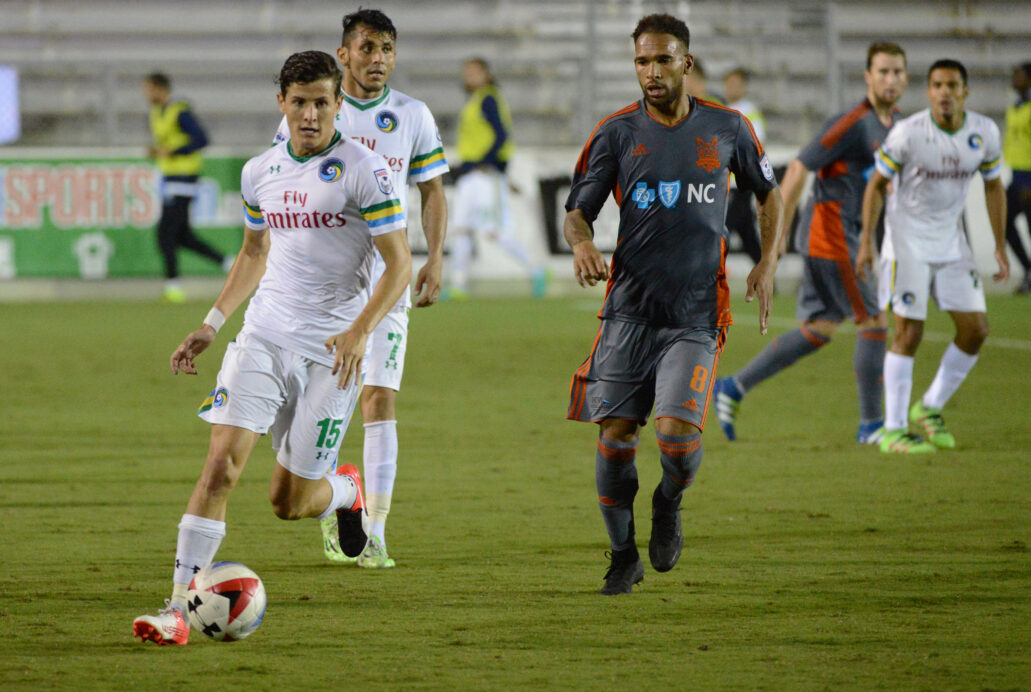 As the NASL playoff race began to heat up, so have some of the matches. In a midweek treat of four Wednesday night matches, Miami FC and the New York Cosmos got crucial victories, as the former remains the league leaders in both the Fall and Combined standings.

Elsewhere new streaks were broken while other record were shattered, including a certain goalkeeper tying the NASL record of shoutouts in a season.

Here is a look at Wednesday night’s action:

Despite playing very well in the first half, the Carolina RailHawks failed to capitalize on early chances and it came back to bite them.

The New York Cosmos scored twice in a minute in the second half to beat the RailHawks, 2-0, at WakeMed Soccer Park. After getting their first from Adam Moffat at the penalty spot in the 71st minute, the Cosmos retook the ball at the match restart and broke the other way to double their lead through Ruben Bover.

The loss ends Carolina’s nine-match unbeaten streak at home, while the Cosmos continue atop the Fall Season and Combined standings.

After a sad and somber scene pregame, where Miami FC hosted a pregame tribute to honor the late Miami Marlins pitcher Jose Fernandez, Miami was able to secure three important points at home against the Ottawa Fury.

Despite going up a goal through Michael Lahoud in the 35th minute, Miami would concede the tying Giuseppe Gentile goal to the Fury on the stroke of halftime. Enzo Rennella played hero for Miami deep into second half stoppage time when he headed home a Freeman cross, giving the hosts a late 2-1 lead.

The victory puts Miami one point behind fourth place Minnesota United in the Combined standings, while the win also broke Miami’s two -match losing streak. For Ottawa, the loss at Ocean Bank Field at FIU ended a seven-game unbeaten streak.

Jacksonville Armada FC extended their home unbeaten streak to five matches with a 0-0 draw with FC Edmonton at home on Wednesday night.

Despite the Eddies being winless in their last seven, that has not stopped one particular FC Edmonton player from the record books. Goalkeeper Matt VanOekel tied an NASL record with his 14th clean sheet of the year in the 0-0 draw at Jacksonville. Despite that ugly 0-5-2 record in their last seven matches, the Eddies are in a second-place tie with Indy Eleven in the Fall Season standings.

Puerto Rico FC came back from an early deficit to defeat the Fort Lauderdale Strikes, 2-1, at Juan Ramón Loubriel Stadium.

Fort Lauderdale struck first through an Amauri goal in the first forty-five, but the hosts were able to draw even before the halftime whistle thanks to a finish from Tyler Rudy.

Puerto Rico brought on Bljedi Bardic, who was able to leave a mark on only his second appearance for the club when he gave the hosts the lead in the second half. Both the Strikers and Puerto Rico are tied for 10th place in the Fall Season standings.