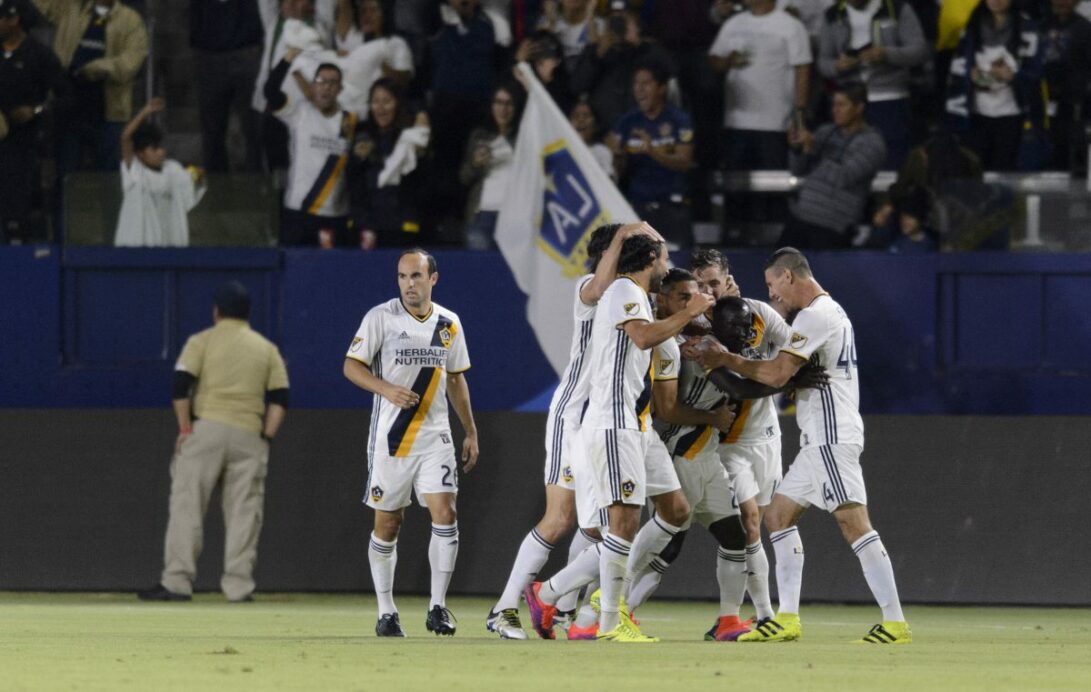 Carson, Calif. – Two teams entered the match struggling on form. One team left looking like potential champions, while the other left for the winter.

The LA Galaxy lit up Nick Rimando and Real Salt Lake with three first-half goals, and went on the eliminate their Western Conference rival, 3-1, in the knockout round of the MLS playoffs, before 18,124 fans on a cool night in Los Angeles.

Emmanuel Boateng scored twice in the space of ten minutes with two attractive goals to lead the Galaxy. His first, the game winner, came when he took advantage of his diminutive stature to squirt through the two RSL centerbacks to find himself alone in on goal, where he poked home past a sprawling Nick Rimando with the outside of his left foot.

Boateng’s second tally was just as pretty, placing a low left-footed strike into the far side netting from a tight angle to the right side of goal after beating his man around the edge.

Veteran Alan Gordon, who has started six of the last eight Galaxy matches due to a rash of injuries, opened the scoring when he ran onto a ball inside the the six-yard box to punch home a Giovani dos Santos flick-on header off a Landon Donovan cross.

Galaxy dominated play – and possession – throughout the first half, but RSL managed to draw themselves back level in the 24th minute when Javier Morales went down in the penalty area and drew a call – much to the ire of the Galaxy players and spectators. Joao Plata converted from the spot, and despite being on the back foot, the Claret and Cobalt found themselves in the match after half an hour.

Their hopes were dashed shortly after, when Boateng began to turn on the after burners and flash the vaunted foot speed that earned him Gatorade High School Player of the Year honors only four years ago.

Like so many meetings in the past, the game became a chippy affair towards the end, as RSL pressed forward seeking goals and were forced to resort to chopping down Galaxy players when they attempted to break out on the counter.

RSL’s season comes to an end with a hardly inspiring 12-13-10 record. It will spend the offseason no doubt looking to rebuild the back line, while trying to add a consistent scorer to partner up with Plata.

The Galaxy, meanwhile, will now face the Colorado Rapids in a two-legged series beginning this Sunday at the StubHub Center. The real test starts now for LA. It has the highest payroll in the league, but many of its star players – most notably Steven Gerrard, who sat on the bench tonight in street clothes – have been out with injuries.

The diminutive Emmanuel Boateng, all 5 ft 2 inches of him, stood tall on this night, scoring two pretty goals and generally making mince-meat of the right side of the RSL defense. The 22 year old has shown flashes of brilliance throughout his rookie season with the Galaxy, but this was certainly his best game yet as a pro.

Javier Morales‘ dubious penalty, and Joao Plata‘s conversion from the spot, drew RSL back level in match in which they’d barely even touched the ball. The goal not only succeeded in leveling the score, but took the air out of a boisterous home crowd.

But only for a few minutes. Boateng’s first goal, coming only seven minutes after RSL’s penalty strike, gave the Galaxy back the momentum in the match, ignited the crowd, and gave the Galaxy the lead for good.

Real Salt Lake has struggled defensively all season, and tonight was no different. Demar Phillips was repeatedly punished by Boateng’s speed. Phillips drew one yellow card when he chopped down Boateng from behind in the 40th minute, and could have easily drawn another in the 53rd when he resorted to reaching out and punching Boateng in the chest as the Ghanaiian blew by him for the umpteenth time on the evening.  Not pretty.