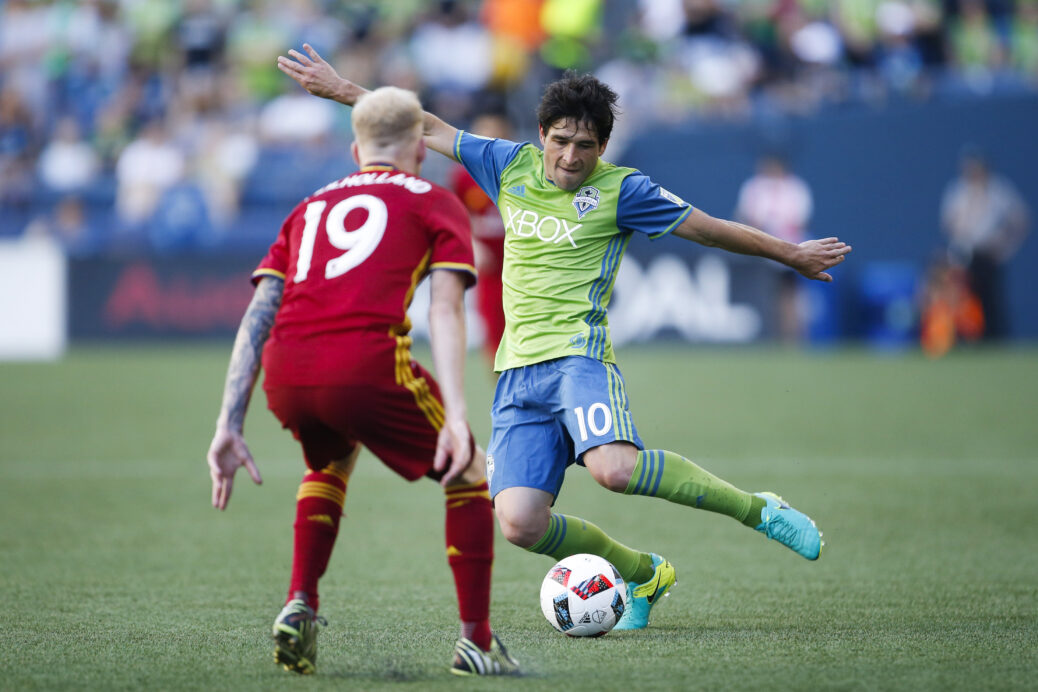 Decision Day in Major League Soccer is finally here, and it promises to be even more exciting than last year.

The Western Conference will be especially hectic as four teams vie for three playoff spots. The Seattle Sounders will try to solidify a berth and a home playoff game against Real Salt Lake, which is one point above the Sounders entering Sunday’s clash.

The two other teams chasing Seattle and RSL are the Portland Timbers and Sporting Kansas City. The Portland Timbers will be on the road versus the Vancouver Whitecaps as they battle for the Cascadia Cup and their playoff lives. Meanwhile, SKC hosts the San Jose Earthquakes in a must-win game for Peter Vermes’ side.

As for the Supporters’ Shield race, the Colorado Rapids welcome the lowly Houston Dynamo to Dick’s Sporting Goods Park. Two points separates the Rapids and FC Dallas, which faces a stiff test at the LA Galaxy to close out its regular season.

The New York Red Bulls have virtually clinched the Eastern Conference’s top seed, but New York City FC and Toronto FC will be dueling for a first-round bye this Sunday. NYCFC hosts the Columbus Crew and TFC will play the Chicago Fire at BMO Field. One point separates the two teams, so a New York City win guarantees a direct entry to the conference semifinals.

The Philadelphia Union would need a twelve-goal swing to go against them in order to fall behind the New England Revolution. However, avoiding a loss against the Red Bulls would officially book their spot in the postseason.

Here is a closer look at every game on Decision Day.

The Colorado Rapids will need some help from the LA Galaxy to clinch the Supporters’ Shield this Sunday.

The Rapids face the lowly Houston Dynamo at Dick’s Sporting Goods Park, where they are undefeated this season. Given Houston’s 2-9-5 record, Colorado should be a heavy favorite. The hosts recently had their six-game unbeaten streak snapped by the Portland Timbers, but a result is almost a given. Even if Pablo Mastroeni’s side misses out on the Shield, he will be boosted by the imminent return of Jermaine Jones for the postseason.

Sporting Kansas City is one of four teams who will be fighting for its playoff life on Sunday.

Sporting hosts the San Jose Earthquakes, who have already been eliminated. The Quakes are 1-8-7 on the road and are missing several starters. Anibal Godoy is suspended, while Quincy Amarikwa, Marc Pelosi and Clarence Goodson are all out for the season. However, SKC has four injured players in Justin Mapp, Chance Myers, Brad Davis and Lawrence Olum.

FC Dallas can win the Supporters’ Shield against the LA Galaxy at the StubHub Center, but it won’t be easy. FC Dallas recently lost playmaker Mauro Diaz to an Achilles injury and Fabian Castillo left for Turkey earlier this season.

The Hoops have also lost five times on the road. They may claim the Shield, but whether they can cope without Diaz in the playoffs remains to be seen. Thursday’s CONCACAF Champions League win in Guatemala could result in some tired legs for some FC Dallas players.

The New England Revolution have a slim chance at making the playoffs, but the Montreal Impact could potentially clinch a home playoff game.

An Impact win over the Revolution and a D.C. United loss would see the Canadian side move up to fourth place. However, Montreal could slip to sixth place in the Eastern Conference with a defeat and a Philadelphia Union victory. Given what has transpired with Didier Drogba recently, it looks like Matteo Mancosu will start up front when he’s available. Whoever is leading the attack, it will be intriguing to see if the Drogba controversy proves to be a distraction ahead of the playoffs.

New York City FC is in the playoffs. When the team begins its postseason is not yet determined.

NYCFC has a one-point advantage over Toronto FC for second place. It would take a miracle to leap past the New York Red Bulls, but a win or TFC loss would secure a first-round bye for Patrick Vieira’s side, which would be massive for the team’s confidence. Ronald Matarrita is questionable and Frank Lampard is still injured, but otherwise, the hosts will be at full strength.

D.C. United is on a roll and its form could lead to a home playoff game.

A win over Orlando City will guarantee a knockout-round match at RFK Stadium for D.C., who would face either the Montreal Impact or Philadelphia Union. However, a draw or loss combined with an Impact victory would have United on the road to Montreal. Marcelo Sarvas and Sean Franklin returned to full training recently and could feature this Sunday, but either way, those would be significant boosts for the team in the postseason.

The New York Red Bulls have virtually clinched the top seed in the Eastern Conference, while the Philadelphia Union are basically in the playoffs.

A massive swing in goal difference would have to go against these teams if one of them loses. Otherwise, a draw would be enough to secure their current fates. Gideon Baah and Connor Lade are both out for the season, while Daniel Royer could miss the regular-season finale for the Red Bulls. Union defender Josh Yaro is still battling a concussion and Warren Creavalle has a rib problem, but both players are listed as questionable.

In terms of playoff implications, this is the marquee match on Decision Day.

A win for the Seattle Sounders would see them leap past Real Salt Lake for third place in the Western Conference. If RSL drops points, it could slip out of a playoff spot if the Portland Timbers and Sporting Kansas City are victorious as well. Injuries to Aaron Maund and Yura Movsisyan would be massive blows to the visitors’ chances, too. Andreas Ivanschitz is doubtful and Brad Evans is questionable for the Sounders.

Toronto FC has a shot at clinching a first-round bye, but it will also need help from the Columbus Crew.

TFC needs to beat the Chicago Fire at BMO Field and hope that the Crew can get a result at Yankee Stadium in order to move up to second place in the Eastern Conference. Toronto has won its last three games against Chicago, but each match has been decided by one goal. Luis Solignac is suspended for the Fire and Will Johnson is still dealing with his knee injury.

The Cascadia Cup and a playoff spot are on the line at B.C. Place.

The Portland Timbers need to beat the Vancouver Whitecaps to make the postseason, but the hosts will be out for revenge. The Timbers dominated the Whitecaps in Vancouver during the playoffs last year, so the Canadian club will want to avenge that elimination by ending the MLS Cup champions’ season. Portland will be missing Liam Ridgewell and Diego Chara, who are both suspended. Those two absentees could be the visitors’ undoing on Sunday.