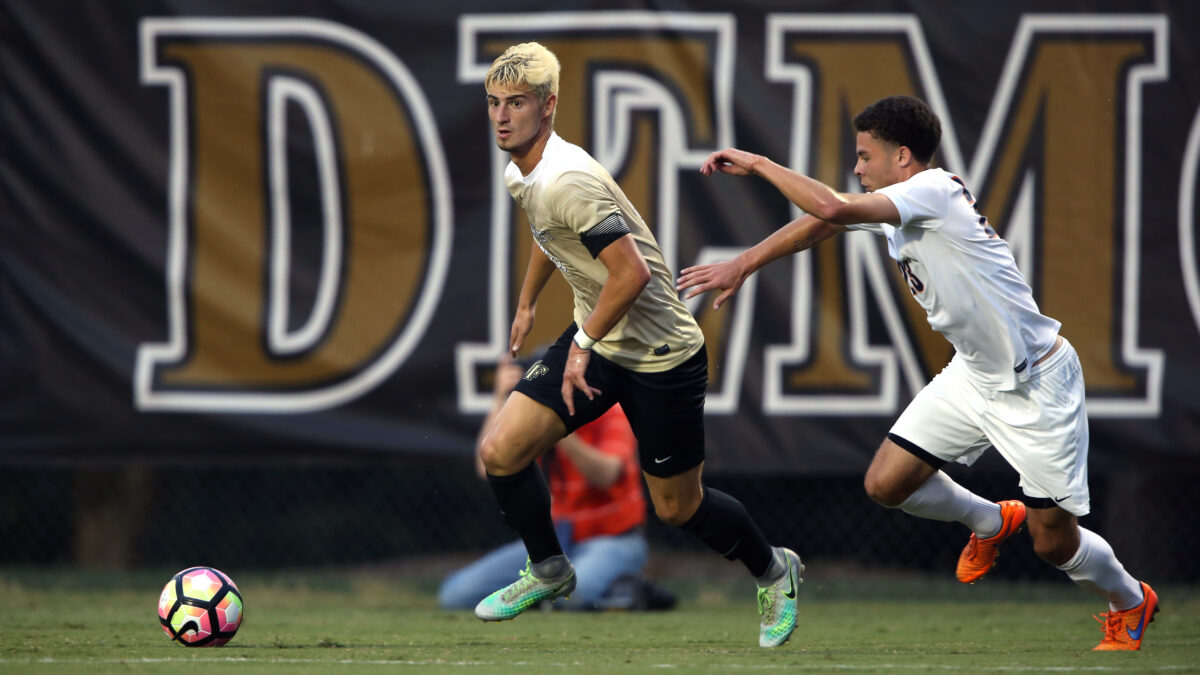 Ian Harkes, understandably, only remembers bits and pieces. He remembers a match against Tottenham, several with the Columbus Crew. He’s seen highlights, read stories and certainly heard countless tales, but Harkes was just a bit too young to fully grasp what he was watching as his father forged his legacy as a captain for both club and country.

Now, 13 years after his father ended his professional career, Harkes is preparing for the start of his own and, with it, the beginning of his own story.

Harkes, the son of MLS and U.S. Men’s National Team legend, John, is in the midst of his senior season at Wake Forest. Widely projected as one of the top midfield prospects in the college game, Harkes is seen as a player bound for January’s MLS Draft, unless a potential Homegrown claim from D.C. United pulls through.

When the time does come and he does step onto the field as a professional, Harkes won’t feel any added weight or expectation. Rather, he’s simply excited about the opportunity to continue to play the game on his own terms.

“I’ve gotten questions about it my whole life,” Harkes told SBI. “I see it as a good pressure. I don’t see it as an anxiety-inducing factor in my life that I have to live up to any expectations… I realized that I’m a different player. It’s never been about making my own name or living up to my name. I just try and play my own game and play in the best way possible. Having (my father’s) guidance, and my whole family being soccer-oriented, it’s a huge help. I just try and enjoy the game while finding out what kind of player I am going to be.

“It’s been my dream to play at the next level, the professional level,” he added. “It’s always been in the back of my mind. My college career is helping me get there. I’m focusing on Wake and what we can do this season, but I also think about the future and what’s out there. I’d be really lucky to have an opportunity to continue playing, so I’m hoping for the best.”

Harkes’ soccer education has been a unique one. The now-21-year-old midfielder was born in England, but spent only a year abroad before his father’s career took him to MLS. The Harkes family settled in Fairfax, VA., where they’ve essentially remained since. Harkes spent summers following his dad’s post-D.C. United career with the Crew and New England Revolution, but kept his Virginia ties throughout childhood.

As a kid, Harkes was immediately enamored by a game that he was seemingly born to play. While his father racked up accolades for both club and country, Harkes’ mother, Cindi, played for the Maryland Pride of the now-defunct W-League while also featuring for Sheffield Wednesday Ladies and Stanton Rangers overseas. At the age of three, Harkes was kicking a ball with his parents, learning to play a game that was always somewhat natural. He gave other sports a shot, but basketball and rugby never quite held his attention quite like soccer.

“When you look back and see different highlights and different goals, you see that crazy goal, highlights of him on the national team, it’s amazing to see,” Harkes said, now fully aware of his father’s achievements. “You don’t understand it until you’re older and look back and see just how good he was. For me, he’s just my dad, but he was a really good player and someone you want to look up to. You don’t get it when you’re younger, and I don’t remember certain games, but looking back, it was all pretty special.”

Following a standout high school career, Harkes had college options. Both of Harkes’ parents had forged their reputations at the University of Virginia, but Wake Forest seemed the more natural fit. The decision was made and, with his parents’ best wishes, Harkes joined Wake as a freshman in 2013.

Through his first three college seasons, Harkes appeared in 59 games, all of them starts. He was named captain heading into his junior year before turning in a campaign that saw Harkes named to the All-ACC First Team with a goal and four assists. Now 16 games into his senior season, Harkes hasn’t slowed down, providing three goals and two assists for a team that sits third in the latest SBI College Soccer Top 25.

Wake Forest head coach Bobby Muus says that Harkes isn’t a player that will light up the stat-sheet. Unless you watch him play, you’ll never fully understand what Harkes does for the Demon Deacons, and that’s part of what Muus thinks makes him so special.

“There are things that separate him from most of the players in college soccer,” Muus told SBI. “A bunch of guys say that want to achieve this goal, and only check a few of the boxes. Ian does his best to check all of the boxes. In terms of the pressure, he’s his own person. He has a big name following him, but I would think John and Cindi are extremely proud of the young player they’ve raised and the young player he has turned into.

“He’s ready,” Muus added. “I told him that I think there are times where, and I don’t think he thinks this, but I think the college game, at times, bores him. I think he’s capable of more. He’s excited, and I’m excited, at seeing him make that adjustment and how he does make that jump.”

According to Muus, Harkes’ impact is felt away from the field just as much as on it. As he drives in to campus in the morning, Muus says he’ll see Harkes on the field, working on his finishing. Harkes makes a point to sit with a different teammate every day, Muus says, as he looks to talk soccer and life with anyone else ready to listen.

Yet, Harkes is the first to admit he’s not a finished product. Like his father, Harkes yearns to be an engine, a go-to player that can take charge of any midfield. But, unlike his father in some ways, Harkes remains a bit tentative on the attacking end. He continues to work on beating players off the dribble and getting into the final third as he looks to transition into a more set role as a box-to-box midfielder.

MLS is the aim, Harkes says. After playing several seasons with the club as a youth player, D.C. United remains an option, although a Homegrown claim is not yet certain. Harkes says they are “definitely looking into it” and that there is interest, even if he hasn’t been with the club since before his 18th birthday.

There’s also another unique opportunity that Harkes has mulled over. John Harkes currently leads the USL’s FC Cincinatti, a club that continues to make waves as one of the best attended in the U.S. However, Harkes’ sights remain fixed on a start separate from his father’s current squad.

“You can’t rule out any options, but I want to, if not MLS, try and look at something overseas,” Harkes said. “It’s tough, and the right opportunities need to be there at the right time. I’m just trying to take it one step at a time and see what opportunities present itself.

“Hopefully I do get an opportunity. I don’t want to close up any options. My dad coaches now and he was coaching me a lot when I was younger, so it would be interesting, but I don’t know if I’d like to go that route. I would like to shoot for MLS or overseas.”

For now, though, Harkes remains focused on Wake. After making it to the quarterfinals of the NCAA tournament last season, Harkes says the Demon Deacons believe they can make a run at a national title. There are expectations to live up to, Harkes says, as his team looks to justify the high ranking they’ve held onto throughout the better part of the past two seasons.

While the door is not yet shut on Harkes’ college career, Muus does see a bright future ahead. Harkes is bound for the professional level in the very near future, giving the 21-year-old midfielder another opportunity to forge a career his way.

“It’s not fair to a kid to tag him and say he’ll make it seamlessly, but his mentality is part of that,” Muus said. “He’s had a pro mentality since the day I met him. He doesn’t talk about it; he does it. The way I look at these guys, the way they handle themselves on and off the field, it’s going to go well for him and how players do at the next level.

“He will rise to that level and that occasion. He’s a lot better in a lot of aspects of his game, but he’s a little bit better than these guys that will be in preseason or signing contracts. As long as he keeps the mentality he has, the sky is the limit for him.”