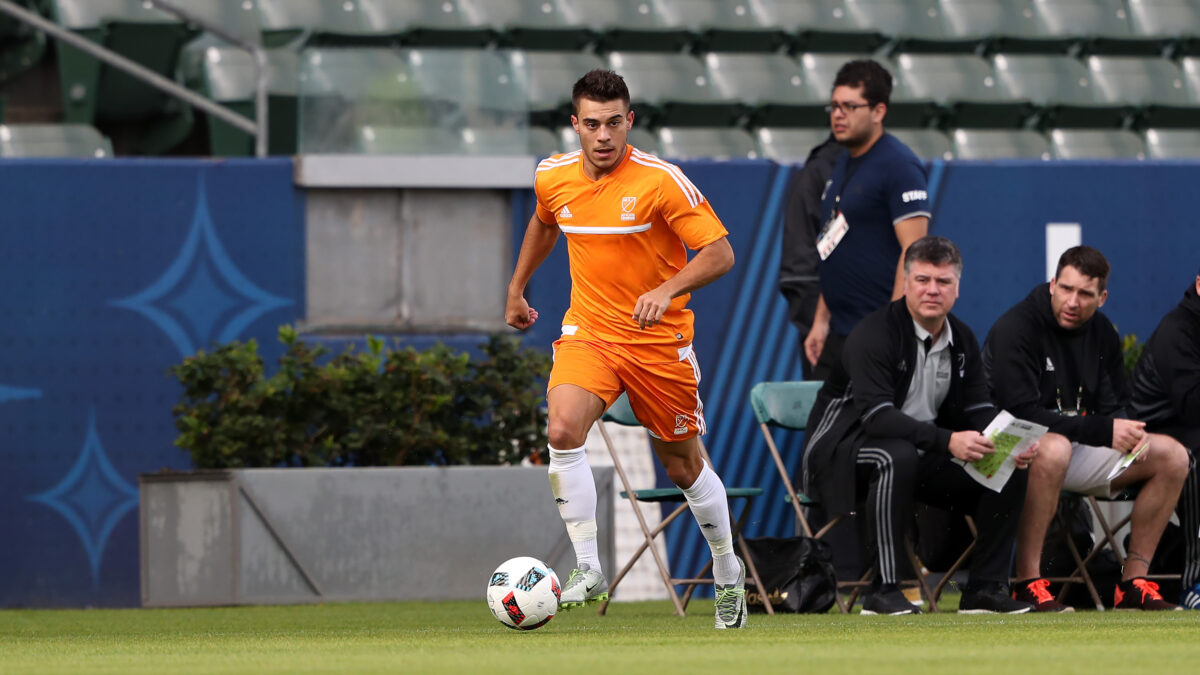 Colton Storm loves a tackle, and he always has. He enjoys the mental aspect just as much as the physical. It’s certainly fun to leap in and win the ball back, but it’s even more fun to look in the attacker’s eyes afterwards and know that the message has been sent.

Storm has been making those types tackles all of his life. Since he was a youth, playing alongside and against the likes of Keegan Rosenberry and Christian Pulisic, he’s been determined to win the ball. Every tackle, every play, is do-or-die, and Storm is determined to never be beaten by the man standing in front of him. That mentality helped Storm become one of the college game’s premier fullbacks, one that is projected to make the leap to MLS when draft day finally arrives.

It’s a leap the former University of North Carolina star has been preparing to make his entire life, and one that he’s ready to tackle feet-first, just like anyone and anything else he encounters between those lines.

“I think back to when I was younger and wanting to win,” Storm told SBI. “I knew the only way I could win is if we had the ball, and I always wanted that ball. I started there and my one-v-ones got better as I got older. I took pride in that: knowing that I’m not going to let this guy or that guy get past me. You hear this guy is fast or crafty, and I love being able to show them they’re not that crafty and hang them up where they think that’s the best part of their game.

“At UNC, I loved tackling people, getting stuck in, getting the ball back. I love attacking as well, but it gives me an edge of confidence that I knew what I was doing. I love it, and I love being out on that island.”

It’s easy to see where the mentality comes from. As a kid, soccer was only half of Storm’s athletic life. The other? Wrestling. It was one of his first loves, a sport that taught him discipline, strength and structure as he got older. For Storm, the mentality stays the same: each encounter is a one-on-one battle, and he isn’t going to mentally break before the other guy does. When a normal player would shy away from contact, Storm still relies on his wrestling roots, running right towards it with full force. Storm says that some people simply aren’t comfortable being uncomfortable, but he certainly is.

As he grew older, Storm brought those ideals to soccer, which became his primary focus as he moved towards high school. He began to realize that, if he worked hard enough, a professional career could be in the cards. Early in his high school career, he moved to U.S. Soccer’s residency program, and was humbled in the process, showing him just how far he had to go to reach the level he wanted to see.

Storm returned home, and sharpened his game alongside some now-familiar faces. He grew up with Rosenberry, playing with him in the Union academy before facing off several times in college. He trained with the Pulisic family towards the end of his high school career, developing his game in the iron-tight community around his hometown Mechanicsburg, PA. At the time, moving on with the Union was certainly option, but Storm says the interest always remained just that: interest. Nothing more.

Eventually, Storm made his way to Chapel Hill and, under the tutelage of head coach Carlos Somoano, he learned his place in the game. He remembers the day vividly. Several games into his freshman season, and after years as a central midfielder, Storm was approached by Somoano before a big match against Wake Forest. The Tar Heels needed a fullback, and Storm would earn the starting nod if he wanted to give it a shot. It turned out to be a match that Storm remembers as one of the best he’s ever played, and he’s never even thought of looking back.

During his time with North Carolina, Somoano has had some spectacular defenders, players like Matt Hedges, Jonathan Campbell and Zach Loyd, and he says the aspect of their game that sets them apart is their sheer willpower. Storm, he says, has that in spades, for better or worse.

“His biggest strength can sometimes be his biggest weakness: he wants to win so bad,” Somoano told SBI. “He wants to impact the game. It’s such a good-natured, positive quality, but there are times where you have to take a little bit more of a measured approach, and that comes with time and maturity, and he’s going to learn there are going to be days where you can’t win the war, and if you lose the battle, so be it.

“His thing always was, ‘I love to tackle and I want to go make that impact’, and that’s what I’m describing. He’s someone who wants to win that game. Sometimes you’re better off not winning the ball, but making sure they don’t score. That ambitious quality that he has is something that he will have to adapt to at any level, but it can be further exposed the higher he goes. He has it. He’s a guy that just wants it so much that he’ll find a way. He’ll never give up easy.”

Somoano says that, if he can Storm finds his way to the right home, he can be great. Storm’s speed is virtually unmatched and his pure endurance is equally impressive. He can run as fast as he does long, a true physical asset for any fullback looking to take their game to the next level.

Despite everything going on around him, though, Storm is trying not to think of the big moment. It’s a good thing to avoid, he says, saying that it took him time to actually realize what’s happening. He’s had dreams and he’s woken up in the morning wondering if this process has even been real.

It certainly is, especially after several standout performances at the MLS Combine.  Storm, who says he models his game after that of DeAndre Yedlin, is one of several highly-regarded fullbacks being scouted in the lead up to the draft, and he says that he’s viewed that concept as a challenge. Facing some of the college game’s elite has been a thrill, one that he’s been preparing for since the college season ended.

Now, he’s preparing for draft day, and all that comes with it. There are new challenges ahead, new players to tackle and new goals to set, and Storm is looking forward to the opportunity of meeting them head on.

“I want to go on to a team and sign a contract and make an impact, that’s for sure,” he said. “I’m sure I’m capable of doing that. I just want to prove to myself that I’m here, that I’m here in this league and that I’m here to stay. I want to make it as long and successful as possible, whatever that may be. Hopefully, God-willing, it’s 10,12 years and we’ll see what’s up, but I’m just focused on the moment in front of me right now.”