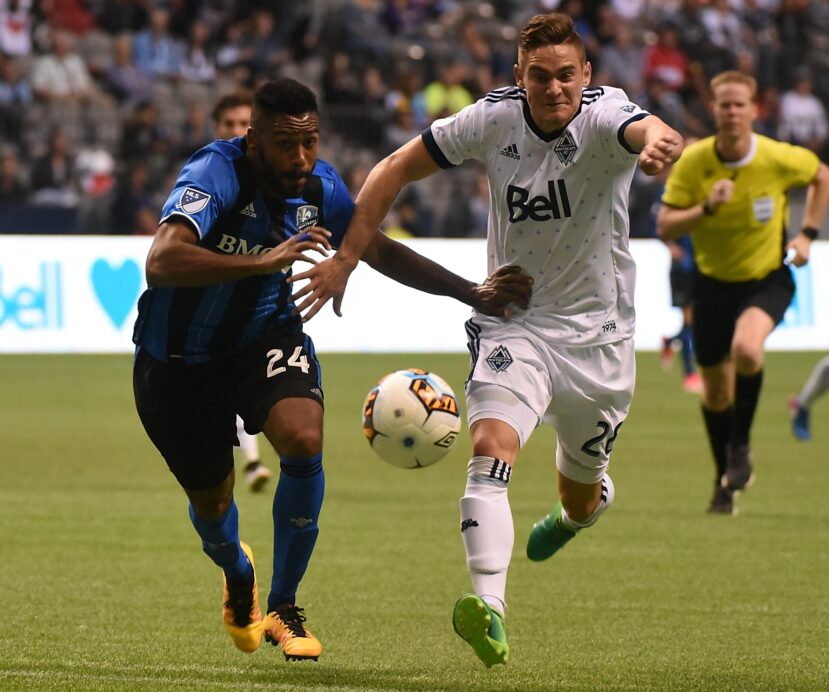 Four teams remain in the 2017 Canadian Championship race as the semifinal round continues on Tuesday and Wednesday with second leg action.

After a stunning win in the opening leg, Ottawa Fury FC looks to pull off the upset against a surging Toronto FC side, one fresh off a 5-0 demolition of the Columbus Crew. Meanwhile, the Montreal Impact are looking to comeback against a familiar foe following a 2-1 loss to the Vancouver Whitecaps in their opening leg.

Here’s a closer look at the semifinal matchips:

Having won 2-1 in first leg, the Whitecaps have the advantage heading to Quebec for the two teams’ second encounter. 20 minutes was enough for the Caps to take an advantage in the series as 16 year-old sensation Alphonso Davies, left to himself at the penalty spot, scored the opening goal in the 13th minute and Nicolas Mezquina added a second goal in the 33rd minute.

The Impact, however, showed in the second half that they were not going to call it quits. Mauro Biello added some experience to his young starting XI and the Impact showed that they could get back into the game. Despite this, it was homegrown player David Choinière who got his his team the lone away goal. Whitecaps goalkeeper Spencer Richey shocked Patrice Bernier by saving a penalty kick that could have leveled the two teams.

Early in the week, Mauro Biello mentioned that Ignacio Piatti, who didn’t make the trio to Vancouver last week, would be available Tuesday night. The status on the Impact’s second Designated Player, Blerim Dzemaili, is still unclear. Homegrown goalkeeper Maxime Crépeau should still be the one defending the Impact’s net.

The Whitecaps, who also fielded a reserved-filled team in the opening leg, had to play in MLS action this weekend. At home in BC Place, the Caps lost, 1-0, to D.C. United and started most of their usual suspects. With the travelling from coast to coast, Carl Robinson will need to decide whether to play his starters on short resting or to field a reserve-leaning squad similar to the first leg.

The Fury caused the surprise in this tenth edition of the Canadian Championship by winning the first leg, 2-1, at home. It didn’t look like it was going to head that way in the nation’s capital however, as the first goal came courtesy of TFC’s Benoit Cheyrou. A one-two combination with Homegrown striker Jordan Hamilton opened the score for Toronto at the 35th minute.

The only non-MLS team still in the competition responded with two unanswered goals. One by way of a penalty kick from Ryan Williams at the 57th minute and another by Sito Seoane, created from a poor back pass by TFC’s Jay Chapman at the 72nd minute.

The Fury have a much higher drive going into this second leg than Toronto FC does. Including the fact that this is their true battle of Ontario, having already played TFC II in USL action, the Fury will want to try and become the first non-MLS side in a Canadian Championship final since the USSF Division 2-era Vancouver Whitecaps in 2010. A first series win over an MLS side would mean a lot for the 2015 NASL Soccer Bowl finalists.

On Toronto FC’s side, things are a little more relaxed. Despite being down 2-1 in the series, Greg Vanney’s squad have got one away goal from TD Place in the bank and can tell themselves that they fielded a reserve-filled team last week. The Reds have played during the weekend but a 5-0 crushing of the Columbus Crew does not sound like a tiring affair, and more starters are expected to see the field on Wednesday night.

Toronto FC has a safety net to fall on this year if they lose the series against the Fury. With the realignment of the tournament, TFC—who are the 2016 champions—could play a playoff game on August 6 to determine the Canadian representative for the CONCACAF Champions League in the event that another team wins the 2017 Canadian Championship.