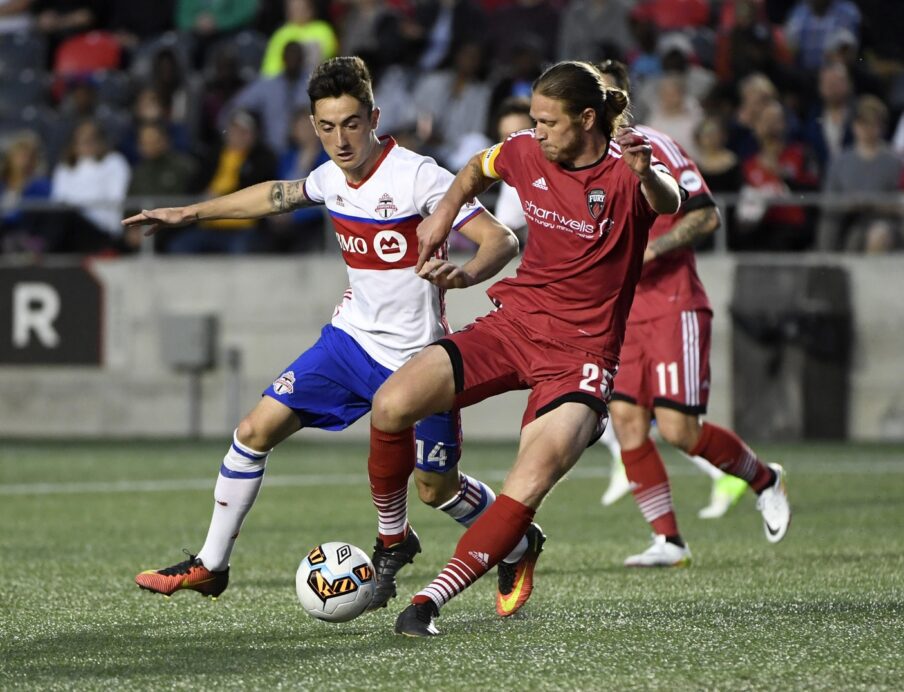 The first legs of the Canadian Championship semi-finals provided one big upset. Ottawa Fury FC’s pair of second half goals gave them a 2-1 advantage over Toronto FC in the first ever match between the two clubs. Toronto’s wasted possession combined with Fury FC’s shocking efficiency provided the first leg upset at TD Place in the Canadian capital.

On the west coast of the country, Vancouver Whitecaps knocked off the Montreal Impact, also by a 2-1 score, at BC Place. The Whitecaps’ star youngster Alphonso Davies scored his second career goal to jumpstart the 2015 winners to a opening leg victory.

Here’s a closer look at the results:

Defending champions Toronto FC will have a bit of a rough hill to climb in the second leg at home thanks to slipping up in the second half against Ottawa Fury of the USL. Benoit Cheyrou provided the Reds’ lone goal in the 35th minute by working a give-and-go with Jordan Hamilton during a run through midfield. the quick move caught the Ottawa backline off guard and he was able to slot home the shot with ease.

The mostly rotated TFC squad would continue to control possession throughout much of the game, but would waste most of their opportunities. They only created ten shots on the night despite holding 65% of the ball. Fury FC made the most of their possession disadvantage as they put seven of their 11 shots on target.

Fury FC would come alive in the second half and they found their first goal in the 57th minute. A mad scramble following a corner not only provided two clear cut chances for the Fury, but also a hand ball in the box against TFC. Ryan Williams confidently scored from the spot to level the score. Poor play by Toronto in their own half would set up the second goal in the 72nd minute. An attempt to switch the play fell short of its target, allowing Tucker Hume to intervene. After some hard work in the penalty area, he was able to touch it off to Sito Seoane, who slipped a deflected shot past Clint Irwin for the winner.

Toronto’s squad was missing many of it’s biggest names. Sebastian Giovinco, Jozy Altidore, and Michael Bradley were all out of the team.

The USL club will take its lead to BMO Field on May 31.

The Whitecaps got off to a flying start through 16-year-old Alphonso Davies. The teenager found himself wide open at the top of the box, where he collected a Nicholas Mezquida deflection of a Brek Shea cross for the easy finish in the 13th minute. The kid would play a vital role in the second goal of the night, as well. His fancy footwork helped him weave through the right side of the Impact back line before laying off to Mezquida, who thundered home the goal. The Whitecaps had a commanding 2-0 lead after 33 minutes and were able to sit back and defend for much of the match.

The Impact would claw back into the game in the 62nd minute. A long pass in from Daniel Lovitz found the head of Anthony Jackson-Hamel. Jackson-Hamel’s tiny flick fell to the rushing feet of David Choinière, who lofted a shot into the top corner to cut into the lead. After finding that first goal, it’s a wonder how the Impact didn’t equalize, or even pull ahead, before the final whistle. The first golden chance came six minutes after the opener. Chris Duvall started the move with a long distance blast that clanged off the far post. The rebound came right to a surprised Jackson-Hamel, who put his attempt wide of the target. The Impact would get a penalty in the 72nd minute after a sliding hand ball in the area, but Duvall’s shot was parried by the strong hand of Maxime Crépeau. Crépeau would make one last game saving stop deep into stoppage time by robbing Patrice Bernier of a goal with a well placed right foot.

The second leg at Stade Saputo will be played on May 30.