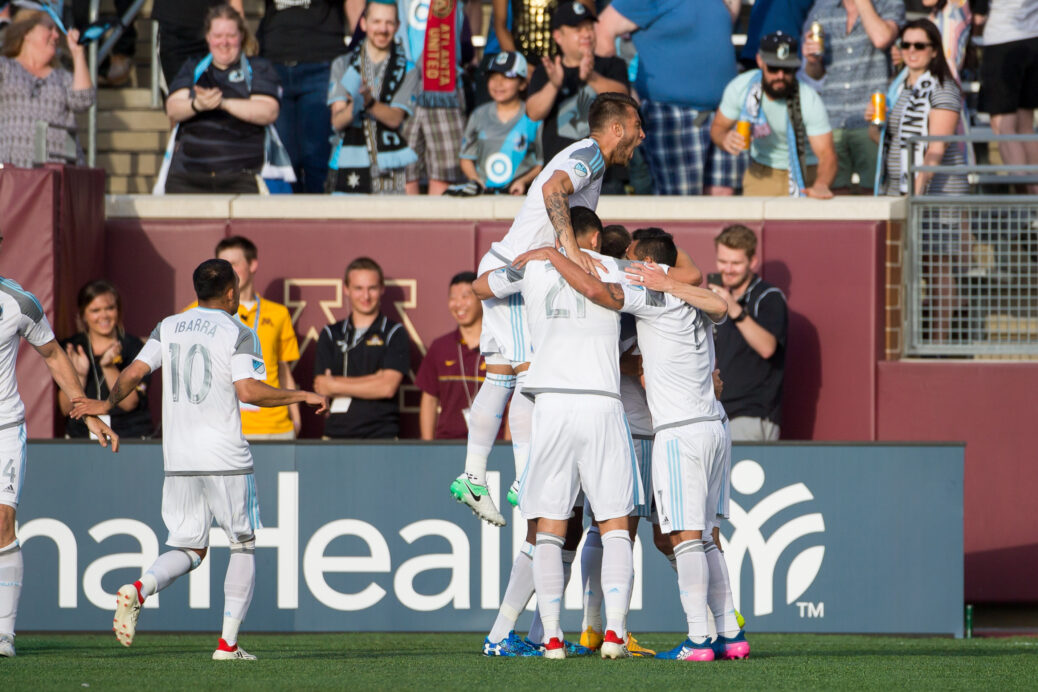 Minnesota United rookie Abu Danladi endured a roller coaster evening on Wednesday, scoring an eventual winning goal and drawing a red card shortly after on a night that saw multiple red cards and own goals, as well as a big home win for the Loons.

Danladi scored the winning goal in the 64th minute to help Minnesota United earn a 3-2 victory at TCF Bank Stadium.

Minnesota United exacted revenge over its season-opening drubbing at the hands of the Portland Timbers, with a victory, defeating the visiting Timbers this time around, 3-2.

Danladi only had six minutes to enjoy the goal though after being issued a red card after he and Timbers midfielder Sebastian Blanco traded kicks on the ground after a Danladi challenge sent the two to the ground. Blanco reacted to the challenge by kicking Danladi in the chest as he lay atop the rookie, leading to Danladi’s own kick-out in response.

The Timbers pushed hard for an equalizer with the teams playing 10 on 10, but the Loons defense held up well to secure their fifth win of the season. The loss continued the Timbers road woes, as it marked their fifth straight defeat away from Providence Park.

After a first half that included an Amobi Okugo own goal and Diego Valeri penalty kick, the match opened up in a big way in the second half. Christian Ramirez beat the backline and chipped Jeff Antinella just two minutes into the half. Minnesota’s joy was short lived, however, as they surrendered an own goal just a minute later. Francisco Calvo’s attempted block on the cross from Vytas found the back of the net and the score was level once more.

The Timbers began to control the match, but fell susceptible to a counter attack in the 64th minute. Danladi took advantage of a Jeff Antinella mistake and put Minnesota ahead for good. Antinella attempted to clear a cross into the box, but collided with Timbers fullback Vytas. The ball fell to Danladi and the rookie finished easily into the open net.

Sam Cronin helped open the scoring on an own goal in the 7th minute after a flurry of chances for Minnesota United from three straight set-piece opportunities. Following a corner kick, the ball popped back out to Ibson. The midfielder fed the ball back into the box to Kevin Molino, who found the onrushing Cronin. His cross was turned into the net by Amobi Okugo for the own goal and the early Minnesota lead.

Minnesota United stayed in the driver’s seat for most of the first half, but failed to add to their tally. Jeff Antinella did well to keep Portland in the game, making several big saves. The Loons created five shots in the first half, all but one were on target. As the half waned, the Timbers began to creep back into the game.

The Timbers grabbed an equalizer just before the half from the penalty spot, as Bobby Shuttleworth came off his line to challenge Valeri. Shuttleworth clattered into Valeri’s back and Ted Unkel immediately pointed to the spot. Valeri buried the penalty kick to level the score in the 37th minute and negate some of the good defensive work Minnesota United accomplished in the half.

Ibson was all over the field for the Loons all game long. His defensive work rate and calm distribution were key to Minnesota United holding sway over a dangerous attacking side like the Timbers. The former NASL man played an integral part in each goal despite not having a direct assist. His ability to pick out third line passes was invaluable on the night.

Christian Ramirez’s go-ahead goal to start the second half was a thing of beauty. The striker danced a fine line to beat the back line, popped the ball up to himself, and chipped Jeff Antinella to finish the sequence. Ramirez might be holding a grudge for missing out on the Gold Cup roster, and the league should take notice.

Fanendo Adi will want to skip the replay session this week. The Timbers forward was largely a ghost in the match and never looked comfortable in the attack, managing just a single shot on the night. The Timbers offense is largely driven by the effectiveness of the striker, and on this evening he was not in sync. Considering his hat trick the last time these teams met, the expectations outweighed the delivery for Adi.