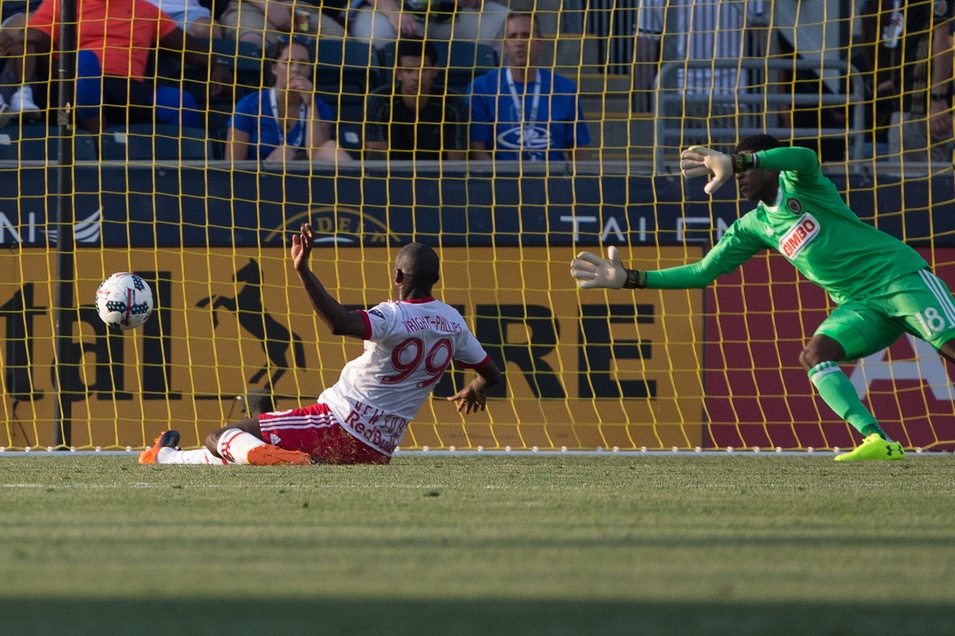 CHESTER, PA– Mr. Reliable may not have had the best of games, but he showed up when the New York Red Bulls needed him the most.

Bradley Wright-Phillips scored a brace late in the second half to power the Red Bulls past 10-man Philadelphia 2-0 on Sunday night.

The Union went down to 10 men in the 53rd minute, when Derrick Jones was ejected for a dangerous tackle, and despite plenty of fight in the final 37 minutes, it was not to be for Jim Curtin’s men.

The best chances of the first half came toward the back end of the stanza, with the first coming from Alex Muyl in the 38th minute. Muyl tried to poke a shot through at Andre Blake, but the Jamaican netminder was there for the kick save.

The Union’s best opportunity came on the final stroke of the opening 45 minutes, when Chris Pontius’ header went just wide of the left part of the net.

The match changed in an unexpected fashion in the 53rd minute, when Derrick Jones needlessly went into a tackle with his studs up and both feet. The challenge didn’t cause a ton of harm, but it was the right decision due to the potential dangerous nature of the play.

Escalating pressure from the Red Bulls while up a man started right after the ejection and the visitors almost took the lead in the 63rd minute, but Muyl’s free header bounced off the left post. They inched closer in the 67th minute, but Sacha Kljestan’s free kick soared inches over the crossbar.

The game-winner finally came for the Red Bulls in the 87th minute, when Wright-Phillips sneaked through a pair of defenders to tap home Kemar Lawrence’s cross.

Wright-Phillips scored once again in stoppage time of the second half, as he knocked home an open chance in the middle of the penalty area.

Philadelphia and New York will renew hostilities in 10 days in the U.S. Open Cup fifth round at Red Bull Arena.

Wright-Phillips showed up at the right place in the right time, like he normally does, to score the game-winning goal and a late insurance strike in  stoppage time.

The game-winner from Wright-Phillips handed the Red Bulls a massive boost after a frustrating second half full of empty chances.

Derrick Jones carelessly went into his challenge in midfield and it cost the Union a result at home in the end.