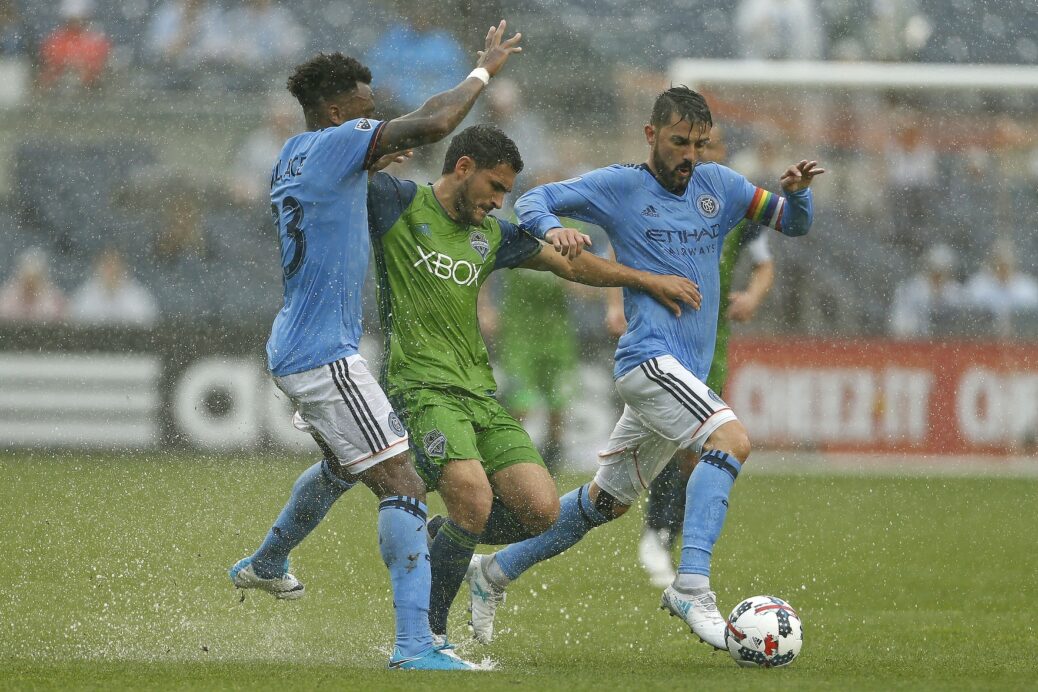 The rain stopped just about everything on Saturday afternoon at Yankee Stadium. Routine passes fell short and players regularly soared across the grass like a child on a Slip N’ Slide.

The Spanish star scored two second-half goals on Saturday, leading NYCFC to a come-from-behind 2-1 win over the visiting Seattle Sounders. The win is NYCFC’s second in as many MLS matches.

With the score tied 1-1 late in the match, it was NYCFC’s captain that provided his second goal of the afternoon. The forward was on the end of a Jack Harrison cross, and found himself in acres of space on the backpost. Villa then smashed a first-time volley, beating Stefan Frei to seal the win.

The first half was largely waterlogged, headlined more by comedy than brilliant play. The ball routinely got stuck in puddles and seemingly well-worked chances died due to the rain. One such chance, a brilliant ball in from Harry Shipp, saw the ball stop behind Jordan Morris, an undeserved end for a well-hit cross.

Despite the flooding, the Sounders did eventually break through through Cristian Roldan, who darted through the defense and towards goal. The finish was simple, leaving Sean Johnson helpless as the Sounders took the lead in the 40th minute.

Moments after Roldan’s goal, NYCFC almost equalized as  Villa’s shot smashed off the post. Early in the second half, though, Villa got his after earning a penalty kick. The Spaniard blasted the shot past Frei, leveling the score in the 51st minute.

NYCFC remained on the front foot for a majority of the match, but neither side could create much of anything due to the conditions. A Maxime Chanot header early in the second half was close to being a go-ahead goal but, outside of the miss, neither team found legitimate chances on goal. That was until Villa’s late stunner, earning a home win for NYCFC.

Following the win, NYCFC looks ahead to next week’s derby clash with the New York Red Bulls. The Sounders now push on to a midweek match against Orlando City.

With two goals to his name, is there any doubt? Villa scored his 50th and 51st career MLS goals on Saturday, leading NYCFC to a come-from-behind win.

There were several memorable moments involving the rain, but the biggest of the game came via a Villa goal. Tied at one apiece, a cross in from Jack Harrsion found Villa, and the Spaniard’s thumped volley left Frei with no chance.

Saturday’s match was one to forget for most involved, as the rain and lackluster field conditions made the sport of soccer all but impossible to play.