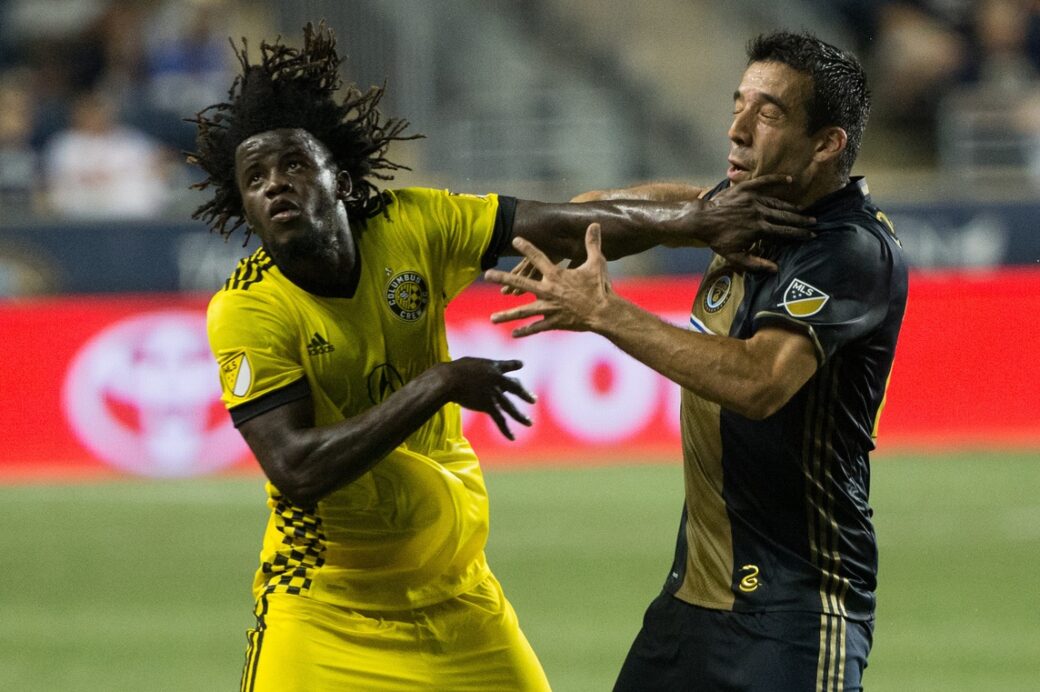 The Columbus Crew came into Wednesday’s road showdown against the Philadelphia Union, looking to sweep the season series and create more distance from their postseason rivals in the Eastern Conference.

However, a red card handed out in each half and the concession of three goals saw the Crew take a step back after defeating the Union 1-0 at Mapfre Stadium just four days prior.

A 20th-minute goal from Ilsinho put the hosts up 1-0, before things got interesting after the hour mark. Crew defender Jonathan Mensah was given a straight red after bundling into C.J. Sapong on a breakaway opportunity.

Despite Roland Alberg’s penalty kick being pushed off the bar by Zack Steffen, the Crew failed to do much offensively for the remainder of the match. Sapong extended the lead to 2-0 after 66 minutes, before the Crew were again reduced by referee Ismail Elfath.

Lalas Abubakar saw a straight red after violent conduct on Ilsinho, after the Brazilian looked to block the defender from playing an advantage. Abubakar, 22, who was making only his third MLS appearance of the season, gave Ilsinho a shove but the Union midfielder fell to the ground.

Following the match, Berhalter lashed out the officials, and not just for Elfath’s decisions on the pair of red cards.

“It’s difficult when you have to beat two opponents in one night,” Berhalter said. “We had to face Philadelphia and the referees.”

“I take issue with everything, the whole performance by these referees,” Berhalter said. “On Mensah’s challenge, he wins the ball, tries to play the ball and gets whistled and Philly are handed a penalty kick. I’m not so sure that the foul is even inside the box either.”

Wednesday’s red card for Mensah was his second of the season, the other came in a 3-1 road loss against Houston. The Ghanian is tied for second in appearances by a Crew defender this season, but has found it tough at times to cope in MLS.

Abubakar’s red card was shocking to see after the defender looked to try and get around Ilsinho to play an advantage. Despite being sent off, the 22-year-old won’t change his style of play at all.

“I’m trying to grab the ball from him [Ilsinho], and I get a red card, I don’t know what I did wrong,” Abubakar said. “The way I play is aggressive, that’s how I play, and the referees aren’t going to change that.”

Wednesday night wasn’t the first time the Crew took issue with a red card going against them inside Talen Energy Stadium.

“It seems like every time we come to Philly, we get a red card,” Crew midfielder Justin Meram said. “It’s pretty interesting, Conor Casey gets sent off against Philadelphia in 2016 for barely touching the guy, it’s just comical.”

Before the first red card, the Crew had a golden chance to draw level before the half-hour mark. Ola Kamara’s right-footed effort struck the crossbar after Kekuta Manneh’s prior effort was blocked from close range.

The effort was there for the Crew, but overall the Union took advantage of their offensive opportunities when it mattered.

“I’m proud of these guys for the effort tonight, we’re putting this game behind us and focusing on Saturday at Real Salt Lake,” Berhalter said.

The defeat for Columbus was their second in the month of July, and their first since July 1. They’ll continue their three-game road trip with a showdown at Real Salt Lake on July 29th, before heading to San Jose on August 5th. With Abubakar and Mensah both now suspended for Saturday’s contest, the team will have to make some changes in the backline.

“It’s going to be a challenge no question, this is something we’re going to have to deal with as we prepare for RSL,” Berhalter said.