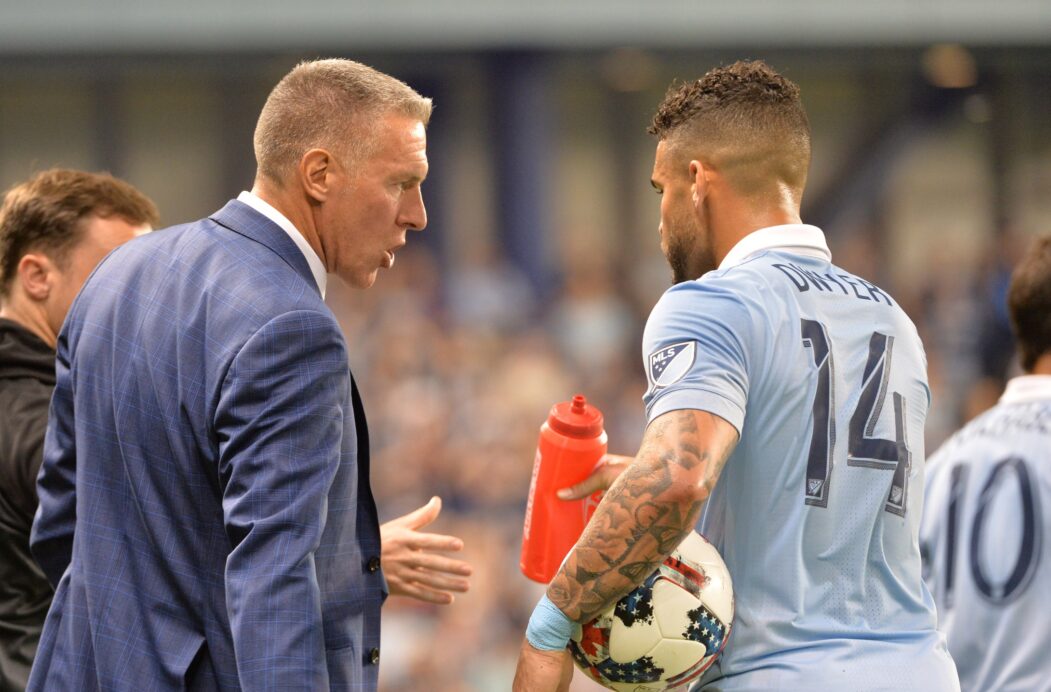 Sporting KC shocked the MLS landscape on Tuesday afternoon. In the midst of a campaign that has seen the team contend from the offset, the club stunned the league by trading Dom Dwyer, a player long identified as the club’s best forward and attacking heartbeat, for a record haul.

Manger Peter Vermes is no stranger to midseason sales and tough decisions, and the decision to trade Dywer to Orlando City was just that: a tough one. However, it is one that Vermes felt needed to be done, in both the short and long term, as Sporting KC looks to contend this season and in seasons to come.

Moving on from Dwyer was, obviously, difficult. He scored a club-record 22 goals in 2014 and leaves as the club’s second all-time leading scorer with 57 goals in 128 games. He had recently become a U.S. Men’s National Team player, adding further to his value off the field. He was one of the few key links to the club’s 2013 MLS Cup-winning team.

The deal, when all was said and done, came to a total of $1.6 million, more than two-and-a-half times the next biggest deal in league history. Of that, $700,000 comes via incentives. Vermes says he is “100 percent convinced” those incentives will be reached with several of them possibly coming before the weekend is over.

In some ways, Vermes says, the deal was influenced by the league’s newfound transparency. Dwyer’s trade dwarfed the $450,000 in General Allocation Money and $200,00 in Targeted Allocation Money Orlando City received in exchange for Kevin Molino to start the 2017 season. In the end, it was about resources. In moving Dwyer, a resource not guaranteed beyond 2018, Sporting KC brought back a record haul that could be used to better the club for the next several years.

“I have to look at the short and long-term aspects of the organization,” Vermes said on a conference call on Tuesday. “When we’re in the salary cap industry like we are in our sport, you are going to want players on your team and you can’t keep everybody because of the financial constraints that are imposed upon you based on the salary cap. In this situation, it was going to present itself to be very difficult.

“When would anybody say was the right time? At the end of the season? If you do it at that time, people would say, ‘Well why are you doing it now?’ I don’t know if, when you make a move, it’s ever the right time for everyone but this made sense at this point, to do what we did, and for us, we maintained competitiveness within this league for a long period of time and on a consistent basis, and that continues to remain our objective.”

Vermes says the process that led to Dwyer’s trade truly began in March. Dwyer’s current deal pays him $668,750 in guaranteed compensation and, according to Goal USA, that number was set to rise to up to $1 million 2018, the final year of his contract.

With about 20 months left on the forward’s deal, the club approached Dwyer’s camp to begin negotiations on a new contract. The typical back-and-forth followed. Dwyer’s camp rejected the initial proposal, Vermes said, leading to counter offers from both sides and back and forth. There were reports of a potential overseas move, but MLS clubs only receive a small chunk of any transfer fee to reinvest as GAM, making a move abroad less desirable for the club.

Eventually, negotiations reached a standstill as Dywer went off to join the U.S. Men’s National Team for the Gold Cup. Shortly after he scored his first international goal in his first USMNT appearance, reports surfaced discussing the ongoing negotiations and the potential of a Dwyer move. An influx of calls soon followed, and they weren’t the first, but Vermes says they were the most serious.

Vermes says there were several teams that came in “heavy and hard” with initial discussions, and those discussions continued on until the last few days. One of them was Orlando City, and given Dwyer’s history with the club, Vermes felt it was the correct move to do right by the player and trade him to a team he knew the forward would want to play for.

“How do we replace Dom? I don’t know if you do,” Vermes said. “You go and find another player that hopefully gives you other strengths that you can make work. He’s a tremendous player for us on the field and a great guy for our club. It’s not going to be easy to replace, but at the same time, these are incredible resources to help us manage the salary cap over the next several years depending on how smart we are with that money.”

The rumor mill regarding replacements has already started. The club has already been linked to former forward Krisztián Németh, and it would almost certainly require some finagling to get him.

Whether it’s Németh or someone else, Sporting KC now has freedom. They have a treasure chest of assets and are seemingly in no rush to use them all. Vermes is confident in the group he has, including Designated Player Gerso Fernandes and forward Diego Rubio, to step in, at least in the short term. He’s also confident in his league-best defense to keep teh team pushing on towards the postseason

I say this with all due respect from a tampering perspective: it’s hard for me to talk about specific players,” Vermes said. “(Németh), and many others, are in play. The question is going to be if we can get a deal done with another player in the short term or if it winds up being the next window.

“I want to make it clear that it’s not like we’re reacting to this situation. Our roster is fluid. It’s never completed. We constantly have a set of targets in every position. It’s something we’ve already been looking at for quite a long time. We’ll make the appropriate acquisitions at the right time when it best supports the club.”