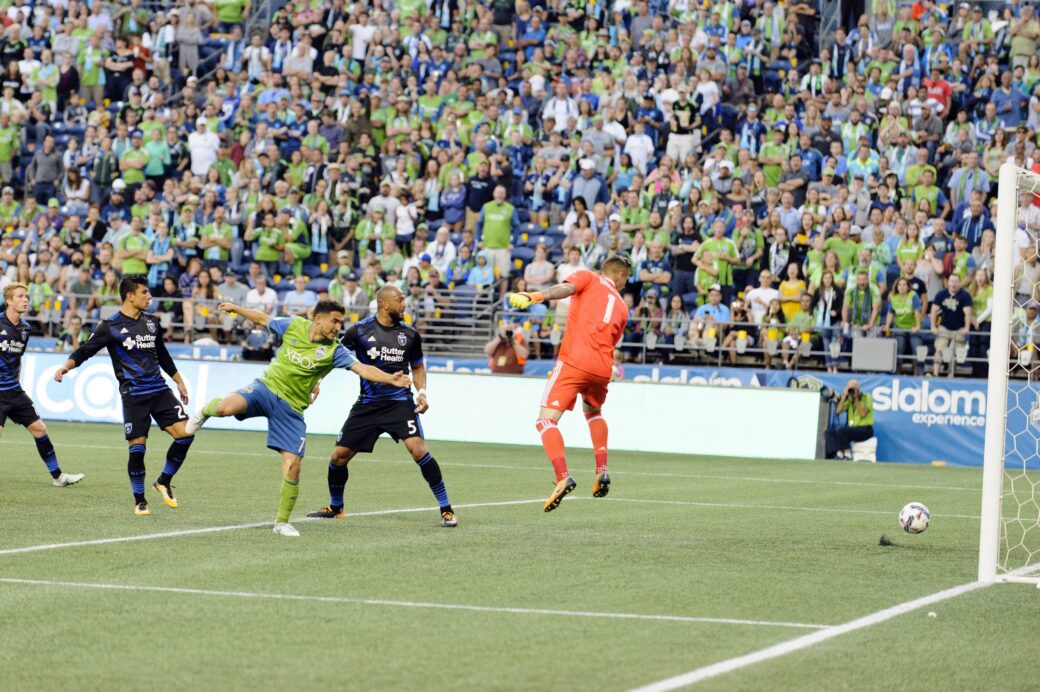 It used to be the calling card of Bruce Arena’s LA Galaxy, this easing into the season before finding your stride. But for the second season in a row the Seattle Sounders seem to be putting a slow start in the rearview mirror come late July. Last year the turnaround ended in an MLS Cup victory. December is a ways off yet, but the Sounders look far more the serious contender as August approaches than they did in early June.

The Sounders (8-7-6, 30 points) trounced the visiting and historically troublesome San Jose Earthquakes on Sunday night, rolling to a 3-0 victory in front of 43,528 at CenturyLink Field. After seeming every bit a team suffering a championship hangover early in the season (while also battling injuries across an aging back line), Seattle has suddenly won three straight, posting a 6-2-2 record over its last 10 games.

The latest victory came courtesy of a rising star and a new acquisition, and came despite missing four of their most important — and certainly highest paid — players.

Cristian Roldan opened the scoring in the 54th minute, rising utterly unmarked in the heart of the penalty area to meet a redirected throw-in from Kelvin Leerdam and cleanly heading past goalkeeper David Bingham, who got caught in no-man’s land for the first (but not last) time of the night.

Roldan, an ascendent third-year midfielder out of the University of Washington fresh off his first stint with U.S. men’s national team, doubled the lead less than two minutes later. Once again Leerdam — making his first start since signing with the Sounders in early July — initiated things with a pinpoint throw-in to Will Bruin, who headed the pass into the penalty area. Veteran Earthquakes center back Victor Bernardez, for years a steadying force for San Jose, got to the ball first but took a soft extra touch that spoonfed Roldan, who chested the ball down to his right foot and rifled a shot past Bingham and inside the far post for the 2-0 lead.

Roldan nearly completed the hat-trick in the 58th minute, forcing Bingham into a leaping save on a header off a cross from right back Nouhou Tolo.

Leerdam polished off the Earthquakes himself in the 65th minute, stepping into a Joevin Jones corner kick that curled through a tangle of bodies to find the Dutch fullback at the far post for a simple tap-in and a 3-0 lead.

After trailing D.C. United 3-0 just after halftime on Wednesday, the Sounders have outscored their opponents 7-0 over ensuing 130 minutes.

The loss leaves the Earthquakes (7-9-5, 26 points) with questions. After firing club icon Dominic Kinnear as head coach in late June, the Earthquakes won three straight games, including a 2-1 victory over the Sounders. But they have now lost three straight league matches and find themselves looking up at the red line, an all-too-familiar position since the demise of the Bash Brothers squad that won the 2012 Supporters’ Shield.

Not for the first time this season, the Sounders  took the field absent a slew of key players. Missing on Sunday were Clint Dempsey, Jordan Morris, Nicolas Lodeiro, and Osvaldo Alonso. Dempsey and Morris were fulfilling CONCACAF Gold Cup duties with the U.S. men’s national team, while Lodeiro sat after picking up a straight red card late in Wednesday’s 4-3 victory over D.C. United. Alonso missed his second straight match since spraining his left knee on July 4, and is not expected back any time soon. Reserve fullback Oniel Fisher also missed the match serving with the Jamaican national team that defeated Mexico on Sunday to advance to the Gold Cup final.

In more positive news, center back Chad Marshall returned to action after missing Wednesday’s match with a back injury, and Leerdam made his first start since signing with the Sounders in early July. Goalkeeper Stefan Frei also returned after missing a match to nurse a strained hip. The 31-year-old from Switzerland had started 57 straight matches.

Six of one, half-dozen of the other, but the nod goes to Cristian Roldan over Kelvin Leerdam in what seems to be the Summer of Roldan. Sunday night’s brace follows up a game-winner in Wednesday’s historic 4-3 comeback victory over D.C. United. He began the season in March as a promising young MLS midfielder. Just a few months later he has undoubtedly worked his way into early contention for a spot on the USMNT’s 2018 World Cup roster.

We’ll say moments. Despite the final score and some horrific defending and goalkeeping down the stretch, San Jose did have good opportunities to score in the first half. If better finishing finds the back of the net the whole tenor of the match changes.

David Bingham.  He has had some very nice games against the Sounders in the past, but it’s nigh impossible to defend his positioning on at least two of the Sounders’ goals.