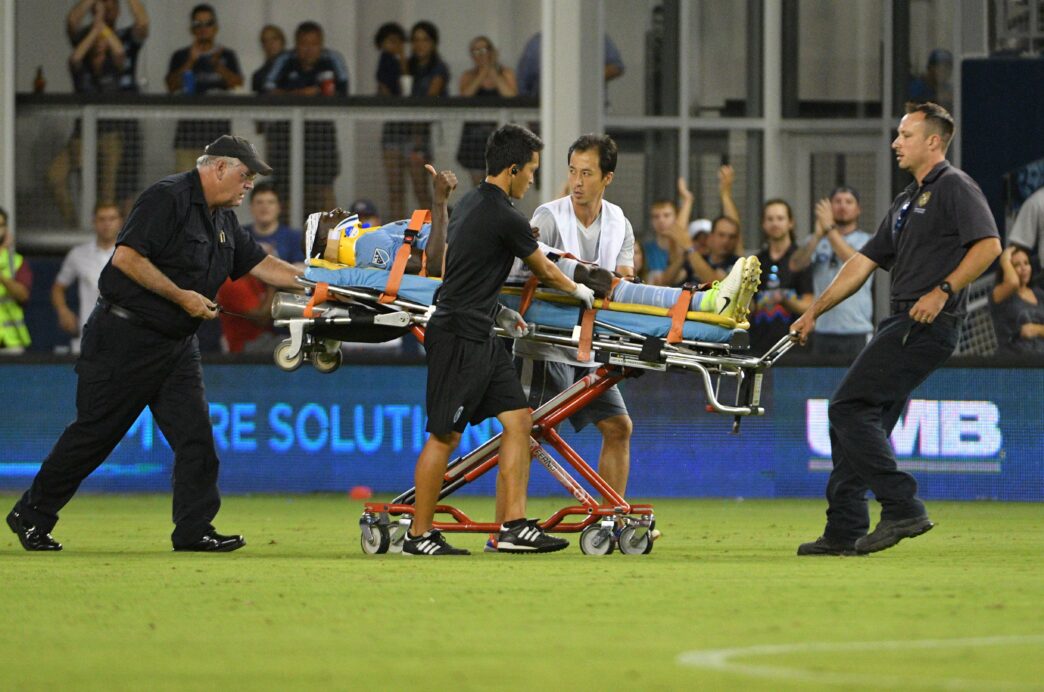 Ike Opara, on the cusp of a season that would cement him as one of the best defenders in MLS, will miss extended time due to another unfortunate injury.

In a very scary moment, the Sporting Kansas City defender went to head a ball away from FC Dallas’ Maxi Urruti, whose attempted bicycle kick caught Opara square in the face. He was stretchered off the field after several motionless minutes, giving a thumbs up on the way, but while Opara was awake and alert at the hospital, he was unfortunately diagnosed with the most severe grade of concussion, reports The Kansas City Star.

Opara was later released from the hospital on Thursday afternoon, having been diagnosed with a grade 3 concussion, Sporting KC announced. He will now enter the league’s concussion protocol. There is no timetable set for his return.

“It’s tough. We are praying for Ike,” said defender Erik Palmer-Brown. “It wasn’t intentional, but it’s tough to see one of your teammates, a leader on your team, the rock on the defense, a guy that has dragged me along kind of like my older brother. It’s tough to see him go down. But for us, we saw how hard the was playing and all the effort the has given us this year. We were doing it not only for the Pattersons after that, we had extra motivation for Ike.”

Sadly, missing extended time due to injury is not an unfamiliar situation for Opara. While with the San Jose Earthquakes, Opara suffered season-ending foot injuries in 2010 and 2011. He suffered a concussion in 2012, causing him to miss a month of the season, and then endured season-ending ankle and Achilles injuries in 2014 and 2015. While his season may not be over, Opara will almost certainly miss extended time due to the severe nature of the concussion. Urruti, who was sent off for the kick and was visibly distraught, checked on Opara in the Sporting KC locker room after his ejection.

Though Sporting KC ultimately won the match, 3-0, in a game featuring three red cards, it came at a very steep cost in losing their potential Defender of the Year. They’ll have to advance to the semifinals, and the latter parts of the regular season, without Opara.