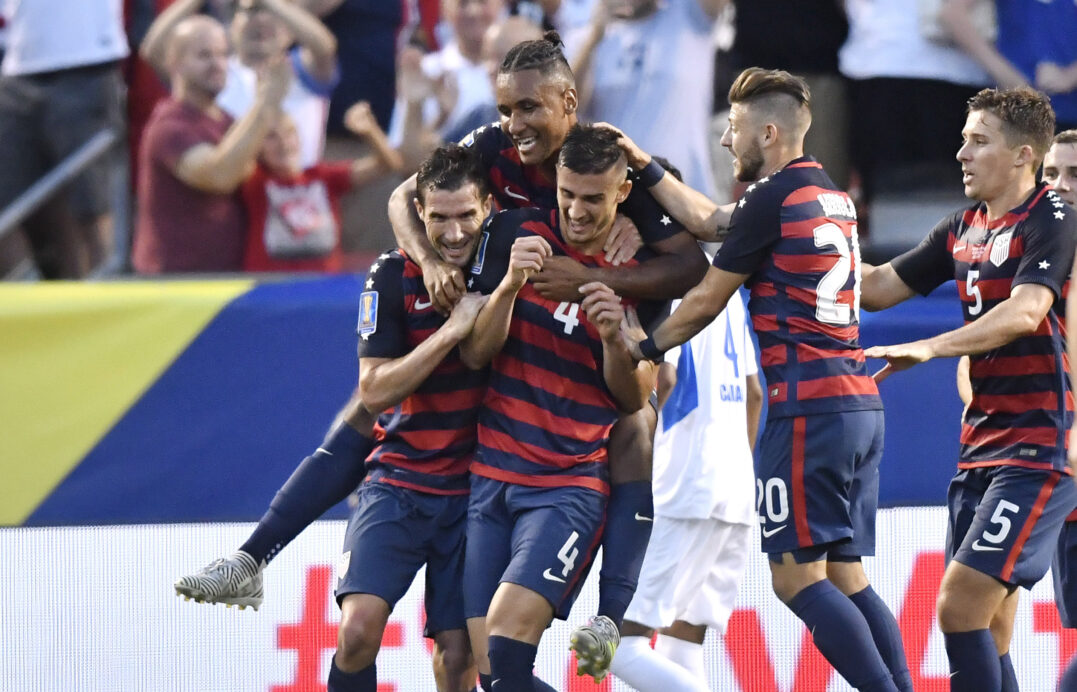 CLEVELAND — The U.S. Men’s National team needed a big win to secure first place in its Gold Cup group, and avoid a brutal quarterfinal draw, and the Americans delivered in dramatic fashion.

Goals from Joe Corona, Kelyn Rowe, and Matt Miazga gave the USMNT a 3-0 victory it needed to overtake Panama for the top spot in Group B. The big win over Nicaragua gives them seven points on the tournament and means they overtake Los Caneleros on the goals scored tiebreaker.

The Americans looked they might fall short of their goal, after two missed penalty kicks left them leading 2-0 as time wound down at FirstEnergy Stadium, but Miazga delivered the crucial goal in the 88th minute to secure first place in Group B.

The U.S. will now face either Honduras, El Salvador or Jamaica in the Gold Cup quarterfinals on Wednesday in Philadelphia.

Bruce Arena trotted out a heavily rotated starting lineup than the one that took the field in the team’s 3-2 win over Martinique. Goalkeeper Bill Hamid made his tournament debut, as did defender Matt Miazga.

The USMNT struggled to create many strong chances in the first half. In fact, Nicaragua came closer to scoring the opener than they did. Luis Galeano took advantage of sloppy American defending and a poor touch from midfielder Dax McCarty to almost float a shot past Bill Hamid, which ultimately sailed high and wide to the right.

Their lone goal of the first half came in the 36th minute when Joe Corona received a pass in acres of space along the left flank before cutting inside past a pair of defenders to free himself for a shot. His subsequent shot took a deflection before slipping just inside the post.

The USMNT came close to doubling its lead in the 50th minute when Dom Dwyer was hauled down when making a run at goal for a penalty. The Sporting Kansas City forward promptly stepped up to the spot and fired a poorly directed shot right into a diving Diedrich Telez.

The USMNT didn’t let the saved penalty sap its momentum, however, as the second goal arrived quickly after Dwyer’s missed opportunity. After hard pressing to win the ball upfield, Alejandro Bedoya slipped a ball to Kelyn Rowe on the left wing, and his shot was deflected past Telez for the 2-0 lead.

The USA earned another chance from the penalty spot in the 63rd minute thanks to a sliding handball in the penalty area on a beautiful cutback from Bedoya. Corona confidently stepped up to take it, but his poorly-placed shot found only the body of Telez in the Nicaraguan goal for his second penalty save of the night.

The Americans continued to probe forward at every opportunity as they searched for an all-important third goal. They gained a numbers advantage in the 86th minute when Nicaragua’s Luis Copete was shown a second yellow for a rough challenge on Juan Agudelo to halt a USMNT breakaway. Graham Zusi’s ensuing free kick was perfectly placed and found the diving head of  Miazga for the crucial goal, putting the Americans atop Group B for good.