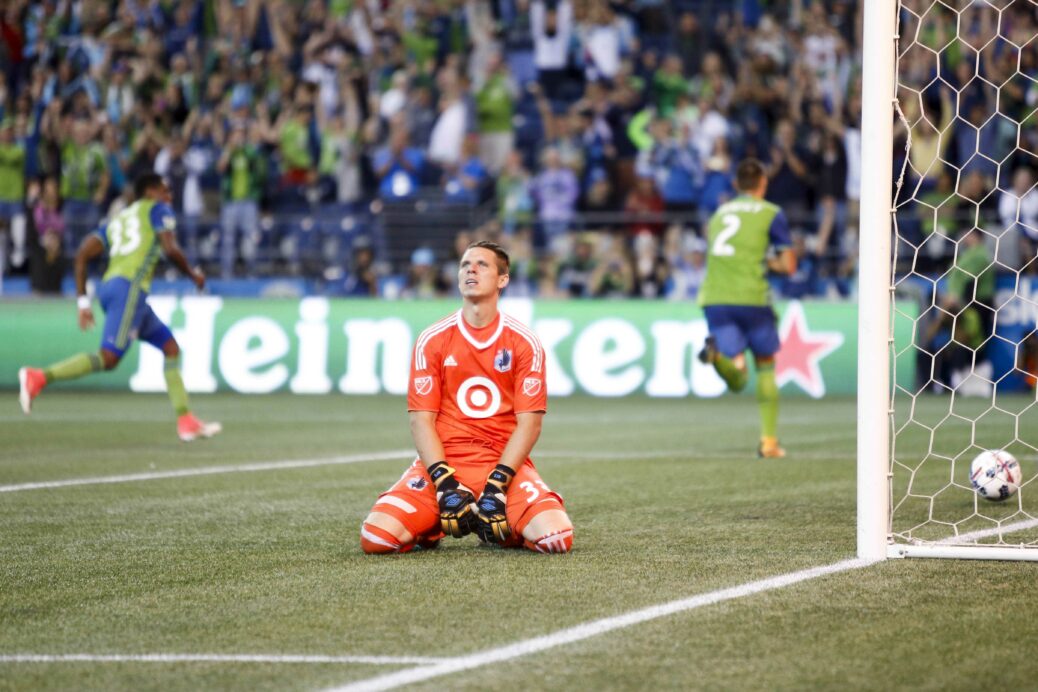 SEATTLE– Three minutes of stoppage time had ticked down to just 30 seconds on Sunday night, leaving the expansion Minnesota United — arguably the worst team in all of MLS — mere moments from earning a most unexpected road point against the defending champion Seattle Sounders.

But the Sounders (11-7-7, 40 points) earned one last corner kick, almost surely the final play of the game. Designated Player Nicolas Lodeiro first headed Joevin Jones’ corner toward goal, only to see the shot cleared off the line by a Minnesota defender. The clearance ricocheted to Clint Dempsey on the half volley. Late substitute Jermaine Taylor dove and blocked the shot, but left his arm in the air.

Goalkeeper Bobby Shuttleworth guessed right on the ensuing penalty kick and even got a glove to the ball, but couldn’t stop Dempsey’s shot from finding the back of the net for his 11th goal of the season and a stunning 2-1 Sounders victory in front of 40,312 at CenturyLink Field.

The Sounders are 9-2-3 in their last 14 matches, and have won six out of their last seven. It was not a pretty match on Sunday, not the kind of soccer likely to best the Portland Timbers next weekend, let alone defeat the likes of Toronto FC or NYC FC. And yet the Sounders are undefeated in nine, have not lost since June 17, and have not lost at home since May 6. The victory leaves them in first place in the Western Conference, tied with Sporting KC on points and holding the tiebreaker.

Minnesota United (6-14-4, 22 points), on the other hand, found more heartbreak in a trying debut season. After a horrific start saw the Loons allow 18 goals in their first four MLS matches, Adrian Heath’s men bounced back to post a 3-2-1 record over their next six matches. The recovery was short lived, however: after Sunday’s loss Minnesota has posted but three wins since May 7 (3-9-2).

And yet for much of the night the Loons (even without leading scorer Christian Ramirez, out with a hamstring injury picked up in late July) had every chance to escape the Emerald City with at least a point.

Ethan Finlay, making his debut after being acquired from the Columbus Crew for cash on Aug. 9, opened the scoring in the 21st minute. The midfielder stepped into space between defenders near the top of the penalty area and gathered a pass from Brazilian teammate Ibson before charging toward goal and slotting past goalkeeper Stefan Frei from 8 yards out. It was the fourth assist of the season for Ibson, the second goal of the campaign for Finlay.

Rookie forward Abu Danladi — the first overall pick in the 2017 SuperDraft — nearly doubled the lead moments later, streaking alone into the penalty area but sending a shot wide right from the edge of the 6-yard box. Center back Roman Torres initially misplayed a long ball over the top from Loons midfielder Sam Cronin, leaving himself easily rounded by the 21-year-old Ghanaian rookie.

It was a dilly of a thing, an expansion side without so much as a road win to its credit traveling to one of the league’s most intimidating venues and taking a 1-0 lead against the run of play and nearly adding an early insurance goal. This without its leading goalscorer and against the defending champions, a team that had not allowed a goal over 421 minutes dating to July 19.

But hoisting a league cup has endowed the Sounders with a newfound measure of composure — the stiffness of spine that transformed a 3-0 deficit into a 4-3 victory against D.C. United in mid-July — and the hosts replied a mere 10 minutes later, Chad Marshall rising to head a Lodeiro free kick past Shuttleworth for the equalizer. Defender Michael Boxall slipped and fell on the play, leaving the 6-foot-4-inch Marshall free to collect his first goal of the season. It was also the ninth assist of the year for Lodeiro.

Dempsey nearly netted the go-ahead goal in the 66th minute, getting his head on a deflected Kelvin Leerdam cross at the edge of the 6-yard box but failing to seriously trouble Shuttleworth.

Looking forward, the Sounders drive up Interstate 5 to visit the Vancouver Whitecaps on Wednesday before hosting the Portland Timbers on Sunday. Minnesota United visits the Chicago Fire on Saturday.

Clint Dempsey. Seven goals in his last six games, and he both earned and converted the game-winning penalty kick. Honorable mention to Kelvin Leerdam, who is proving more than the Sounders could have possibly hoped for at right back.

Danladi’s miss in the 23rd minute. A 2-0 lead might have been enough. A lone goal, though, always felt insufficient for an expansion team on the road against a formidable opponent.

Abu Danladi. The potential is clearly there in spades, and the rookie did many good things on Sunday night. But he also failed to put a shot on frame from the edge of the 6-yard box in the first half, and then failed to challenge Frei on a golden opportunity early in the second half. Could have picked up a brace. Should have had at least one goal.