Clint Dempsey does it again as Sounders top Sporting KC 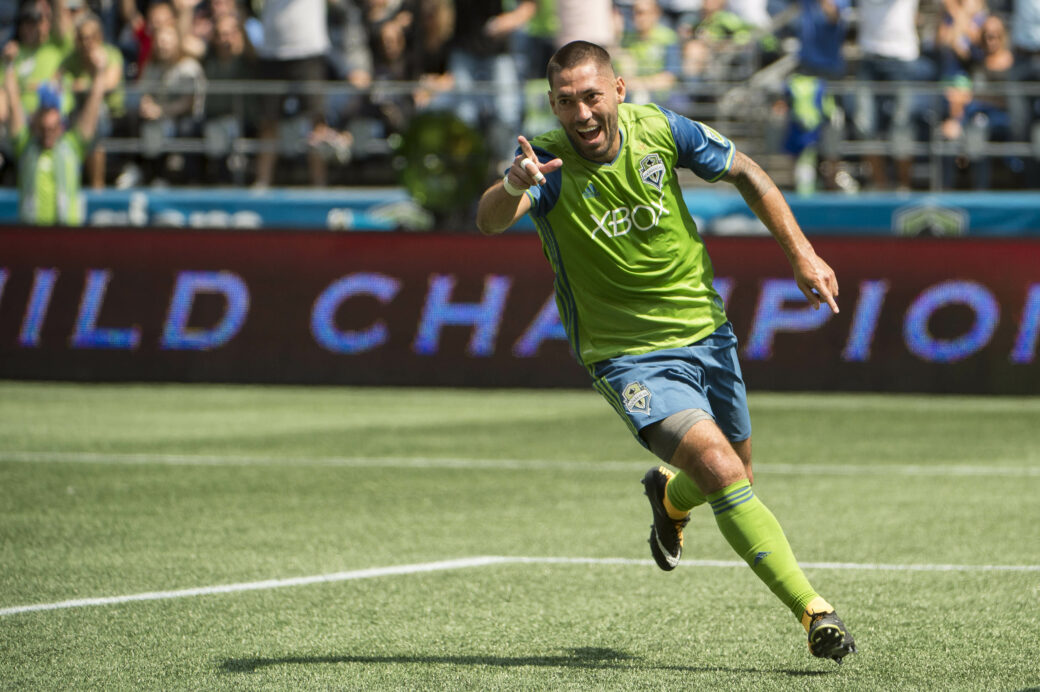 SEATTLE– For much of the spring and early summer, the defending champion Seattle Sounders found themselves looking up at the so-called red line as makeshift defenses struggled to keep the ball out of the net and the attack struggled to find chemistry.

But after Saturday afternoon’s 1-0 defeat of Sporting Kansas City in front of 43,530 at CenturyLink Field, the Sounders (10-7-7, 37 points) suddenly find themselves tied for first place in the Western Conference with 10 games to play.

Clint Dempsey scored the game’s lone goal in the 35th minute, sliding inside defender Saad Abdul-Salaam near the penalty spot to snap a header off the FieldTurf and past goalkeeper Tim Melia for his team-leading 10th goal of the season. Jordan Morris nabbed his first assist of the season on the play, whipping in a pinpoint cross that sailed over both Nicolas Lodeiro and Will Bruin before finding Dempsey for the goal. It was Dempsey’s 50th goal in all competitions for the Sounders, and his sixth goal in his last five MLS games.

Nicolas Lodeiro nearly doubled the lead moments later, but volleyed a deflected cross into the side-netting from 10 yards out.

While Sporting KC generally saw a good deal of the ball in the attacking in third, the visitors rarely threatened to equalize. Second-half substitute Latif Blessing created their first decent chance of the match just past the hour mark, finding space from close range but failing to beat goalkeeper Stefan Frei at the near post. In the 74th minute, James Musa found a deflected ball inside the penalty arc and one-touched a low, driven shot that forced Frei into a diving save.

That was as close as the visitors would come to equalizing.

The Sounders are 8-2-3 in their last 13 matches. They are undefeated in eight, have not lost since June 17, and have not lost at home since May 6. They pitched their fourth straight shutout on Saturday, and have now gone a club-record 400 minutes without allowing a goal.

For Sporting KC (9-5-10, 37 points), Saturday’s road trip was always going to be an uphill battle. With his club playing its third game in seven days, head coach Peter Vermes fielded a young, makeshift lineup that saw both Benny Feilhaber and Roger Espinoza start the match on the bench. Musa earned his first MLS start just 24 hours after signing with the first team from the club’s second-tier side. Only three players — Gerso Ferndandes, Jimmy Medranda, and U.S. international Matt Besler — started in Wednesday’s penalty-kick victory over the San Jose Earthquakes in the U.S. Open Cup semifinals.

Yet the visitors started the match well, controlling possession, gumming up the middle of the park, and generally making it difficult for the Sounders to build out of the back. Only a Chad Marshall header in the eighth minute seriously threatened Sporting KC until Dempsey’s goal, and only an 81st-minute cross from Joevin Jones to Cristian Roldan threatened to add an insurance goal.

Cristian Roldan. Credited with a second assist on the goal, the third-year midfielder once again controlled the heart of the field and delivered key plays on both sides of the ball.

He wasn’t called on often, but Stefan Frei delivered a quality save in the 61st minute to deny James Musa and preserve a win for the Sounders.

Saad Abdul-Salaam. Generally acquitted himself fairly well, but on the key play of the match found himself looking at Clint Dempsey’s back as the legendary U.S. international rose to score the game’s lone goal.