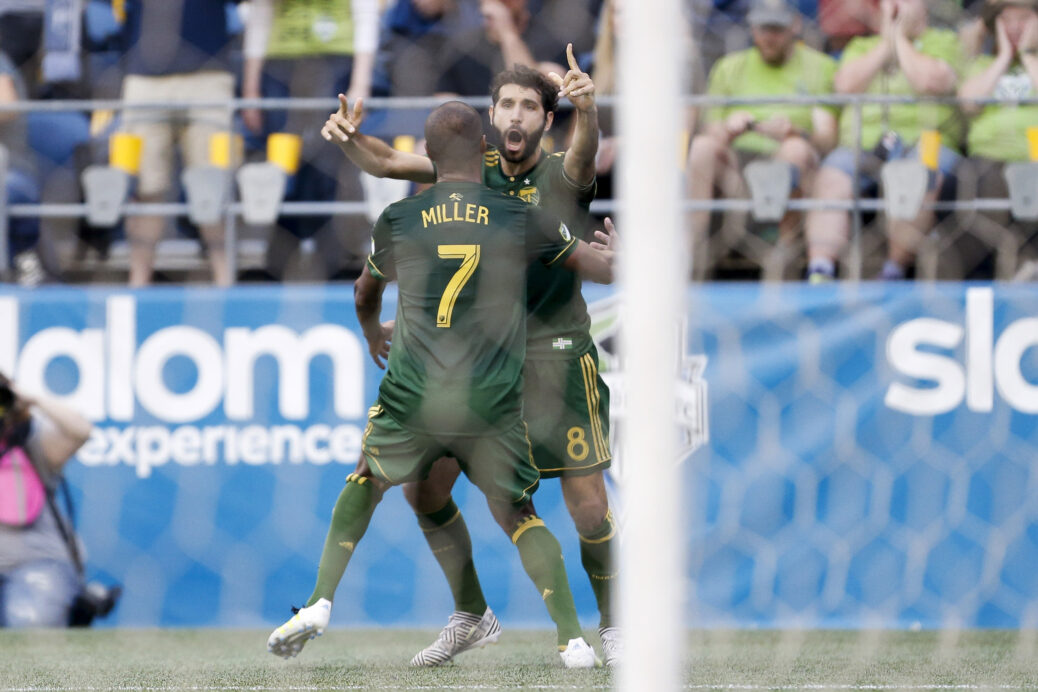 SEATTLE– In the 99th all-time meeting in a rivalry that has spanned myriad leagues and parts of five decades, the Portland Timbers escaped the Emerald City with a 1-1 draw against the Seattle Sounders in front of 51,797 at CenturyLink Field on Sunday night.

The result leaves the top of the Western Conference standings untouched, with the Sounders (11-7-9, 42 points) holding a slim edge over the Timbers (11-9-8, 41 points) for first place in the conference.

After falling behind early, Portland equalized through a Diego Valeri penalty kick in the second minute of first-half stoppage time. Referee Mark Geiger awarded the penalty for a Kelvin Leerdam tackle on Darren Mattocks as the Jamaican striker raced into the 6-yard box. Sounders goalkeeper Stefan Frei guessed correctly on the ensuing penalty kick, but Valeri buried a nearly unstoppable shot into the side netting.

Cristian Roldan opened the scoring in the 18th minute on an odd set-piece play. Nicolas Lodeiro sent in a corner kick that fell to center back Roman Torres just two yards in front of goal. Three times Torres nudged the ball toward the back of the net — first with a thigh, then twice with his shin — and three times Diego Chara cleared his line. But the third deflection floated to Roldan, who redirected the ball with his thigh before poking a shot off his lower leg, through a tangle of bodies, and past goalkeeper Jeff Attinella for the 1-0 lead. It was the sixth goal of the season for the blossoming young midfielder.

“I thought I could make a play and get closer,” said Roldan, “and it ricocheted off my shin and it went in, so I’m going to celebrate it.”

For Portland, the result is another high point in what has been a roller-coaster 2017, with two hot streaks bookending an expanse of mediocrity. Three straight wins by a combined score of 10-3 to start the season had many pegging the Timbers as early MLS Cup favorites, and they entered Sunday’s match having won four of their last six matches. In between, however, was a four month stretch that saw the Timbers post a meager 4-8-6 record from late March to the end of July. Sunday’s hard-earned road point suggests the Timbers may have permanently put a middling summer in the rearview mirror.

“What I liked most about it,” said Timbers head coach Caleb Porter, “is we came in and played aggressive. We pressed them and I think they had a tough time building out of the back in the first half. We were on the ball and we were the aggressor in the first half and that was the goal – to come in here and play on the road like we play at home, and I thought we did that. We’ll continue to play that way home and away. If we follow that formula and the guys execute like they did, we’re going to be a tough team to beat.”

The result was even more promising for the visitors given they took the field missing three key regulars: center back Liam Ridgewell, striker Fanendo Adi, and first-choice goalkeeper Jake Gleeson all sat with injuries picked up in early August. Adi’s absence was especially noteworthy — the 26-year-old Nigerian has not only provided the Timbers with 10 goals and three assists this season, but has nabbed a club-leading eight goals in just 10 career appearances against the Sounders.

Twice in the opening minutes of the second half Jordan Morris missed chances to regain the lead for the Sounders. In the 47th minute he broke free on a through-ball from Clint Dempsey, but drove a left-footed shot directly to a waiting Attinella. In the 56th minute Nicolas Lodeiro sprung Morris behind the Timbers’ back line but Attinella charged, smothering the second-year striker’s soft chip.

Seattle continued to mount pressure down the stretch, but could never muster more than half-chances against Portland’s disciplined and bunkered defense. The Timbers, though, did narrowly avoid some self-inflicted damage in the waning moments. Zarek Valentin appeared to get away with a handball in the penalty area in the 89th minute. Moments later Larrys Mabiala nearly scored an own goal, heading a clearance toward goal and forcing Attinella to push the ball over the crossbar for a corner kick.

The Sounders are still riding a club-record 11 match unbeaten streak, still sit in first place in the Western Conference, and have still never lost to Portland at CenturyLink Field in the regular season. But Sunday’s draw was the second disappointing result for the club in five days. Seattle put on perhaps its most impressive display of the season in Wednesday’s 1-1 draw with the Vancouver Whitecaps, but could never find an insurance goal after taking an early lead and gave up a late equalizer despite enjoying a man advantage.

“You’re playing your two archrivals,” said Schmetzer. “You have chances in Vancouver to put that game away and you have chances to put Portland away, and you don’t do it. I’m disappointed. I think, again, everybody in the locker room is disappointed.”

Looking forward, both teams are off next weekend due to the international break for World Cup qualifiers. The Timbers return to action on the road against NYCFC on Sept. 9, while the Sounders host the LA Galaxy on Sept. 10.

Diego Valeri. On the road in one of the league’s most intimidating venues, and Valeri delivered from the penalty spot for his 16th goal of the season, cool as a cucumber.

Jordan Morris. A rough night in a mostly disappointing sophomore campaign for the 22-year-old Stanford product. Twice had golden opportunities to bag a game-winner in the biggest rivalry in MLS, and twice failed to trouble the goalkeeper.