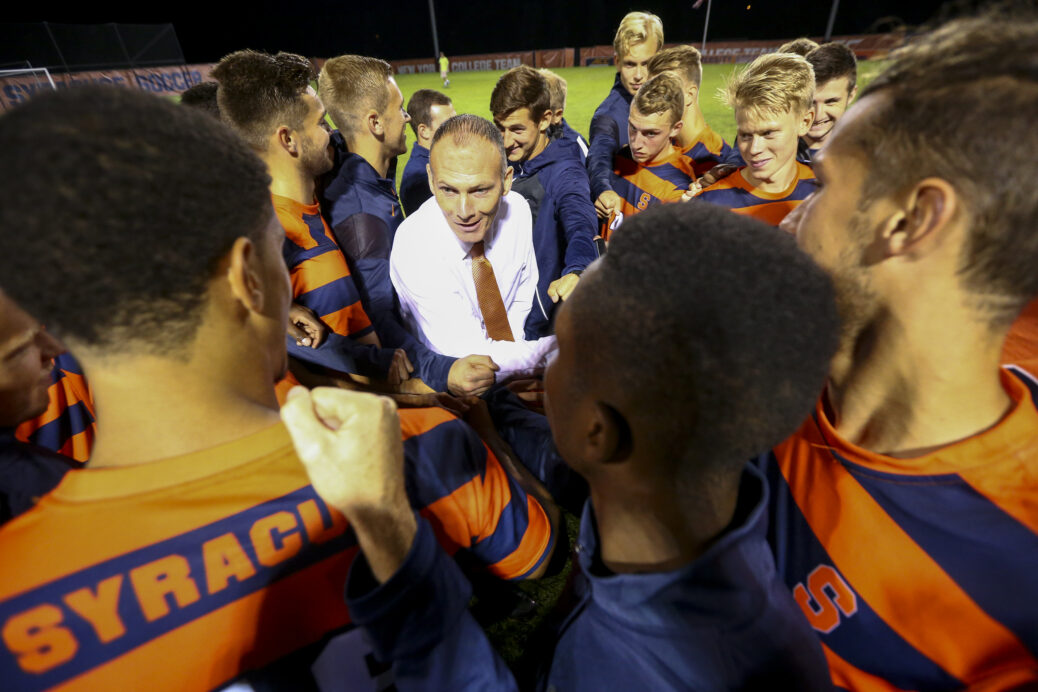 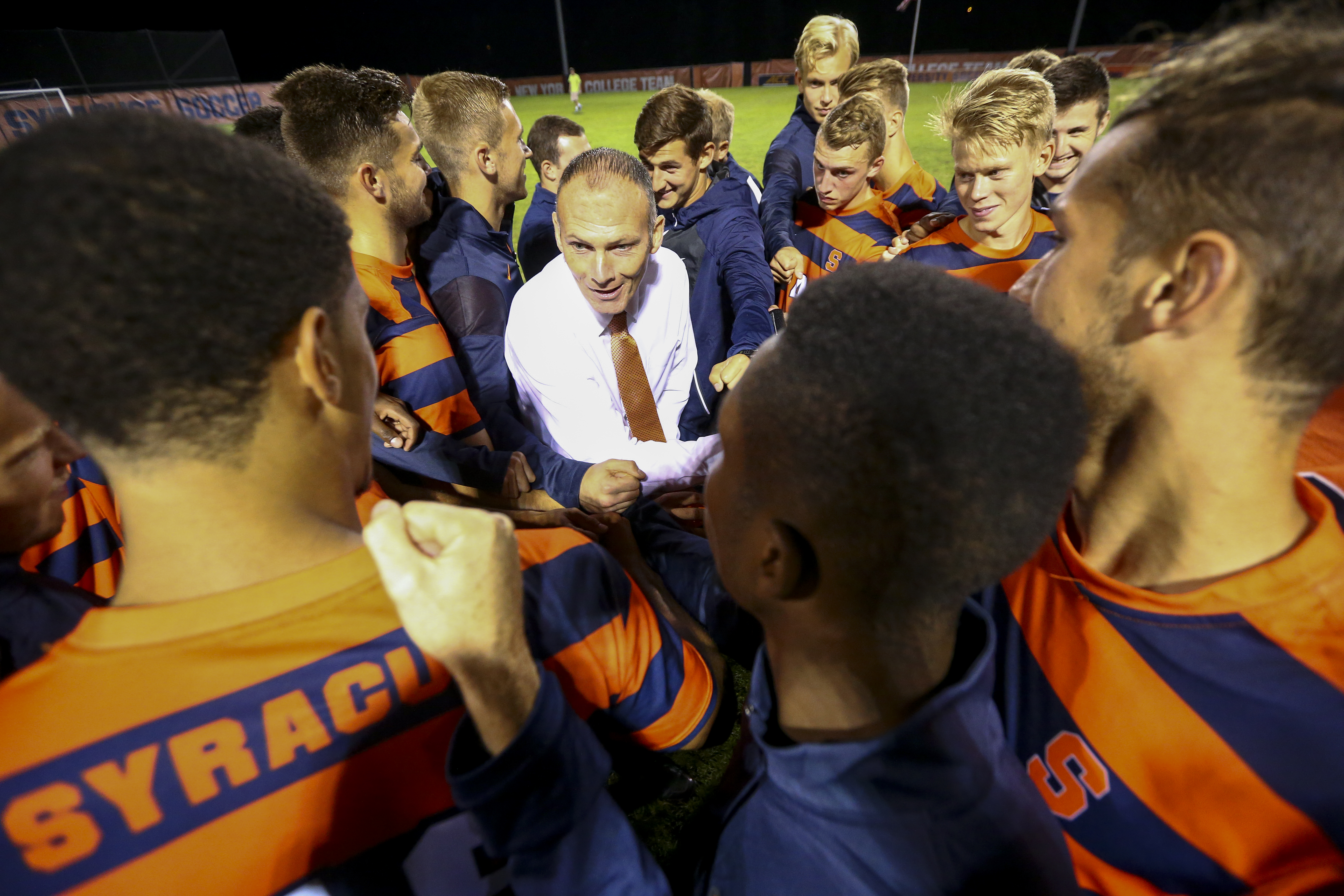 Every team in college soccer expects to lose key pieces from season to season. It’s just the nature of the college game. Players move on, graduate, turn pro. Continuity is far from guaranteed as programs are consistently rebuilt on the fly from year to year.

Over the past several seasons, Syracuse has been built into one the nation’s premier programs, reaching the third round of the NCAA tournament for three consecutive seasons. But with that success comes the rebuild, and the Orange’s will prove bigger than most.

Losing a total of five players to MLS would cripple almost any team, and Syracuse head coach Ian McIntyre admits the current group will face its share of early struggles as this team looks to forge its own identity with a new set of potential stars.

“There’s no easy answer to that,” McIntyre told SBI. “It’s replacing 22 year olds with 18 year olds. I think it’s important from a coaching perspective, from a fan’s perspective, to have a patience. It’s difficult for coaches, but it’s also about not lowering our standards at all. Every time our guys suit up and put on a jersey, there are high expectations and that hasn’t changed. We’ve got some important returning players and we’re sprinkling in some good younger players. There’s a terrific energy and enthusiasm.

“We’ll try and work out who we are here at Syracuse,” he added. “I think we’re a program that has talent and we have some important players. If they’re playing well, we have a chance to win some games. We’re going to find out about ourselves very quickly.”

The biggest tests will come in defense, where Cuse will have to replace one of last season’s biggest stars in Robinson. The young central defender was talented enough to earn a Generation Adidas deal before becoming the second overall selection in January’s draft. Defenders like Robinson don’t grow on trees, and Syracuse will need to replace a player that was as solid as they come at this level.

You can’t do that all in one go, and McIntyre says he’ll rely on a committee of veterans to ease the load. Chief among them will be Sophomore defensive midfielder Mo Adams, who was named one of the team’s captains ahead of the new season while being named to the preseason Hermann Trophy watchlist. Adams is a No.6 through and through, and his ability to shield the backline will be vital if Cuse is help nurture the new-look defense.

Joining Adams as co-captain is third-year starter Kamal Miller, who McIntyre says will be a vital leader both on and off the field. Junior goalkeeper Hendrik Hilpert, the team’s incumbent starter, is a year older and a year more experienced. Meanwhile, sophomore defender John-Austin Ricks  is expected to step up to a bigger role as is junior Jan Breitenmoser.

“We have some players who have experienced playing at this level, so I think the foundation is there with Kamal and Hendrick and Mo,” McIntyre said. “Mo is very important because he puts out a lot of fires. With a young defense, if he can do that, it alleviates the pressure on the defensive unit which prevents the ball from getting to Hendrick in-goal.”

“We’ve looked sharp,” Adams added. “There are a bunch of new players that are intending to start for us, and they’ll need to make an impact straight away. Things are looking good.”

On the attacking end, the Orange lose four of their top six goalscorers, including Nanco, who led a balanced attacking unit with seven finishes. Second-leading scorer Jonathan Hagman returns as does Johannes Pieles, who fired three goals and four assists in 14 starts during his freshman season.

The key, McIntyre says, will be depth. Pieles is expected to make a leap in his second season. Hugo Delhommelle is new to the squad and has looked “sharp”. Then there are freshman in Norway’s Petter Stangeland and high school All-American Tajon Buchanan that could make an impact.

“I think we have some pieces where it will take us a little bit of time to work out the right players to complement one another, but I do think we’ve got the ability to create chances,” McIntyre said. “Do we have a 15 goal a season guy there? I’m not sure, but I think we have some guys that can find the back of the net for us.”

In the gauntlet that is the ACC, they’ll have to. Wake Forest is as talented as any team in the country. North Carolina and Clemson are right there as well. Louisville and Notre Dame are perennial powerhouses. The ACC is not a conference where you can weasel by during a down year. It’s a conference that McIntyre believes is “wonderful, but brutal”.

The Orange will face bumps, sure. The schedule is too unforgiving and there are too many pieces to integrate. But, when all is said and done, McIntyre is looking for his team to put itself in position to succeed when it really counts: the conference and NCAA tournaments.

“It’s important that we develop our own identity,” McIntyre said. “Some of our older guys can take experience and confidence from playing Clemson on the road or playing Wake Forest or the Louisvilles or the UNCs. We take confidence from that. But what excites me is looking forward to this new group going into battle and learning a lot about themselves.

“We’re going to have some highs and we’re going to face some adversity, like all teams,” he added. “My goals for this group aren’t any different that the Syracuse team last year. We’ll be battle tested by the time the end of the season rolls around.”