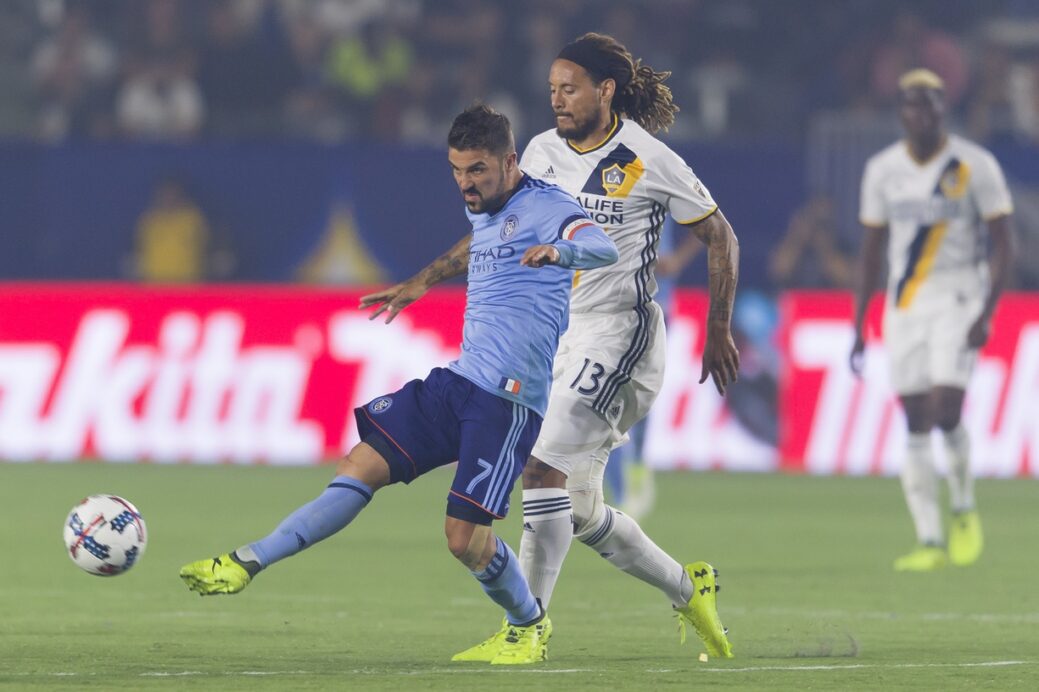 The LA Galaxy’s home issues continued while NYCFC continued their ascent up the Eastern Conference table.

Goals from David Villa and Jonathan Lewis led NYCFC to a 2-0 win on Saturday at StubHub Center. The win is NYCFC’s third in four matches while the Galaxy have not won a home game since an April 7 win over the Montreal Impact. The loss also extends the Galaxy’s overall winless run to eight with just one draw in that span.

It took until the 54th minute for NYCFC to open the scoring, and the opener came in spectacular fashion. Lewis cut inside and rocketed a right-footed shot, and the rookie winger’s effort smashed off the crossbar and over the line, giving NYCFC the 1-0 lead early on in the second half.

Villa’s goal came 19 minutes later, providing valuable insurance. It was a finish very similar to Lewis’, as Villa cut in from the opposite side and curled in a long-range finish to double the lead and all but seal all three points for NYCFC.

The Galaxy did have their chances, as they forced Sean Johnson into five saves compared to Brian Rowe’s one. None of Johnson’s saves were simple, starting with an early fingertip save on a deflection. His best stop may have come just moments after Villa’s goal as Johnson got a hand to a close-range Jack McInerney header.

He was beaten once, though, but not for a goal. In the 26th minute, Ashley Cole’s volley seemed goal-bound but it smashed off the crossbar as the Galaxy couldn’t fully get back into the match.

With the win, NYCFC climb within four points of Toronto FC while the Galaxy remain a whopping nine points out of a playoff spot.

NYCFC hosts the New England Revolution next Sunday while the Galaxy has 11 days off before facing the Columbus Crew on Aug. 23.

David Villa’s insurance goal all but put the game to bed despite the fact that the Galaxy were certainly the more aggressive team.

Gyasi Zardes didn’t make enough of an impact from the striker position, and his struggles doomed the Galaxy to defeat.