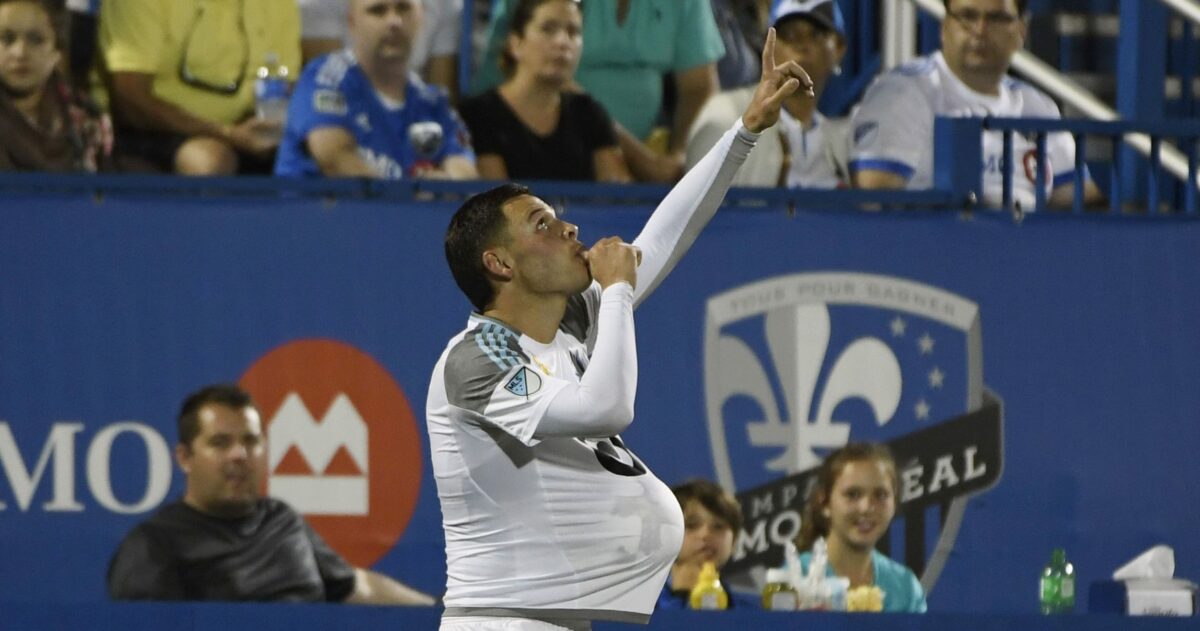 Superman is back, and he’s is expecting a Superkid.

With his first start since his injury back in July, Christian Ramirez kept the secret that his wife was expecting a child until his first goal. After scoring the Loons’ second equalizer of the game at the 60th minute, Ramirez grabbed a ball and put it under his shirt announcing the good news. A celebration that he was looking to show his teammates for a little bit.

“We’ve been waiting for [this celebration]. I was hoping it would be at home, I didn’t know if I’d get the start tonight because of my injury six, seven weeks ago but I felt good while I was out there,” said Ramirez.

This came as a surprise for everyone on the field and on the sidelines. No one on the team knew about it.

“It’s the first time I knew about it. I thought: ‘Maybe she’s pregnant,’” said Minnesota head coach Adrian Heath. “He’s been injured for the past five-six weeks with a hamstring so for him to come back, start, play the way he did and score, really pleased for him.”

Abu Danladi didn’t get the gist of Ramirez’s celebration from the sidelines but was very happy for his teammate, one he looks up to and learns from as a rookie in the league.

“I definitely didn’t know that but now that I know it makes it worth it,” Danladi said. “He’s an incredible guy off the field and on the field, everybody knows his ability to score goals and he’s good on the ball.”

The first overall pick in the 2017 MLS Superdraft returned to the bench after spending the last stretch of game replacing the injured Ramirez, but Danladi managed to find a goal coming of the bench. He now holds Minnesota United’s two game-winning road goals in the team’s MLS era after scoring in win against the Impact and the Chicago Fire.

“Abu has been playing really well in the last five weeks and credit to him to finish off that goal,” said Christian Ramirez. “I think it’s his best of his rookie year so far, hats off to him he came on and did a perfect job.”

Heath also spoke kindly of his rookie player, emphasizing his presence on both sides of the ball.

“He’s getting better. He’s getting the importance of getting a hold of the ball, not flicking it and losing it,” said Heath. “Looks clever, starting to defend from the front a lot better and the kid looks dangerous. He looked dangerous tonight when he came on.”

Danladi did not shy away from saying that his first season was “a learning process.” But on the subject of shaking off the pressure of being the top pick in January’s MLS Draft, Danladi stated that fitting with his new team and new city was the most important.

“I think that just me being able to settle in the team, being able to play with those guys, that was my main concern,’ said Danladi. “[But] it’s really really nice, Minneapolis is a great city, I really love it so it’s just been great. Pretty much just integrating the whole MLS and professional life and it’s been great.”

With a second win on the road, Minnesota United is looking to give its fans positive results nearing the end of the season. Already out of the playoffs, the Loons’ comeback win against the Impact after rough midweek travel across Canada from Vancouver shows tenacity away from home.

“It was a big win for us because, obviously when you’re in Vancouver on a late Wednesday night, you’ve got to travel the full width of the country and we had a time delay and all that sort of stuff. Hey, I’m really really pleased for the players,” Heath said.

Heading into the last six games of the regular season, Heath wants his team to know that they have everything to play for. Through those last six games, the Loons head coach will be taking a lot of notes on player performance going into the team’s sophomore MLS season.

“We need to treat every game like it’s a cup final,” said Heath. “The players in that dressing room, every single one of the have something to play for and between now and the end of the season, it will give me a big indication of where we are and what we need for next year.”