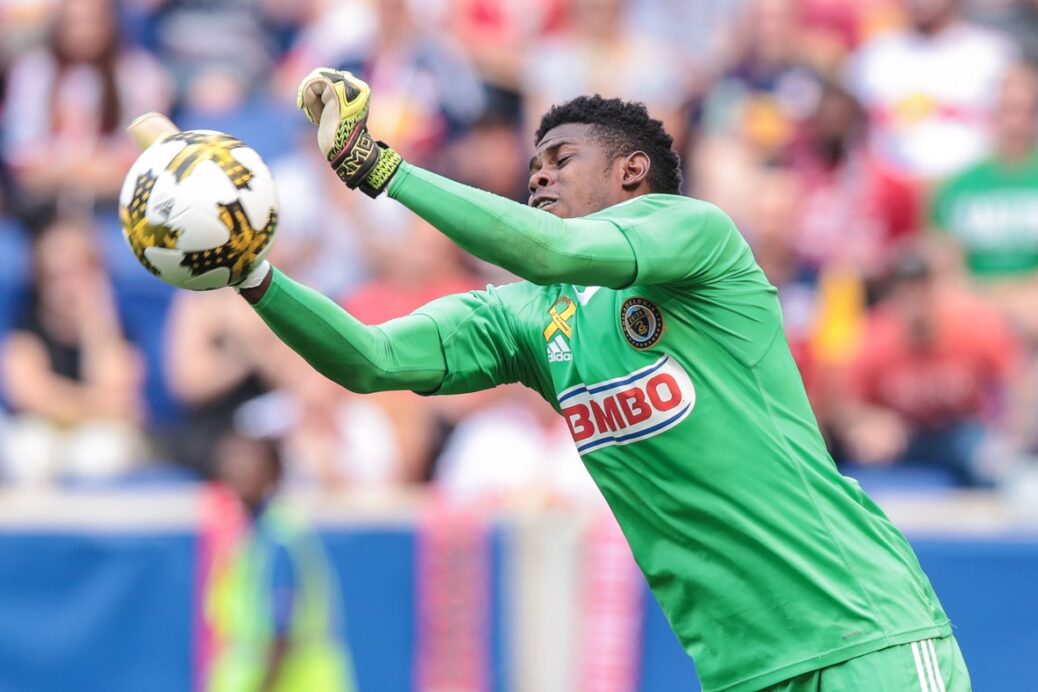 CHESTER, PA– Andre Blake has been looked at as the most valuable piece on the Philadelphia Union roster for quite some time.

Not only is Blake valuable on the field for the Union, earning the 2016 MLS Goalkeeper of the Year award, he has also been in the discussion of what a transfer fee may yield to help the club develop further.

Although there’s been recent interest in the Jamaican goalkeeper from two Premier League clubs, according to a recent Goal.com report, the club has officially received no concrete offers for the standout shotstopper.

“First of all there has been no offer so it’s kind of hard to comment on that,” Union sporting director Earnie Stewart said. “The other side is yeah it happens a lot. There’s a lot of rumors out there and that there’s a thought about players moving. In this case, it’s not the case.

“I can only look at how we view Dre and I think Dre is an important part of our group,” Stewart said. “As long as I’ve been here, he’s been tremendous. I can’t look into other clubs’ philosophy and the way they go about their transfers. We’re very happy with Dre and we’d love to keep him here longer.”

Union manager Jim Curtin was aware of the potential interest from England and the connection Stewart had to former Crystal Palace boss Frank de Boer, who has since been sacked. Curtin shares the same representation with Blake.

“The most recent I heard of it was two weeks ago when I was speaking with my agent,” Curtin said. “It came off as a casual mention, and this was after the transfer window was closed, so it was the first time I heard of clubs and numbers. It was just a sentence and he said, ‘Interesting that you haven’t heard anything’ and we moved on. Nothing happened and it seems strange that he couldn’t move anyway so it’s kind of a nothing.”

The Blake situation is a precarious one, especially with the strict work permit rules in the UK that limit Blake’s options since Jamaica is outside of the top 50 in the FIFA world ranking.

It’s also a tricky situation for the Union because there are some fans who believe the front office isn’t telling the truth about possible Blake offers. That mistrust dates back to the Nick Sakiewicz era and has nothing to do with how Stewart’s current regime has handled transfers. Stewart even noted himself that he’d be open about offers as long as one was received.

“If you really want to sell somebody and you want to get the most out of it, I’d say you put it out there in the open,” Stewart said. “Once again, I can only look in my e-mail box and my telephone and the fax of the club. That hasn’t happened.”

Curtin also chimed in on that specific topic, also noting that he’d be more than willing to share news about an offer.

“It’s just talk and something I can’t really speak about because there’s nothing concrete,” Curtin said. “People are trying to piece together a timeline like we’re being deceptive in this situation and in my 17 years of professional soccer I can’t think of benefit of us lying in this case.It bothers me in terms of integrity. I can sit up here and take bullets for different things and certain decisions that are made, but to accuse or mention that we’re withholding something is a different story.”

Keeping Blake in Philadelphia and building around him isn’t out of the picture. Although it’s rare in MLS, Blake could end up being one of the highest-paid players on his team as a goalkeeper if all parties agree to a new deal.

It’s possible keeping Blake is the best option for the Union, especially if a further infusion of allocation money comes into the club as well as more willingness from owner Jay Sugarman to spend on transfer fees.

“To get good players, you have to go out and spend money because good players are never free,” Stewart said. “But apart from that, you don’t want to get into things like budgets or anything like that, because then the expectations go to a standard that might not reach us. Like I said in the past, we’re not going to be a team that goes out and spends $10 million on a player. That’s not going to be the case. But we do think that with the work that we’ve done now in these two years almost is good to get some really good players.”

As for Blake himself, he has a team option at the end of his current rookie contract for 2018 and has been in light discussions with the club about a new deal. It wouldn’t be out of the realm of possibility for Blake to stay in MLS for the long term and be a cornerstone of the franchise.

“I can say that we want to keep Dre here,” Stewart said. “I think that’s very fair to say and those talks have been lightly going on now for quite some time.”

“If you’re talking about guys we want to be about to be a part of this thing and who deserves to stay around, he’d be a guy we’re certainly very happy with,” Curtin said.