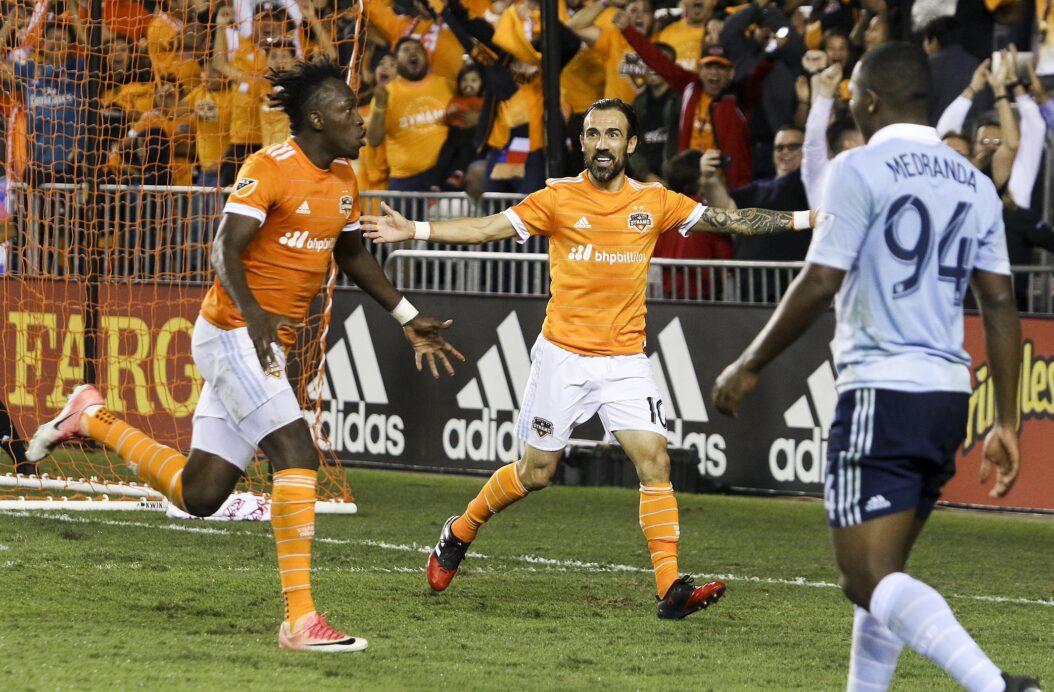 For the Houston Dynamo, 2017 has been a season of resurgence under head coach Wilmer Cabrera.

The former coach of Chivas USA and the USL’s Rio Grande Valley Toros, helped the Dynamo improve from a last-place finish in 2016 to a fourth-place finish this season.

However, Houston has shown a Jekyll and Hyde character when it has come to playing at BBVA Compass Stadium and on the road. Forty of their 50 points in the regular season came at home, which was the best in the Western Conference.

Cabrera’s side continued its strong home form on Thursday evening, defeating Sporting Kansas City 1-0 in the second of the Western Conference’s knockout round matches. The victory sets up the Dynamo with a date against the top-seeded Portland Timbers, starting with a home first leg on Monday evening.

The match went 120 minutes, and it took 94 minutes for either side to find the breakthrough. A darting run down the right flank by second-half substitute Vicente Sanchez gave the Dynamo a great look offensively. Sanchez outpaced Sporting KC’s Jimmy Medranda, and kept the ball from going out of bounds.

The 37-year-old slotted the pass to Alberth Elis inside of the six-yard box, who rifled home what proved to be the winner. It was Elis’ 11th goal of the season and it clinched the Dynamo a playoff spot for the first time in three years.

“I am not surprised about Sánchez because that’s why I brought him. I invited him to be a part of this project. I am not surprised,” Cabrera said. “He’s unbelievably talented, smart, and he has an unbelievable quality. He’s sad because he couldn’t score those goals and those opportunities, but what he brought throughout the 55 minutes, the extra time, and the five more minutes during the end of the game, it was outstanding.”

After a sluggish first-half, Sporting KC showed more life in the second half. Despite losing Gerso Fernandes to an injury before the hour mark, Peter Vermes’ side had five shots on goal and truly fought until the end for an equalizer.

Dynamo keeper Tyler Deric made six saves in the clean sheet, but knows the Timbers pose a different challenge than Sporting KC.

“They have a lot of attacking weapons. They are very quick, and very good,” Deric said. “We have to be prepared this week for the game on Monday and it is going to be another tough game for us, but if we stay calm, composed and ready to put in the work, I know the guys are ready to do that. I’m really excited for Monday.”

The Dynamo had a chance to add insurance with the final kick of the ball, which came from the penalty spot. In a foot race with Sporting KC keeper Andrew Dykstra, Sanchez was bundled over and given the chance to extend the score to 2-0.

Dykstra palmed the effort away from going into the bottom-left corner, but the Dynamo remained the victors. Even with the win, the Uruguayan knows the hard work needs to continue to make a real run at things.

“The key is to work hard. I think Sporting Kansas City was a tough opponent, they did well during the regular season, just like Portland has. There are no weak opponents anymore; all games are to be played like a final,” Sanchez said. “In soccer, you have to play all the games and during playoffs a whole new season starts. It’s not like regular season anymore. It’s going to be tough, we have to prepare mentally and give our all on Monday.”