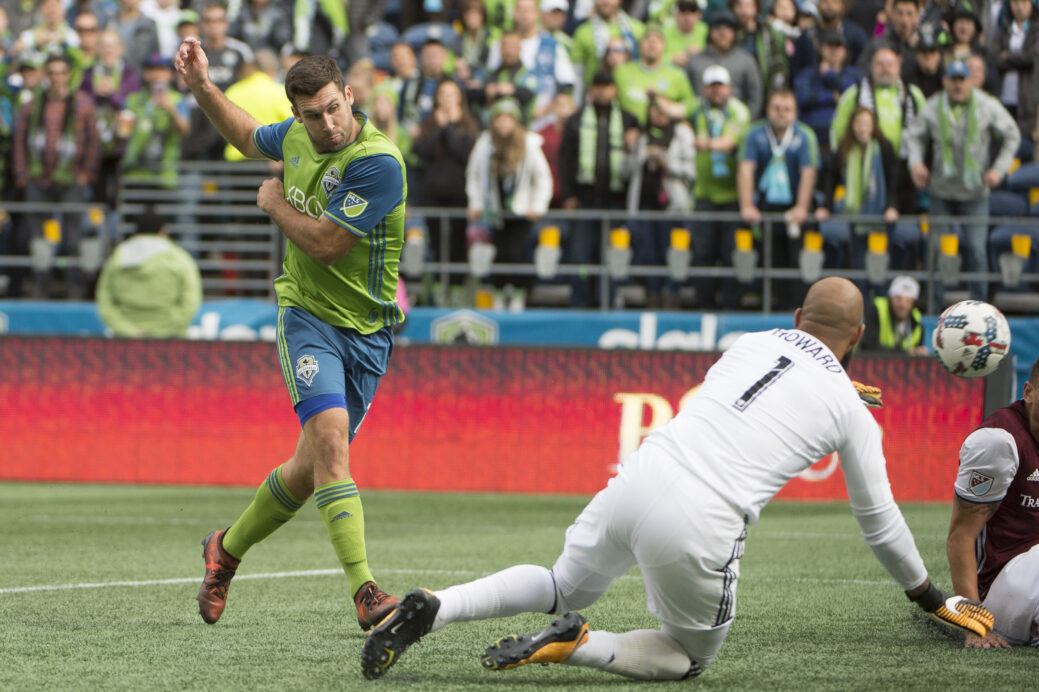 SEATTLE — Well then. Up and down, and back up again: as went much of the year, so went the final regular season match of 2017 for the defending champion Seattle Sounders, game and season a pair of roller-coaster rides jointly ending on a marked high note.

Facing a mightily struggling opponent in the visiting Colorado Rapids, the Sounders posted a 3-0 win in front of 44,370 on Sunday afternoon to finish the season in second place in the Western Conference and earn themselves a first-round bye in the 2017 MLS Cup playoffs.

The win came at a high price, however. Clint Dempsey was ejected midway through the first half, receiving a straight red card that will cost him at least the first match of the playoffs if it is not successfully appealed.

The Sounders (14-9-11, 53 points) finish the season tied with the Portland Timbers for the best record in the Western Conference. The Timbers, however, earned the first seed by virtue of winning one more game than the Sounders during the regular season.

Seattle also finishes the regular season having won three of its last four matches, outscoring opponents 10-0 in the three wins.

The Sounders punched their ticket to the second round in a strange match that saw the referee at the heart of everything. Chris Penso called 28 fouls, issued seven yellow cards, two red cards, and awarded a pair of penalties. Seattle played a man down for 40 minutes before Penso ejected a Rapids player as well.

Seattle opened the match on the front foot and scored in just the ninth minute. Dempsey found midseason acquisition Kelvin Leerdam streaking unmarked into the penalty area after Bismark Boateng committed a careless midfield turnover. Leerdam then enjoyed ample time to pick out Will Bruin inside the keeper’s box for a simple volley and the 1-0 lead.

It was Bruin’s 11th goal of the campaign, and his third in the last two matches. It was also Leerdam’s second assist of the season.

“Kelvin had a tremendous performance today [with] his ability to get to the end line, and then also to have a little bit of patience down there,” said Sounders head coach Brian Schmetzer. “Because he was kind of waiting, waiting, waiting for the right pass. He makes a pass and Bruin puts it in. That goal was a quality goal, and I think that is just a bunch of good soccer players making some good plays.”

Dempsey and Bruin nearly teamed up for a second goal less than five minutes later, but Bruin hit the post after tracking down Dempsey’s through ball behind the defense. The Sounders seemed poised to run the Rapids off the pitch, outshooting the visitors 7-1 in the early going. But Dempsey’s ejection at least temporarily changed the tone of the match.

Penso issued the 24th-minute red card after employing video replay to determine Dempsey elbowed defender Mike da Fonte in the face. Dempsey then appeared to sarcastically applaud either or both Penso and da Fonte before jawing nose-to-nose with da Fonte.

Colorado, however, could not capitalize on the advantage, failing to convert a pair of golden opportunities before seeing a player of their own red-carded midway through the second half.

Stefan Aigner first missed a chance to equalize five minutes from half, slipping behind Seattle’s back line and chesting down a ball over the top just outside the 6-yard box. But the German midfielder rushed a bicycle kick, sending a shot directly to waiting goalkeeper Stefan Frei. It was one of just two shots the Rapids mustered over the first 45 minutes.

Colorado striker Dominic Badji then hit the post on a 53rd-minute penalty kick after Penso whistled Harry Shipp for a handball in the penalty area.

“I honestly didn’t see the ball until it hit my hand,” said Shipp. “That’s what I tried to tell the ref.”

Penso awarded the Sounders a penalty kick of their own in the 63rd minute, issuing defender Alex Sjoberg a straight red card for bringing down Bruin as the forward tracked down a cross in the penalty area. Penso initially issued a yellow before reviewing the play and determining the defender denied the Sounders an obvious goal-scoring opportunity.

“We miss the penalty there and they come down and get a penalty,” said Rapids defender Bobby Burling. “That is the game in a nutshell.”

The Sounders poured on the pressure down the stretch, and Lodeiro added a third and final goal late in stoppage time, gathering a deflected 50-50 ball before easily besting Howard from 15 yards out.

For the Rapids (9-19-6, 33 points), the loss caps a terrifically disappointing campaign. A year after finishing with the second-best record in Major League Soccer, they finish the 2017 season with the second-worst record in the Western Conference and the third-worst record in the entire league. A team that earned its stripes last season by building a fortress in its own half of the field frequently looked disjointed and lost in both midfield and defense, and never found any offensive prowess.

Nicolas Lodeiro. The Sounders never did go out and sign a third big-name designated player. Jordan Morris was not on the field on Sunday, and Dempsey was on the pitch for less than 30 minutes. But there was Lodeiro, looking ever more like his dazzling 2016 self, relentless throughout and earning a brace on the eve of the playoffs.

Sjoberg’s red card.  Once they enjoyed a man advantage, the Rapids seemed capable of staying in the match. At least until Penso leveled the playing field.

This one chooses itself: Clint Dempsey.