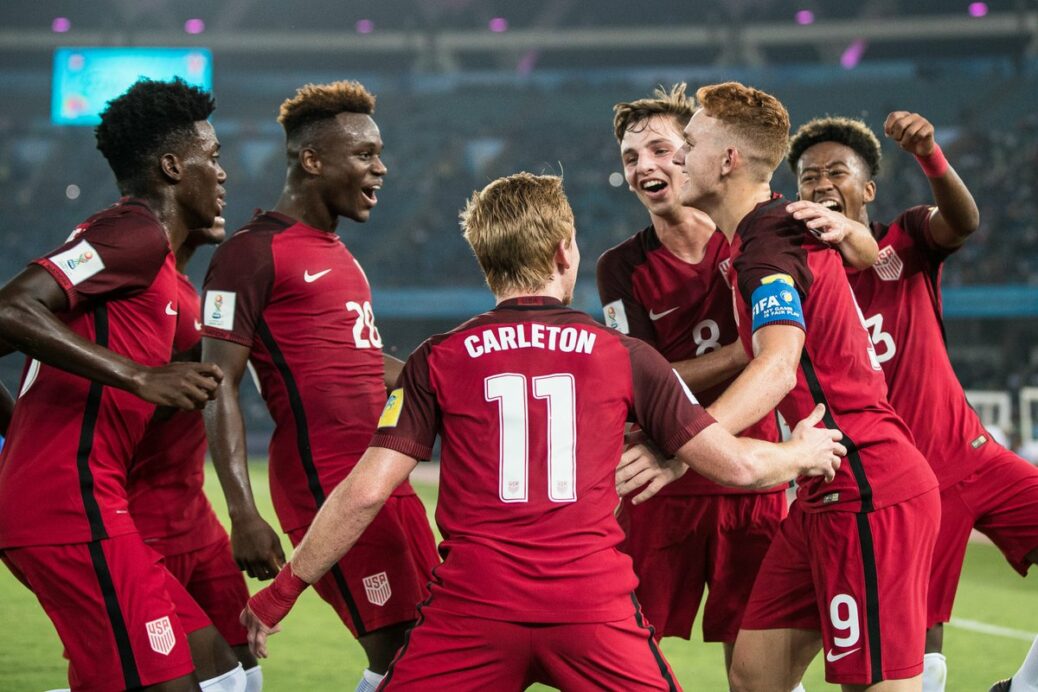 The U.S. Under-17 Men’s National Team put together a virtually flawless performance on Monday to seal a spot in the U-17 World Cup quarterfinals. On Saturday, they’ll need something similar to take down one of the top teams in the tournament.

After dispatching Paraguay, 5-0, the U.S. is set to take on England in Saturday’s U-17 World Cup quarterfinal. Monday’s win over Paraguay was the U.S. U-17’s second-ever knockout round win, pushing the team just two wins away from a tournament final.

In their way, though, is a very talented England team that will have a point to prove following a difficult match of their own. The Three Lions cruised through group play, but was held scoreless in an eventual 5-3 penalty kick win over underdog Japan.

“It’s back to work. We’re not done yet,” said U.S. head coach John Hackworth. “We have loftier goals. We plan to be here for awhile longer. That means our next opponent is everything and they’re standing in our way… We’re going to prepare to the best of our abilities and be ready for them.”

The U.S. and England are the only two countries to make the quarterfinal round of both the U-17 and U-20 World Cups this year with England emerging victorious at the latter earlier this year.

This U.S. U-17 team, though, is riding an incredible wave following the battering of Paraguay. It was a game headlined by Timothy Weah’s heroics, as the forward fired three goals to go with one apiece from Andrew Carleton and Josh Sargent. In total, it was an incredible attacking performance, one highlighted by Carleton’s play-making and Weah’s finishing.

“I feel this team is very determined. When there’s a job that needs to get done, we do it,” Weah said. “Facing a tough Paraguay team that really hit their opponents real good in the group stages, we just said we had to do this for our country and for ourselves. Coming off of a bizarre game against Colombia, we stepped up to the plate and got the job done. It’s about courage and getting the job done for the badge and that’s the most important thing.

“Hopefully, we can do the same in the quarterfinals, semifinals and finals, if we make it there.”

While Ayo Akinola’s injury issues could hurt the U.S. a major way, the absence of Chris Goslin could be the biggest loss. The midfielder was spectacular in the Paraguay game, bossing play from the midfield. However, he will miss Saturday’s match due to card accumulation.

That puts even more pressure on a U.S. defense as well as his likely replacement in George Acosta. The U.S. defense, led by NYCFC’s James Sands, stepped up against Paraguay, but England has some tough players of its own.

Unfortunately for England, Borussia Dortmund winger Jadon Sancho has left the squad and returned to his club. Sancho was the team’s leading scorer with three goals, while Angel Gomes and Danny Loader have fired two goals apiece.

On the other end, Sargent is likely the key if the U.S. is to truly go on a deep run. The forward was held realtively quiet through the group stage after sealing the Golden Boot and qualifying before dominating on the U-20 level at this summer’s World Cup. While his ability to hold up play and create has been a welcome addition, Sargent will be relied upon heavily to score goals going forward, especially if the injury to Akinola keeps the talented forward out of action.

“I’ve been trying to score goals throughout the tournament, but it hasn’t been my main objective,” Sargent said. “I’m just trying to help the team win. It’s a huge weight off my shoulders to score that goal.

“It’s a new game and a new focus,” he added. “We have to start focusing on (Saturday).”

Saturday presents the U.S. with a big opportunity. In addition to competing for a spot in the tournament’s final four, this current group of U-17s can also join some illustrious company with a win.

On Saturday, the U.S. can seal a semifinal berth for the first time since the 1999 group led by Landon Donovan and DaMarcus Beasley. Knowing that, the U.S. is confident, especially as they look to build on the team’s best effort of the cycle.

“It’s a quarterfinal coming up, and each game gets bigger and bigger,” said Carelton. “We need to turn our focus to that and leave (the Paraguay game) in the past.

“Keep it very simple, keep it very professional and just take what we did (against Paraguay) into the next game,” added Weah. “I think we’ll be successful.”