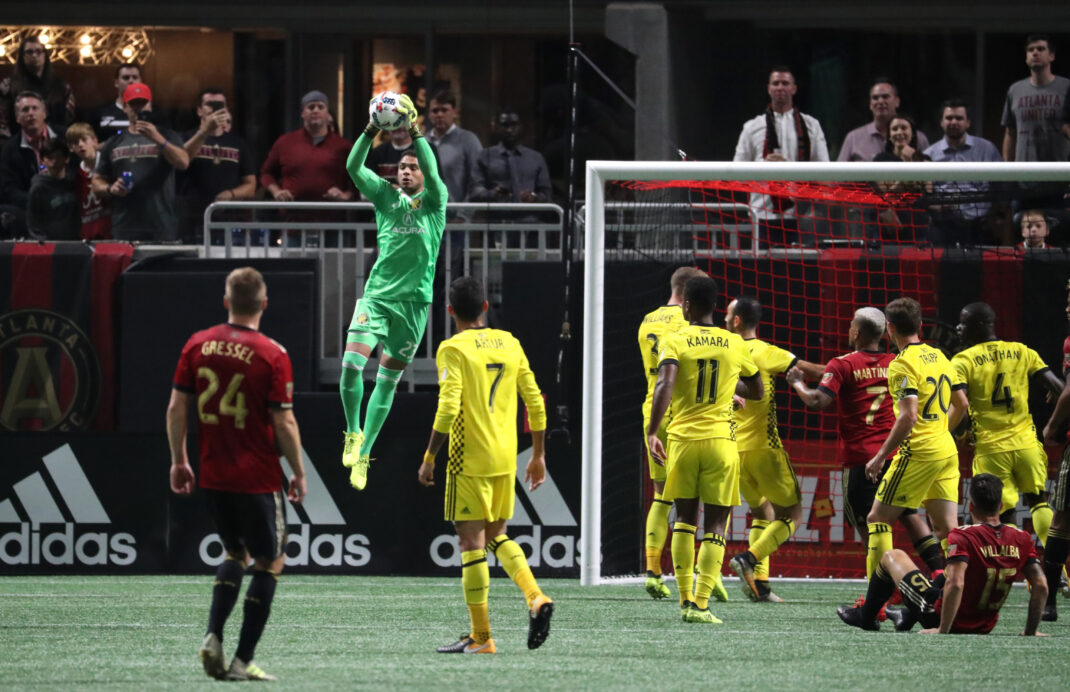 It was a game that had everything but goals but, when the dust cleared and the last penalty kick hit the back of the net, it was Columbus Crew that emerged from a certified playoff classic thanks to their young goalkeeper.

Zack Steffen starred in a penalty kick shootout win as the Crew toppled Atlanta United, 3-1, in penalty kicks following a thrilling scoreless draw. As a result, the Crew move on to face NYCFC in the next round of the postseason.

Julian Gressel was up first for Atlanta, and the Rookie of the Year favorite’s shot was parried away by Zack Steffen. Federico Higuain chipped Brad Guzan, giving the Crew an early advantage. Steffen then saved Leandro Gonzalez Pires’ shot before Kekuta Manneh’s shot was stopped by Guzan.

The two teams exchanged makes on the next sequence before Jeff Larentowicz shot caromed back out off the post. Adam Jahn stepped up and sealed the win, scoring to send the Crew through to the next round.

The first half was loaded with chances but no goals. Miguel Almiron came closest as his shot caromed off the post while Brad Guzan was forced into a big save in the 32nd minute as he kept out a one-on-one chance from Pedro Santos.

However, the best chance was one that wasn’t registered as a shot at all. On a ball in from Federico Higuain, Pedro Santos was played in on goal before he teed up Ola Kamara for a tap-in into the back of the net. However, the referee incorrectly ruled Santos offside and the whistle was blown before the finish, making it an unreviewable play, unfortunately for the Crew.

The second half saw Steffen make his best save of the day on a diving stop to rob Leandro Gonzalez Pirez on a headed attempt in the 65th minute. Just moments later, Kekuta Manneh rocketed a shot off the bar before Santos missed the rebound, squandering the chance.

In the 72nd minute, the post struck again. On a chance from inside the six, Josef Martinez rocketed a shot off the post. A rebound chance fell to Anton Walkes in the 83rd minute, but the young English defender’s shot went just wide. Then, in stoppage time, Steffen provided another massive save on Hector Villalba, forcing extra time.

The first chance of extra time fell to Higuain in the 102nd minute, but the flicked header went right at Guzan. Then, the crossbar struck again in the 105th minute on a shot from Harrison Afful.

With just moments remaining, Guzan was finally beaten on a headed attempt, but former Crew defender Michael Parkurst got back in time for a goalline clearance to save the match.

The Crew move on to face NYCFC at home to kickstart the conference semifinals.

Zack Steffen was outstanding throughout the match in a performance that solidified his status as one of the best in MLS and one of the brightest goalkeepers in the USMNT pool. When all was said and done, Steffen finished with eight saves and two additional stops in the shootout.

Michael Parkhurst wasn’t fully fit for Thursday’s match, but he came up huge with just seconds remaining in extra time to clear Harrison Afful’s shot off the line.

None. It was a match that won’t be forgotten anytime soon due to the sheer number of chances and big plays on both sides of the ball.