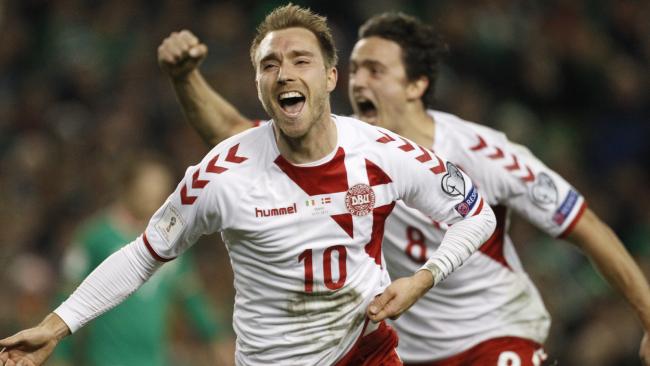 After being frustrated in a first-leg scoreless draw against the Republic of Ireland on Saturday, Denmark knew a better performance was needed to claim a World Cup berth.

Christian Eriksen led the way with a hat-trick on Tuesday as the Danes steamrolled Ireland, 5-1 at Aviva Stadium to book a spot in the 2018 tournament.

However, the hosts had the early edge as Shane Duffy headed home from a set-piece situation after six minutes. Just before the half-hour mark, things turned in Denmark’s favor.

An own-goal off of Irish defender Cyrus Christie leveled the score at 1-1 in the 29th-minute, before Eriksen’s right-footed effort three minutes later put the visitors ahead.

The Tottenham midfielder extended the lead to 3-1 after 63 minutes as his left-footed blast from long-range beat Darren Randolph to the bottom left corner. Eriksen finished his hat trick in the 73rd-minute as he slotted home Denmark’s fourth of the day.

Nicklas Bendtner capped off a perfect day for the Danes, scoring from the penalty spot in stoppage time. Ireland who held on in the first leg in Copenhagen on Saturday, failed to do much offensively creating two shots on goal.

Randolph made four saves in the loss for the Republic, who saw their World Cup hopes blown away.

Denmark, ranked 19th in the FIFA rankings, will make their fourth World Cup appearance, and their first since 2010.