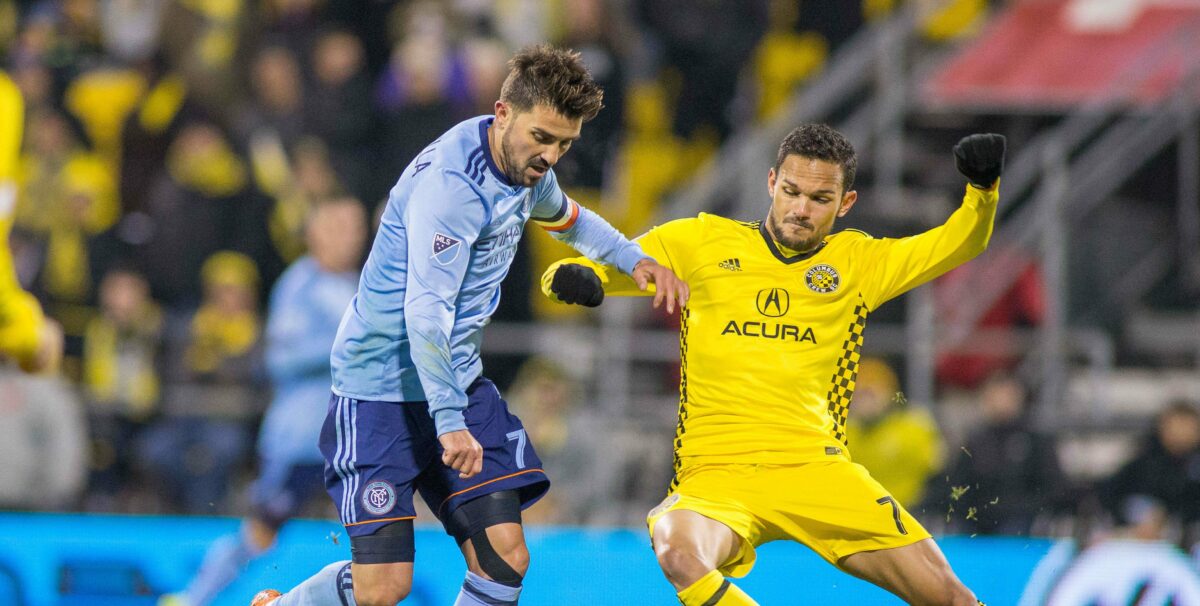 Heading into the postseason, the big focus for NYCFC was to avoid the failures of last season. Their postseason debut, a 2016 clash with Toronto FC, was over in the blink of an eye thanks to naive defending and a vicious attack. It ended 7-0 on aggregate and, at times, it didn’t even feel that close.

Somehow, someway, Tuesday night’s effort against the Columbus Crew may have been worse.

For a majority of the first half, NYCFC was in the match, creating chance after chance but squandering each and every one. Heading into the half, they were down 1-0, but still very much alive.

Then the red card. Then the floodgates. Then, finally, a 4-1 defeat that all but dooms them to an early exit for a second straight season barring a Yankee Stadium miracle.

“When you concede four goals away from home, it makes it really difficult for us of course,” he added. “It’s going to be a tough challenge but it’s a challenge that we are going to try to prepare ourselves and get ready for it.”

From the offset, NYCFC didn’t look ready for the challenge of Tuesday’s match. The team in front of them was a motivated Crew side, one riding the momentum of a big win over Atlanta United and the atmosphere of a crowd in open rebellion against the team’s opener. There was no doubt the Crew would come out of the gates hot, and they did.

Still, NYCFC created a bulk of the chances, squandering each and every one. David Villa uncharacteristically missed a few shots, clanging one memorable effort off the post just before halftime.

The game’s big moment wasn’t a goal or a chance, though. Rather, it was a dismissal. Alexander Callens, who started every game for the club this season, was sent off after VAR review caught his flying forearm to the head of Justin Meram. From there, NYCFC never truly adjusted, and the goals started to pour in.

“Red cards are always a game changer but at the end of the day, it’s up to us to be disciplined,” said goalkeeper Sean Johnson, whose botched handling of the Crew’s third goal may just have been the nail in the coffin. “We showed, being a man down, that we can press forward, create chances, and put a team on the back foot. It wasn’t the difference maker in the game. There’s still 10 players on the pitch with a lot of time left and it’s up to us to stay organized, limit opportunities while trying to press and get back into it.

“It wasn’t easy for us. I think they really put us under pressure straight away after the red card and they managed to score these two goals and we didn’t keep our calm,” Vieira added. “But I think when you have one man down, the team, the players have to do a little bit more and we didn’t do it. So when you go one man down and people don’t do extra, you will suffer. And we did.”

Still, there is at least a sliver of hope. With the away goal in hand, NYCFC knows a 3-0 win at home would send them through. Within Yankee Stadium and against this Crew team, a shutout is unlikely, but weirder things have happened in the MLS playoffs, right?

They’ll have to do it without Callens, and Vieira says he could move either Ethan White or Ben Sweat centrally to cover for the Peruvian defender. Whoever takes his place will need to keep the Crew quiet for any chance at a surge.

“At least we’re going to play at home, so I strongly believe that there is a big chance that we can do it,” Vieira said. “I strongly believe that we can do it. And it will be important for me to find the right words to lift the team and we have to be ready for the challenge. It’s a big one and this is the kind of challenge that will make us a good team or a great team.”

“There’s no hill big enough that we can’t climb,” Johnson said. “We’ve got the guys, we have a talented group. I think we’re mentally strong so we’ll get back to it and come Sunday, we’ll come out guns blazing.”