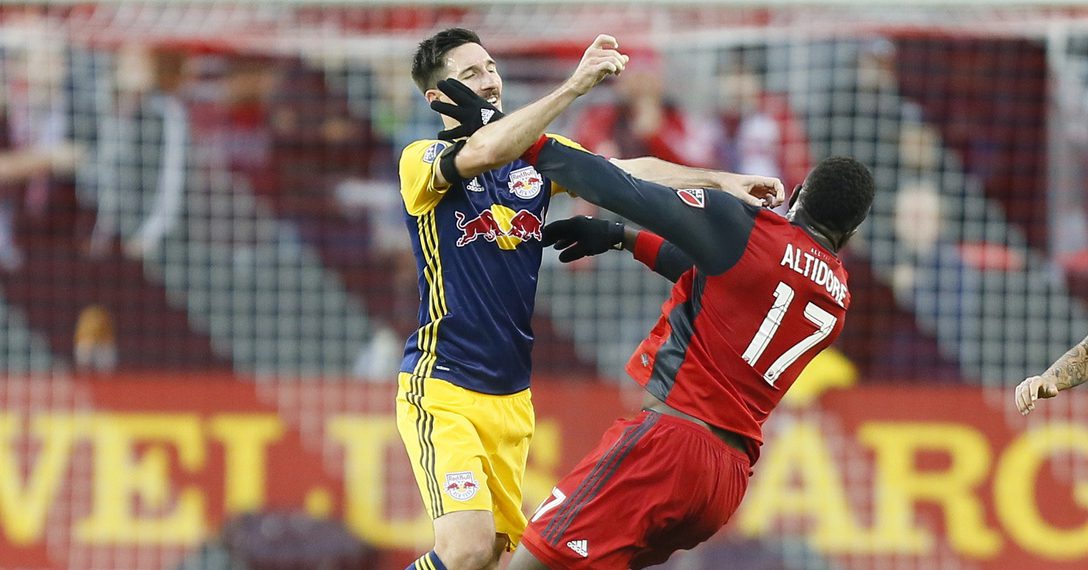 One week ago, Jozy Altidore was in the headlines for off the field incidents with New York Red Bull fans, calling them “classless” following leg 1 of the Eastern Confernce semi-finals. A week later, Altidore is in the headlines again.

During the second leg of the playoff series between the Red Bulls and TFC, Altidore played a part in two incidents, earning a red card during the halftime break.

First, Altidore took exception to a kick out from Tyler Adams on TFC’s Sebastian Giovinco following a hard challenge from behind that was whistled for a foul. Altidore approached the teenage Adams and grappled him, walking him around the field. The Red Bull’s captain, Sacha Kljestan, approached Altidore to break up the incident.

“Jozy went to stand over Adams, intimidate him. I came in, asked him to stop,” said Sacha Kljestan after the game. “Then he got in my face. I pushed him back … he fell down fairly easily in my opinion.”

As the match continued, the physicality continued to escalate drawing to a head at the halftime whistle. Tensions ran visibly high between the two sides as they retreated into the tunnel to head to the locker rooms.

That’s when things took a turn. With no official word on how the incident started, a brawl erupted in the tunnel between the two teams. Videos of the incident offered little explanation of what caused the brawl, but highlight the chaos of the incident.

Jesse Marsch and Greg Vanney can be seen at the end of the video screaming at each other and being separated by security. Marsch, a fiery personality on the field and the sidelines, can also be seen screaming in the face of TFC captain Michael Bradley.

However the incident started, both teams paid for it. Both Altidore and Kljestan were dismissed from the match. With Giovinco picking up his second yellow card of the playoffs in the match, he will be suspended for the first leg of the Conference final, along with the aforementioned Altidore.

Missing two of their most important players could spell doom for TFC, and it would be tragic for the Canadian side if it cost them the playoff series against the Columbus Crew.

After the match, tensions had still not cooled. Kljestan offered his explanation of the inciting incident.

“At halftime Jozy shoved me into the wall,” Kljestan said. “I have a clear conscience. I don’t feel like I deserved a red card. It’s a pretty helpless feeling, to not be able to play in the second half because of that.”

The nature of the incident lends itself to further punishment by the MLS Disciplinary Committee, and could keep Altidore out of action for additional playoff matches.

However, Vanney believes Altidore could be vindicated after additional evidence emerges.

“We’ve lost him as of now,” he said. “There is video footage, I think, of what happened in the tunnel. From my estimation and what I’ve heard, Jozy basically got ambushed in the tunnel and we’ll see where that goes.

“Jozy was followed in, basically confronted, he turned around and the next thing that happened, from my understanding, is that there were four, five, six Red Bull players rushing at him and towards him at the same time. The refs, we’ll see.”

Kljestan will serve his suspension to start the 2018 season.